2014: The Year Bristol Palin And Her Mom, Ol' Whatsername, Made All Our Dreams Come True 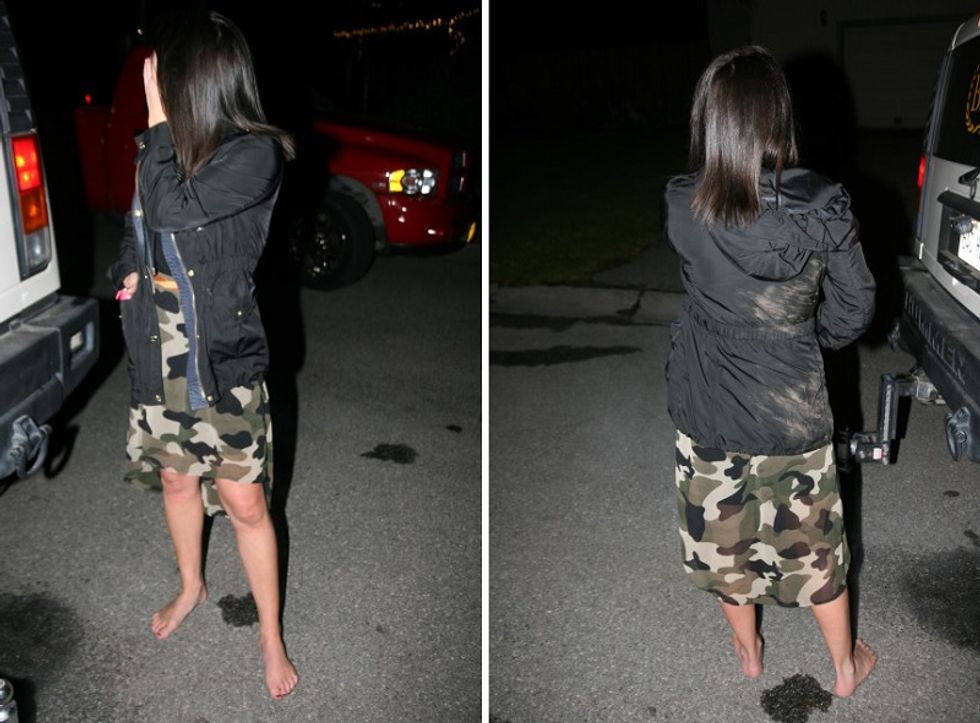 There's this lady, Sarah Palin, you wouldn't know her. She flitted through the public consciousness for a hot minute in 2008, and then wasnever heard from again. Haha, spoiler alert, yes she was. We're sorry. But aside from all Sarah Palin's usual hijinks, most of which involved either racism or grift (because like we said, "usual"), there was one glorious moment in 2014 in which all the Palin clan's true class became as crystal clear as the finest Coors Lite. And it lasted like a month.

We are talking, of course, about the Thrilla in Wasilla, the Throwdown at the Hoedown, the Great Palin Riot of 2014. It was a festive delight marked by Shirtless Track Palin trying to kung fu like six dudes at once like he was Dirk Diggler. Shoeless Bristol sucker-punching her host and screaming at people that they were cunts. Todd Palin trying to choke a dude out and ending up with a bloody beak. Sarah Palin screeching (for a change). Willow Palin mad-dogging middle-aged women. And. it. was. beyoooootiful. [contextly_sidebar id="Doc2aMmtZZjiNRU2qc1wdiLBhAwO7uDQ"]

It would be hypocritical of us (which is the greatest sin you can commit as a liberal) to pretend to be above family brawls and fisticuffs. Why, the night before our own wedding, a couple of our family members who shall be referred to as "our brother and our dad" did their best to get arrested in our front yard like they were George W. Bush and Daddy Bush going mano a mano old man. However -- and we think this makes it totally different, how about you? -- to our knowledge our family has always kept its alcohol-fueled cartoon violence in the family rather than showing up in stretch Hummer limos to other people's birthday parties and then trying (unsuccessfully) to beat fuck-all out of em. No? Just us? Huh, oh well. [contextly_sidebar id="b5q3TbaPq3Ex5eN5AHs2ACnQFQouE1LQ"]

After the news broke about the Palins' walk on the vicious side, there was much chest-beating on the right that we on the left were condoning violence against Bristol Palin. [contextly_sidebar id="7XDpgBjCTCGkDBMbLO5TJkcSEvRzOObe"]If you read the police report, which we did, that was a load of bubbling hog shit. [contextly_sidebar id="epPcf0KXxIhlMNCnRxObMGRzXb8BfBMj"]According to the approximately 17 million witnesses the police interviewed, all of zero said the party's host -- whom Bristol punched in the face repeatedly -- did anything but stand there and take it, until Bristol, having worn herself out and being, per the police report, "heavily intoxicated," fell down in the grass, at which point the worst tragedy possible befell her: she lost her sunglasses. Which she was wearing at night. [contextly_sidebar id="RbxtYSeiSi4rzkPDRH9x08tMVtz6zSoK"]

Want to listen to Track Palin saying things like this?

“Alright this is my old man,” Track said. “It’s his birthday, okay. So we’re at this party in Wasilla. Dude, surprise him with a new truck, new trailer, new wrap on the trailer. Everything was fucking kosher.”

As he described what happened, Todd Palin interjected periodically. Both Track and Todd agreed that the fighting started when “a father-son team” punched their friend, “Steve.”

“He’s like a little pussy you know what I’m saying?” Track said, referring to Steve. “Like he’s not gonna fight nobody. … Most innocent, basically a gay guy, but he’s not.”

Of course you do. [contextly_sidebar id="62DsgsTyaH2gy5SMl6U62YxQukmbxJh6"]

But of course there were many lessons to be learned from the Palin family's humiliating, classless debacle. Did you guess that lesson is "liberal media is too nice to Hillary Clinton"? Hot damn, you're good.

I’m sure you heard the happy news that Chelsea Clinton had a baby. But did you know her father-in-law and Clinton family pal Edward Mezvinsky is a convicted felon because of committing bank, wire, and mail fraud?

Of course, you didn’t. Because the friends and family of the revered liberal elite are treated like delicate China. Don’t handle too roughly. They are precious. They are off limits. Don’t push on them too hard.

That's right: in defending her own classiness and that of her family, Bristol Palin decided to call out Chelsea Clinton for ... marrying a man who didn't do anything but have a bad dad. (Had she decided to take a swing at Chelsea Clinton's grotesque NBC paycheck instead, that might have had something to do with "liberal media" or "Hillary Clinton" or even "Chelsea Clinton." Naturally, she did not.)

Does anyone else blame the liberal media for the Anchorage Police Department releasing a report that said (verbatim, we think) HOT DAMN THIS GANG OF DRUNKEN PALINS BE FIGHTING ERRRRREONE? If you said "John McCain," you win one more time! [contextly_sidebar id="nfe99UFocrX04x5rkbQ2rJWAYFYiom4a"]

“I think these family affairs are — I don’t know much of the details about it,” McCain told the TV station. “Things happen in people’s families and I’m not excusing it, I’m not condemning it. […]