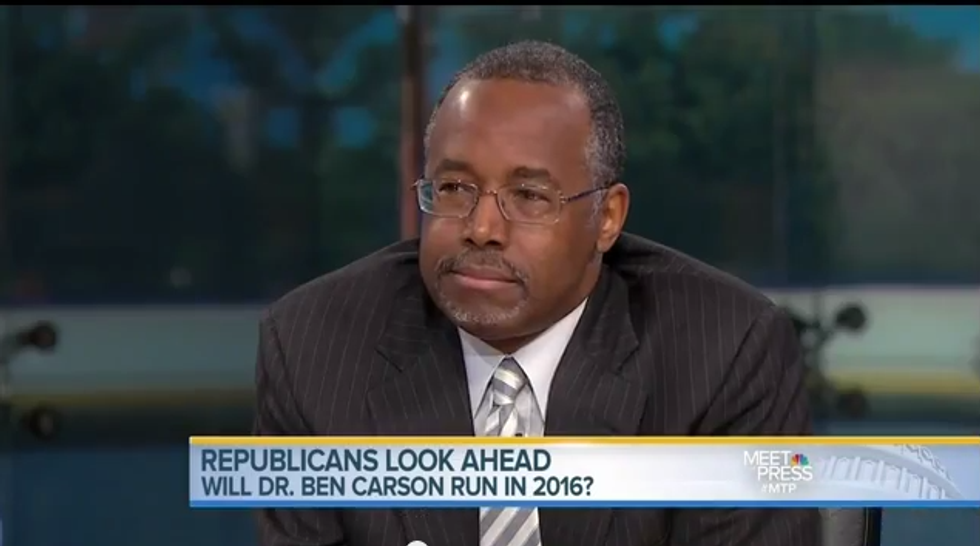 It's been a whole two days since the complete destruction of the Obama Regime, so of course that means it's time to get ready for the 2016 presidential campaign. And first into the fray, or at least the fraying pan, is Dr. Ben Carson, the guy whose every thought has to be brilliant because he is a highly respected neurosurgeon. As far as we know, he really is a top-notch neurosurgeon -- and that's an excellent reminder that some people really need to stick to their specialties. We wouldn't want Paul Krugman to try his hand at neurosurgery, either.

The Washington Times ran a nice puff piece today announcing a "documentary" that will air this weekend called "A Breath of Fresh Air: A New Prescription for America" -- get it? because he is a doctor! -- which "with [sic] give people across the country greater insight into his life and likely spur more speculation about his presidential ambitions in a week when the midterm elections gave a boost to many of his potential rivals."

The documentary, by the way, is from a totally objective source: it was produced by Carson's business manager, adviser, and interview wingman Armstrong Williams, who is also paying for the airtime.

Hey, why wait for the documentary? We can offer some insights into the life and thoughts of Dr. Ben Carson, too!

For example, Dr. Carson does not care for these liberal revisionist historians trying to turn your honor roll students into terrorists by focusing on all the wrong things:

In President Carson's America, we will instead "re-educate people about what America is" -- a once-great nation where it was good for his mother to raise him on welfare and food stamps, until Obama came along and turned government assistance into a bad thing:

When you rob someone of their incentive to go out there and improve themselves, you are not doing them any favors. When you take somebody and pat them on the head and say, ‘There, there, you poor little thing. … Let me give you housing subsidies, let me give you free health care because you can’t do that.’ What would be much more empowering is to use our intellect and our resources to give those people a way up and out.

Will President Carson MD also stand up for the sanctity of traditional marriage as well as traditional poverty? Of course he will! Not that it makes him a homophobe, mind you:

Well, a lot of people say ‘Ben Carson’s a homophobe because he believes that marriage is between a man and a woman.’ That’s ridiculous. [...]

I don’t think I can impose my will on any two consenting adults. They can do what they wanna do. I’m not going to try to stop them from doing that, but they don’t get to change the definition.

See how compassionate and tolerant our next president is? Why, he can even sympathize with a sportsball star who likes to beat up ladies:

[Let's] not all jump on the bandwagon of demonizing this guy. He obviously has some real problems, and his wife obviously knows that, since she subsequently married him. So they both need some help. And rather than jumping on a punitive bandwagon, let’s just see if we can get some help for these people.

Dr. Carson is perfectly qualified to diagnose Ray Rice's problems, because he is a doctor, in case you'd forgotten. So maybe he should stick to that doctoring thing?

I would recommend to everybody that they gain some basic knowledge of Ebola. Do a little bit of reading. You’ll discover that this is a virus that generally is transmitted in bodily liquids.

Ah, now he’s on a subject he really understands. Do go on with the educating, doctor:

So if there were a container of contaminated urine, and somehow it managed to find its way to some place, a lot of damage could be done.

What kind of damage does he mean?

Someone comes up to a lab worker. He knows he’s got the urine. "How would you like to have a million dollars?" A little transaction there ... Such things have been known to happen.

Huh. On second thought, maybe he should leave the doctoring to the experts too and find a new job that's so much easier than brain surgery. Carson for president!