2017: The Year Trump Put The Planet In Its Place 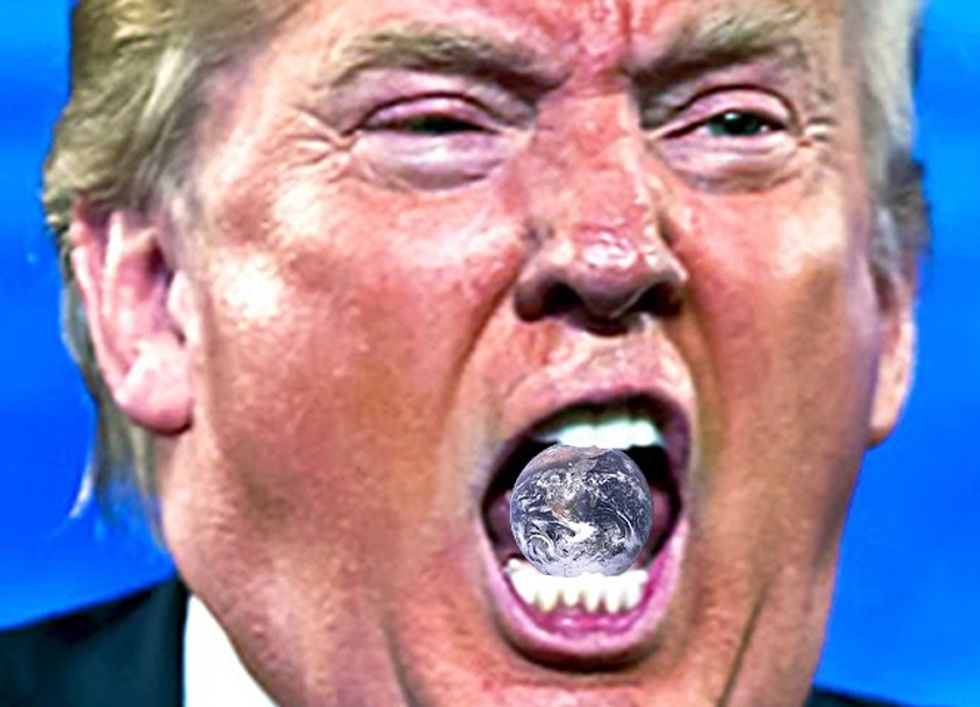 Thanks to clumsy apex predator Donald Trump, 2017 was not a great year for the prospects of large mammals like Donald Trump to continue inhabiting Planet Earth. The planet itself will be fine -- it's the living things on it that face a rough time, because the globe's most powerful nation is currently governed by an idiot who thinks global warming was invented as a ruse by China. While Trump will never achieve his dream of making coal great again -- largely thanks to market forces -- Trump's damned well going to do everything he can to wreck the environment, if only because that awful Barack Obama supported green energy and insulted Donald at the White House Correspondents Dinner in 2011. Let's look back at the sooty trail this guy's administration has left across the last 12 months.

Do we really need an environment anyway?

While none of Trump's cabinet appointees could even remotely be described as "good for the planet" -- except insofar as their mortal remains will one day contribute to the nutrient cycle of the soil -- Scott Pruitt at EPA has to be the most spectacular example of a cabinet member whose life goal is to subvert the mission of the agency to which he was appointed. When Pruitt -- then Oklahoma's attorney general and a wholly owned subsidiary of Big Oil -- was picked to head the EPA, he was actually in the middle of suing the EPA to weaken its regulations. As former EPA administrator William Ruckelshaus recently observed, with 14 lawsuits against the EPA, Pruitt actually learned a fair bit about how the EPA works -- by trying to keep it from working. Now that he's on the inside, he's having a much easier time taking apart the framework of environmental protection, from approving pesticides Obama's EPA considered too toxic to humans, to dropping a rule that required mining companies to have sufficient funds to clean up their own pollution.

EPA Chief Scott Pruitt, A IDIOT, Has Some Thoughts On Climate Change. They Are Idiot Thoughts

It was a nice biosphere while it lasted.

Pruitt got his tenure off to a great start by saying -- in opposition to scientific consensus -- the science is still out on whether carbon dioxide is a significant driver of climate change. Who can know, really? In March, EPA redefined the mission of the EPA's Office of Science and Technology to remove the phrase "science-based standards" from how drinking water would be regulated, preferring to go for standards determined by what various stakeholders decide is “technologically achievable” levels of any given pollutant. As we asked at the time, "What (FLINT!) could (FLINT!) possibly (FLINT!) go (FLINT!) wrong?"

By November, Pruitt had introduced new guidelines for who could serve on the EPA's Science Advisory Board. Nobody who'd gotten an EPA research grant was allowed, since they'd obviously be biased to advise for more science that could bring their labs some money. But industry lobbyists and technicians had never gotten such grants, so clearly they can bring a fresh, unbiased eye to setting EPA's research priorities. The fox isn't just guarding the henhouse, the bastard's got a General Electric M-134 minigun.

There is much more we could say about how awful Scott Pruitt is, but this is a New Year's Eve roundup, not an indictment. Keep the phrase "a mindless jerk who'll be first against the wall when the revolution comes" in mind. For fish-slapping, of course.

The Team of Evils

Scott Pruitt isn't the only mindless jerk chosen to deal with environmental policy, of course. There's Interior Secretary Ryan Zinke, who's dedicated himself to shrinking national monuments, and earlier this month, brought the head of a national park to HQ in Washington to chew him out for tweeting about climate change.

Over at the Energy Department, Rick Perry was pretty excited that he'd managed to "win" against climate science, yes this is a real Tweet:

He also explained that developing nations must burn all the fossil fuels they can, to prevent rape, and we decided he was only mostly a complete idiot on that one.

She's utterly unqualified and doesn't know beans about basic science. In other words, prefect for the Trump administration.

Also outside the Energy Department, but right inside the White House, Mr. Trump nominated Kathleen Hartnett White, a cattle rancher and dog breeder, to lead the White House Council on Environmental Quality, which advises the president on environmental policy priorities. She's yet another climate change denier and a very successful industry shill who fears that climate science is related to paganism, since it's all just earth-worship, and also that the UN wants to use climate change policy to institute that eternal boogeyman for the right, a Godless One-World Government that would sap our national sovereignty and deprive our houseplants and forests of beautiful, life-giving CO2. Good-ish news! Democrats have so far been able to block White's confirmation, and last week sent her nomination back to the White House. Team Trump will have to decide now whether to renominate her or name someone else; unfortunately, renomination seems likely.

Fine, So We Won't Always Have Paris

In June, Trump proudly announced the United States would be pulling out of the Paris Climate Accord, and virtually everything he said about the agreement to reduce greenhouse gas emissions was a lie. Under the Paris framework, the carbon reduction goals for each nation, and the steps nations would take to reach those goals, are determined by the nations themselves, but Trump said that all the other countries in the world had ganged up and imposed carbon reductions on the USA to put America at a competitive disadvantage. He lied about the economic costs of reducing carbon emissions, claiming there would be vast job losses when in reality it should be possible to both reduce CO2 output and have robust growth. And in a particularly ugly riff, he claimed that the standing ovation delegates gave when the agreement was voted upon -- because for once, a real commitment to protect the planet had been reached -- was actually a celebration of the US being put at a permanent economic disadvantage.

Trump's decision to ditch Paris was met with cheers from the usual assholes, like rightwingers who were delighted at the prospect of wrecking the atmosphere to make liberals sad. Look at all the funny!

Out in sane-people land, beyond the general consensus that the whole world was laughing at Trump, coalitions of state and local governments quickly announced that, regardless of Trump's declaration, they were committed to sticking with the prior US commitments to reducing emissions and using more green energy. So did any number of large corporations, which suggests they think disappearing coastlines and extreme weather might not be good for business -- and that they're aware the Trump administration represents a temporary blip in environmental policy, not a permanent shift.

Trump EPA Will Make You Eat Coal, And You Will Like It

Look, no one's actually USING the atmosphere, are they?

In October, Scott Pruitt announced the EPA would take formal steps to repeal Barack Obama's Clean Power Plan. To underline the point, he made the announcement at a coal mine, just to make clear the administration was giving Paris the bird (an oil-soaked pelican, to be precise). It had to be a proud moment for Pruitt; four of the lawsuits he'd pursued against the EPA were in opposition to the Clean Power Plan. The lawsuits seeking to prevent the rollback have already started flying, and will only increase when Pruitt eventually introduces a regulatory framework intended to replace it.

Believe In A Place Called Hope. Until It's Paved Over.

Now that we've thoroughly depressed the fuck out of you, we'll close with some Resistance-y thoughts, the most important of which is the reminder that it will take four years for the US to fully withdraw from the Paris Climate Accord. Which means we can reverse course back toward sanity in 2020. Beyond that, much of the rule-making needed to dismantle environmental protections is subject to public comments, and to lawsuits, so the Trumpers won't get everything they want just by fiat. Courts have blocked some EPA attempts to loosen rules on methane and other pollutants, and just last week a federal court gave EPA 90 days to put in place new standards to protect kids from lead paint instead of taking years more to "study" the problem, as if it were unclear whether lead paint is a neurotoxin.

If America isn't going to lead on climate, other countries will. After Trump rejected the Paris agreement, hundreds of American climate scientists applied for grants to move to France and do their work there; earlier in December, Emmanuel Macron awarded long-term grants to 13 Americans (and five others) to do exactly that. No matter what Trump does, coal remains an outmoded, dying energy source whose days are numbered. Smart entrepreneurs should consider opening solar cell, wind turbine, or high-efficiency battery factories in Appalachia.

The Republican Wrecking Crew is in the middle of what Charlie Pierce calls "an ongoing smash-and-grab on all the policy wishes they’ve fondly cultivated since 1981," because they know Americans are likely to boot the lot of them. But they can and are meeting with plenty of opposition, and the damage they want to do isn't inevitable. For the sake of all us large mammals, let's do all we can to stop them in time to get back on track toward a sane environmental policy.