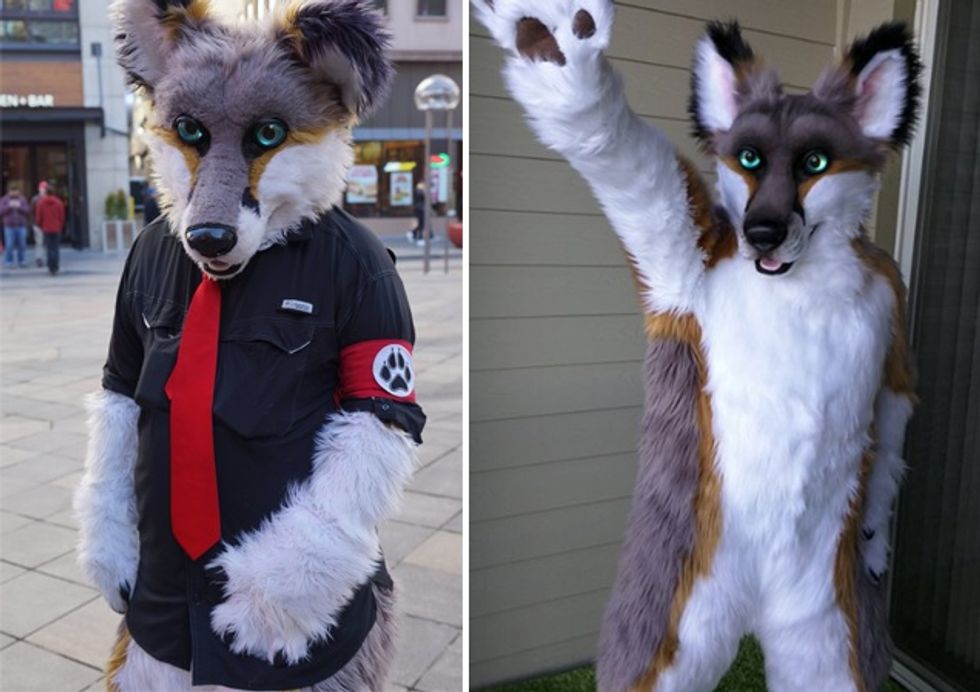 Now we light the bin on fucking fire, because this is your year in fucking Nazis!

We started the year off with broke fucking Nazis who can't figure out how to pay for a rally permit. We learned that fucking Nazis are flat-earthing and for some reason messing up furry conventions. We are still wondering why a fucking Nazi site decided to make a Spanish-language version.We learned there was fucking Nazi pizza. Oh, and Richard Spencer got punched. Twice.

Oh man. I'm just going to take a second here and enjoy that. You should too, because while many people engaged in a lot of soul-searching over whether punching a fucking Nazi is or should be protected political speech, we can all agree that there are some human beings who just fucking need a solid punch and that Richard Spencer is one of them. That the Internet remixed this into that Happy song and Springsteen and Motorhead (RIP LEMMY) and Ride of the Valkyries and hundreds of other songs is just people understanding that we all have a responsibility to bring some joy and light into the world.

2017 is also the year a lot of people learned that fucking Nazis don't like being called fucking Nazis, because they think that parsing their shit you to "oh, I'm not a fucking Nazi I'm just a white identitarian" is some shit we care about. If your area of study is fucking Nazis then you should know all the flavors they come in, but otherwise? Some of them are fucking KKK Nazis, and a few are fucking generic Nazis and some are fucking Nazi Nazis but they're all fucking Nazis.

Speaking of what kind of fucking Nazi someone might be, remember when the Trump Administration appointed literal ones, in the form of a dude who wears fucking Nazi medals to parties and also Steve Bannon generally? Hell, even the greatest hits of yesteryear came out to play when Sarah Palin tweeted out a Nazi slogan. But in case you were worried we wouldn't see any fresh faces, Steve Bannon talked a fucking Nazi into primarying Paul Ryan.

There were fucking media Nazis! There was all the coverage of the dapper fucking Nazis and the fucking Nazis next door in our papers of record, because what we needed was a story about Fucking Nazis: They're Just Like Us! Jeff Lord got fired from CNN just for saying sieg heil to someone online, which made everyone talk about whether that was free speech and whether it was unfair to fire someone just for a bit of heiling and anyway screw that guy. There was Bill O'Reilly before he got FIRED FOR BEING A PERVERT defending Trump's comments after Charlottesville. There was Milo, full stop. There was Alex Jones, generally, but especially here, because Alex Jones knows who the fucking Nazis are and it's the Jews, no not even kidding, the Jews are the fucking Nazis apparently:

Oh also it turns out fucking Nazis don't make for great feminists. Like the time the fucking Nazis encouraged dudes to take off their condoms to impregnate white women. Then there was the time that the ladies of the alt-right started sounding suspiciously like weird lefty feminists talking about how the fucking Nazi men needed to respect the women and whatnot. Which is weird, because you'd think most women would have the sense to know that a moevement full of men who talked about how great men were and how they were gonna impregnate all the women would probably try to impregnate all the women and be super-misogynists, but OK ladies of the alt-right?

Sadly, we have to talk about the rallies. First there was Portland's "free speech rally," and then there was Charlottesville.

You don't need us to remind you of the details of those days. On the second day of coverage, my four-year-old came running into the kitchen shrieking "you will not replace us" because kids just repeat shit without context and CNN ran that audio as a teaser before break every chance they got. We all have those torches that that angry mob burned into our psyches. We will not link you here to the gang beatings or the homicide. We know about them, and it's goddamned heartbreaking.

The President of the United States of America couldn't bring himself to unequivocally say that fucking Nazis were murderous scumbags. The fucking Nazis celebrated. They thought about picketing the funeral of the woman they'd killed over their ISP booting them, and now her mother can't let them find out where she is buried.

On the up side, Chris Cantwell! (I have a personal policy of never naming a fucking Nazi because I don't believe in adding to their press clippings. But in the case of this dude we make an exception because Chris Cantwell cried like a toddler separated from his mom at the playground when he found out that being a militant fuckbag in Charlottesville might land him in legal trouble. Oh, and then the first three lawyers he tried to get wouldn't represent him so he wound up with cut-rate cosplay Ben Franklin.)

Then the fucking Nazis tried to hold another rally in Boston which went really poorly for them, and then they canceled their other rallies except this one in Tennessee and now they're scurrying around the country, ducking warrants and infamy in a few cases at least, and we think it's pretty great that they can't ever show their faces in normal society without being gripped by the terror of capture and that for the rest of their lives they'll never be able to fall in love and settle down with a woman, nor be home to see their children. They can find no gainful careers to build, no friends that aren't paranoid and gripped by hate. They can't even use Spotify. Justice is slow, but sometimes the universe finds ways.

There are still fucking Nazis online, of course, but hot damn do we love it when fucking Nazis try to go about their internet business until someone finds a picture of them heiling something and alerts either Facebook or the media.

Now this is not a happy yearly roundup post. This is about fucking Nazis. And so it is with a heavy heart that we list -- incompletely! -- these names, each of whom was a person killed by a white supremacist this year. They are:

I come firmly down on the side of punching fucking Nazis, and I always will. I understand the arguments for non-violence and I can only envy the supreme grace it must take to read this list and not feel such rage welling up somewhere deep inside you that rules be damned there won't be a fucking Nazi that is safe in America until they've learned to stay under their rocks in the shadows where they belong. I lack that kind of grace.

These cowards, these pathetic excuses for men and women, would have us believe that there is something to be admired about quivering abject fear, that there is virtue in their twisted misapplication of logic and morality. They think that if they scream enough people will listen.

There is an insidious truth about white supremacy, though, and it is that there are millions of people in this nation who would never pick up a torch or say a racial slur aloud and are still racist as hell. It is racist to complain about a protest for black lives. It is racist to support the deportation of sick infants. It is racist to share articles about the millions being made in the newly legal pot industry with comments about how it's great for the economy without noting millions of largely black and brown people sit incarcerated for having or selling some weed. Racism comes in a scale, from tiny shit to being a full-blown fucking Nazi.

In 2016, we learned that white supremacy was coming back into fashion in a lot of circles. In 2017, we saw it enshrined.

We live in a society where it's easy to feel helpless and unheard but I swear to you both as someone who covers fucking Nazis for a living and knows a bit about their Kryptonite and as someone who's half an activist: The most effective weapons against hate are rage and love.

I'm talking full-on righteous rage, the sort you might feel when you saw a bully hit your kid. The kind that isn't on your own behalf. The kind that puts a terrible look on your face and warns anyone else to come try it even though you'd never hurt a fly. And I'm talking the love that doesn't even consider yourself, the sort that makes you reckless and daring. The kind of love that would make you do uncomfortable things in defense of what's right.

Because here's what happened when the fucking Nazis showed up in Boston, and if anything will beat them, it's this:

This is the first video I've seen that really shows the disparity between the "free speech" rally and the thousands of counter-demonstrators pic.twitter.com/Lca2J3vhsc

Wonkette loves you all, except the fucking Nazis.