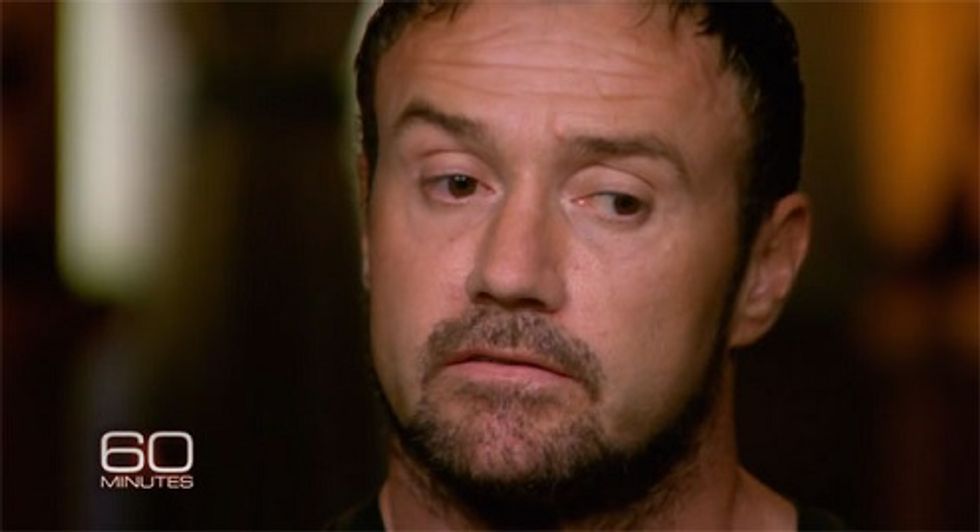 You may recall that60 Minutes had an explosive True Facts About Benghazi story from a whole week ago? Yeah, us neither. But there was this one guy on the show, a security contractor for a British company, who revealed Shocking New Truths about the attack, and he was so secret that they had to conceal his identity and let him use a fake name -- "Morgan Jones" -- to protect him from the enemies of freedom. Except for the part where everybody pretty much knew that he was a guy named Dylan Davies, and most of what he said on 60 Minutes was very different from what he wrote in a report to his employer immediately after the events in Benghazi. Turns out that instead of bravely scaling the wall at the diplomatic compound and rushing to the hospital to see the body of Ambassador Chris Stevens, Davies actually spent the whole night at his beach house because he couldn't get past roadblocks. But someone did show him a photo of Stevens' body, so that's almost the same as a heroic dash to the hospital, right?

And now that his story is unraveling, Davies is going into full Media Victim mode, complaining of a "coordinated campaign to smear him," because those media meanies keep on pointing out the inconsistencies between the his original report and the story he told on 60 Minutes (and in his new book, which isn't at all destined for the remainder bin). Because -- taa-daah! -- he now says that he was lying in his incident report right after the attack, so he wouldn't get in trouble with his superiors at the security contracting company. He told the Daily Beast that:

the version of the events contained in the incident report matched what he told his supervisor, called "Robert" in his book, who is a top Blue Mountain Group executive. Davies said he lied to Robert about his actions that night because he did not want his supervisor to know he had disobeyed his orders to stay at his villa ...

"He told me under no circumstances was I to go up there. I respected him so much I did not want him to know that I had not listened to him," said Davies, referring to Robert. "I have not seen him since."

See, he lied, but only in his original story. The story he's telling now is totally the truth. Also, there was something in there about this woman who's his mother, or his sister, or maybe his mother and his sister. Forget it, Jake, it's Benghazitown.

Sort of makes you admire the journalistic ethics of Fox News, which initially interviewed Davies, but then said, "nah, mang, go away now" after he started asking them for money. CBS has no problems with him, though, and stands by their story, possibly because CBS owns Simon & Schuster, which is publishing his book, a detail that somehow didn't quite get mentioned in the 60 Minutes story.

Asked for comment, the ghost of Dan Rather said that heads should roll at 60 Minutes, although Dan Rather peevishly points out that he is "still alive." Sure, like he has any credibility.