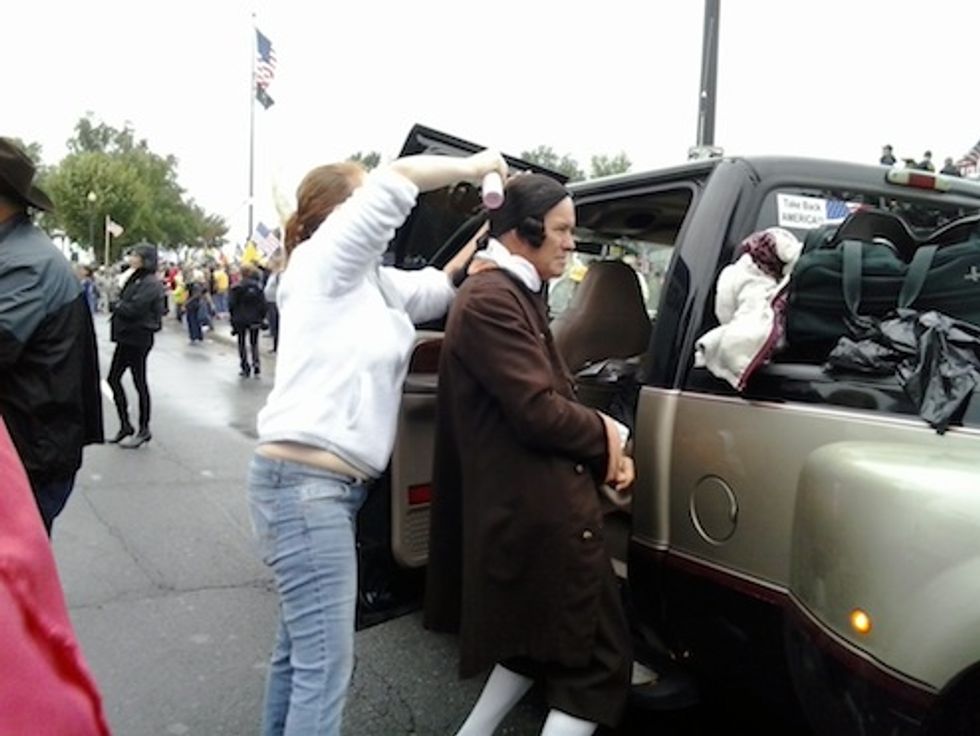 There were not quite one million veterans at the World War II Memorial on Sunday morning. When your correspondent arrived at 8:30, having already passed a cluster of Oath Keepers staging on the Starbucks patio at 18th and I, about five hundred people were peaceably assembled in the open space of the memorial. Whatever violence had been done to the Barrycades had already transpired, as they were lying defeated in heaps next to busted-open sandbags, festooned with flags.

With an improvised sound system that was not quite up to the task, the program was soon underway: the Pledge of Allegiance, the National Anthem, and words of encouragement from some of the nation's illustrious electedofficials,one of whom has, at the time of this writing, completed a term in office.

There was the Smoker on Strike, her decked-out car covered in enlightening information: George Washington’s smoking and tobacco farming didn’t stop God from blessing our nation, for example! Also, Adolf Hitler started the whole silly idea that smoking gives you lung cancer.

There was Captain America and his 20-foot flagpole.

There were semis and dump trucks, hashtags and arrest-Obama slogans written on their doors, rolling past on 17th at parade speed and drawing people into the street until the Secret Service and Metro Police came out to block them at the southern side of the mall.

Then the crowd, supposedly united by a common purpose, began to fracture due a desire for self-important grandstanding by a subset of its population, which is a situation that has no parallel in modern-day Washington. The more subdued and serious among them, for the most part, moved to the west, toward the Vietnam Memorial. The more loudmouthed and likely to be carrying Impeach Obama signs and confederate flags moved to the north, toward the White House.

In the end, the President’s visitors were merely a source of annoyance for law enforcement, curiosity for the Segway tourists, and befuddlement for one guy who tragically had to suit up for work on a Sunday. This city, man.

In the midst of all the hullabaloo, a sweet gentleman named Ted who had come all the way from Texas paused to take a picture with your humble correspondent. He was in town for work but wanted to show his support for the veterans, even though he had never served in the military himself. DC is full of inspiring stories if you just take a moment to listen.