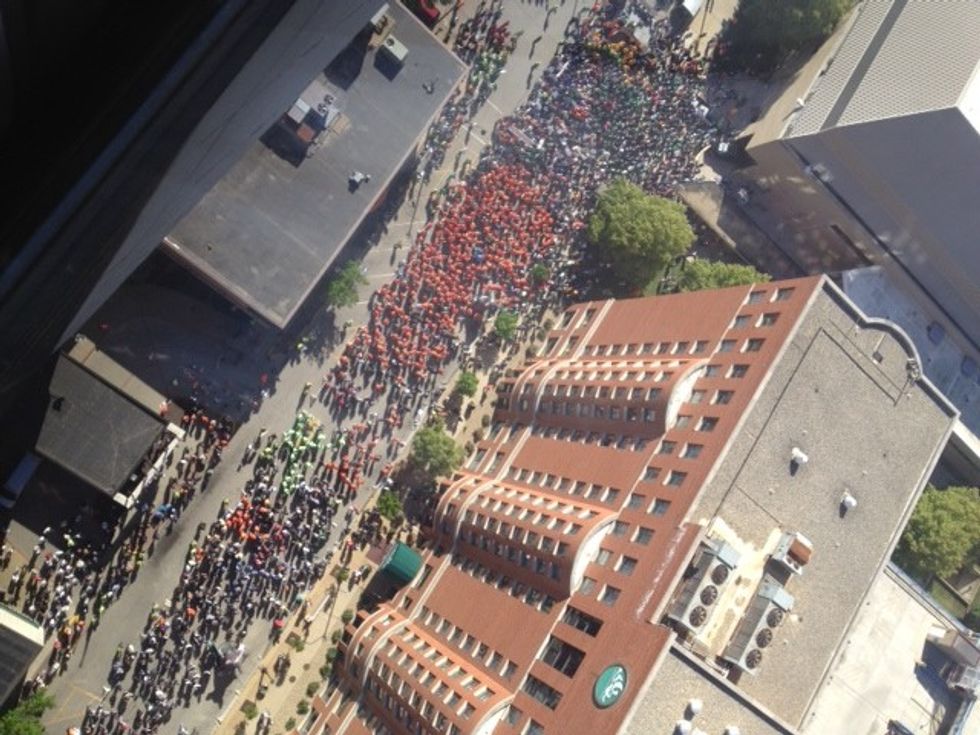 Wonkette Operative "obfuscator2" sends us this thrilling account of rabid Wisconsin Union Thugz being unacceptably Radical, with their "peaceably assembling."

Hello, you vile leftists! This photo was taken a few hours ago outside the Abraham Lincoln Hotel in Springfield, Illinois (EVERYTHING in Springfield is named after honest abe. Except for the gay bars, ironically).

ANYHOOZLE, Scott Walker was there to speechify as a guest of the Illinois Chamber of Commerce. About three thousand radical marxist trade laborers, teachers, firefighters, and other public sector employees/Union Thugs turned out to welcome Governor Walker and offer a large bag of kettle-cooked chipotle dicks for him to eat.

I was fortunate enough to cross paths with this sad creature. He APPEARS to be a James O'Keefe wannabe. He walked nervously through the crowd, taking video footage with his iTabletPad the whole time. I followed him and heard him whisper "now someone is following me" into the tablet's mic. He used the same tone of voice as that scared woman

with the runny nose in the Blair Witch Project. I was going to warn the people in the general vicinity not to take the bait if faux'keefe (sorry) tried anything, but everyone he spoke to was civil and even friendly. He eventually gave up. Douche-fail. [Via "obfuscator2"]