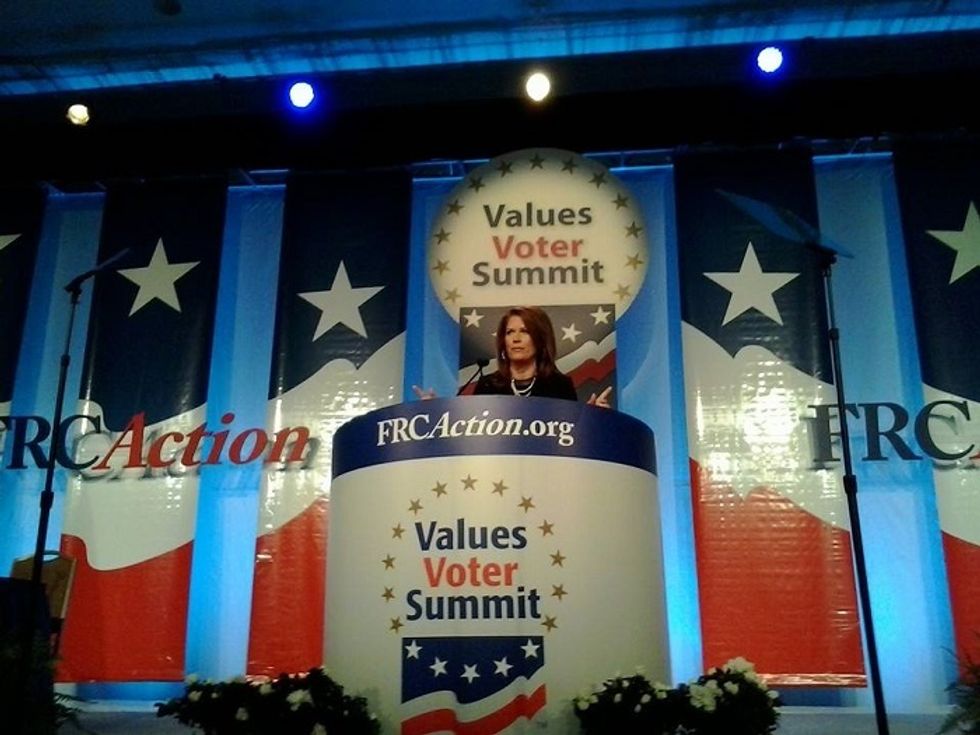 While watching soon-to-be-former-Rep. Michele Bachmann tell the Values Voter Summit Friday morning that she is a "normal real person," the sense of just how great a source of comedy we are losing with her upcoming retirement really hit home. Is there even a reason for Wonkette to go on existing once old Crazy Eyes walks off the House floor for the final time and flies back to a life of hot dish suppers and plagues of foster children? We’re going to mention this to the Editrix if she ever surfaces from her long sex tour of the West Coast.

We dove into the archives to put together a treasury of Bachmann’s greatest hits and quickly realized there is way too much for one post, so look for yr Wonkette’s ebook Michele Bachmann: A Life Without Lithium, coming to your KindlePod sometime between soon and never. In the meantime, here are some of the congressnut’s greatest hits.

As we know from her habit of collecting foster kids the way some people collect Hummel figurines, Michele is always very concerned about The Children. Which is why she opposed Dr. Barack Moreau’s plans to run medical experiments on the helpless kids streaming across our border. Not that she wouldn’t also love to send all those disease-ridden waifs back to whatever filthy Third World hellholes they came from, but better that than keeping them in an America where they could catch mental retardation from the HPV vaccine or get gay-raped by lecherous gays who want to do away with age-of-consent laws so they can prey on the underaged. Though luckily her husband, Marcus, who is a totally butch heterosexual male, will be happy to cure you if you contract the gay, so long as you can pay for “services rendered,” wink wink. See, migrant children? Michele is looking out for your best interests.

Also, some of those kids could be Muslim sleeper agents looking to commit jihad on innocent Americans, and national security is one of Michele’s areas of interests. And from her perch on the House Permanent Select Committee on Intelligence, she has been a tireless defender of the homeland, willing to ferret out Islamic infiltrators of our federal government. Like her fellow Minnesota representative Keith Ellison, the only Muslim member of Congress, or Huma Abedin, longtime adviser to Hillary Clinton. Michele accused both Ellison and Abedin of having ties to the Muslim Brotherhood, which did 9/11. Everyone knows that, it’s science.

Benghazi, though? That was all God. Unless it was Satan’s agent Barack Hussein Obama. He might also be responsible. It’s very important to Michele that American Jews know that Obama is the Anti-Christ, and only she has the chootz-pa to tell them about it. Wow, we had no idea! Thanks, Michele!

Not everything about Michele Bachmann is wine and roses, as her Iowa campaign staff found out when she ran for president in in 2012. And also her New Hampshire staff. And also her national campaign staff. And we haven’t even gotten to the rumors about why she’s really retiring from Congress. Don’t believe her excuse that she wants to devote all her time to praying to god to make Obama repeal Obamacare. That’s just crazy talk.

Please share some of your favorite Bachmann moments in the comments we may have missed as we say Auf Wiedersehen to One-L. Not that she’ll know what that means. After all, she’s not German, she’s Swiss.