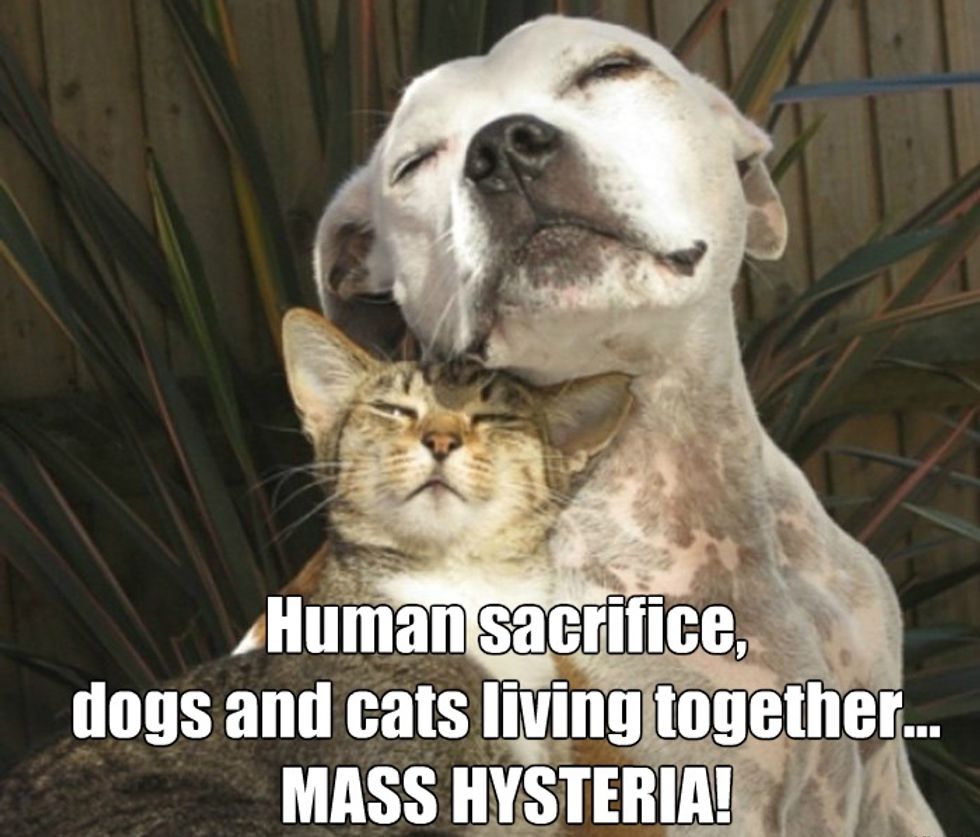 We hear that the president's giving a speech tonight -- not that the broadcast teevee networks will bother carrying it -- and while the full details of the executive action aren't out yet, Republicans know it's pretty bad. Here are just a few of the Psychic Predictions of disaster they're floating:

Soon-to-be-former congressharpy Michele Bachmann is worried that the nation will be flooded with illiterate know-nothings, and while you'd think she'd embrace them as her natural constituency, you'd be wrong, because these would be brown Democrat illiterates, and she is worried that executive action to not deport people who are already here would really involve bringing people into the country, because apparently Mexicans Are Magic:

“The social cost will be profound on the U.S. taxpayer -- millions of unskilled, illiterate, foreign nationals coming into the United States who can’t speak the English language,” Bachmann told reporters at the Capitol, The Washington Post reported Wednesday.

“Even though the president says they won’t be able to vote, we all know that many, in all likelihood, will vote,” the Republican lawmaker added. “The president has a very single-minded vision. He’s looking at new voters for 2016.”

But do not call Michele Bachman a meanie for those comments -- she is simply reporting what the illiterates told her:

I’m not using a pejorative term against people who are non-American citizens. I’m only repeating what I heard from Hispanic-Americans down at the border. That’s what they told me.

Tip to Ms. Bachmann: When your source is a guy in a white hood, the fact that his nametag reads "Hi! I'm Pablo!" probably doesn't count for a lot. On the other hand, Mexico's 94.2% adult literacy rate might also suggest that the Hispanic-Americans down at the border haven't done their research, either. Ah, but are they literate in English, huh? Compared to Michele Bachmann ...

If a horde of illiterate brown Democrats isn't scary enough, how about the ever-reliable specter of panic in the streets? It did so much to stop Ebola and ISIS after all. Retiring Sen. Tom Coburn warned in a USA Today interview that things could get ugly, not that he's telling anyone to make things ugly:

Coburn went on to say that since Obama's not going to "work with Congress" -- which has done such admirable hard work on not passing anything in years -- executive action would be a big mistake, because it sends a dangerous message to Americans:

"Here's how people think: Well, if the law doesn't apply to the president ... then why should it apply to me?"

Hey, you guys all remember the riots and the looting and the violence when Ronald Reagan and George H.W. Bush signed executive orders on immigration, right? Lawlessness is just so ugly.

Iowa congressmelon Steve King warned last week that if Barack Obama took executive action on immigration, the nation would be thrown into a "constitutional crisis" because of the unprecedented usurpation of power that has never been seen before in our great nation, apart from the executive orders on immigration issued by every president since Eisenhower. King fretted that if Obama does this thing that only ten out of ten previous presidents have done, the consequences would be unfathomable, and would also end American Exceptionalism somehow:

This is about defending our oath to the Constitution too. We cannot allow Barack Obama’s anticipated, unconstitutional act to be implemented, for if it is it will destroy the pillars of American exceptionalism. Come what may, we must always protect the Constitution.

Protector of the Constitution and Sovereign Moron Rand Paul knows exactly what to do if Obama does, in fact, singlehandedly destroy the rule of law forever by making a sweeping immigration enforcement decision that no other president named Barack Obama has ever done since 2012: Sue him to make him cease his unspeakable attempt to keep together families who have lived and worked in this country for years.

“Our founders were very clear ... [in] the Constitution that the Congress writes the law,” Paul added. “The president himself has admitted as many as 15 times, saying he’s not a king, he’s not an emperor and he can’t write the law. So really, the media needs to be asking him why he’s changed his mind now.”

Paul was also quite sure the Supreme Court would eventually rule against the president setting any kind of enforcement priorities, which we suppose makes sense. Sure, the Supremes never overturned any of the previous ten presidents' immigration orders, but then again, it never invalidated the Voting Rights Act or said that corporation have religious beliefs, either.

On the other hand, there appears to be some likelihood that Barack Obama may have at least consulted a lawyer on this, according to a fancy-pants attorney interviewed by the Huffington Post. Cornell law professor Stephen Yale-Loeher, who you might think ended up at the wrong university, explained how an executive order just might not throw the nation into total disarray:

“Constitutional crisis is in the eye of the beholder,” Yale-Loehr told The Huffington Post. “The president, I’m sure, has consulted with his legal advisers to make sure that it will withstand legal challenges. Ultimately it will be up to the courts to decide who’s right on this.”

And the courts have tended to be fairly tolerant of presidents' ability to set deportation priorities, as we all may recall from the fact that nobody got tossed out of office for doing so. Even a speaker at the rightwing Federalist Society convention acknowledged that "the case law is robust" on presidents' authority to decide whether to deport some classes of immigrants. Still, many on the right hope that bumper sticker slogans will ultimately prevail over mere "Constitutional law" and "legal precedent." Hey, Federalist Society, what part of "illegal" don't you understand?