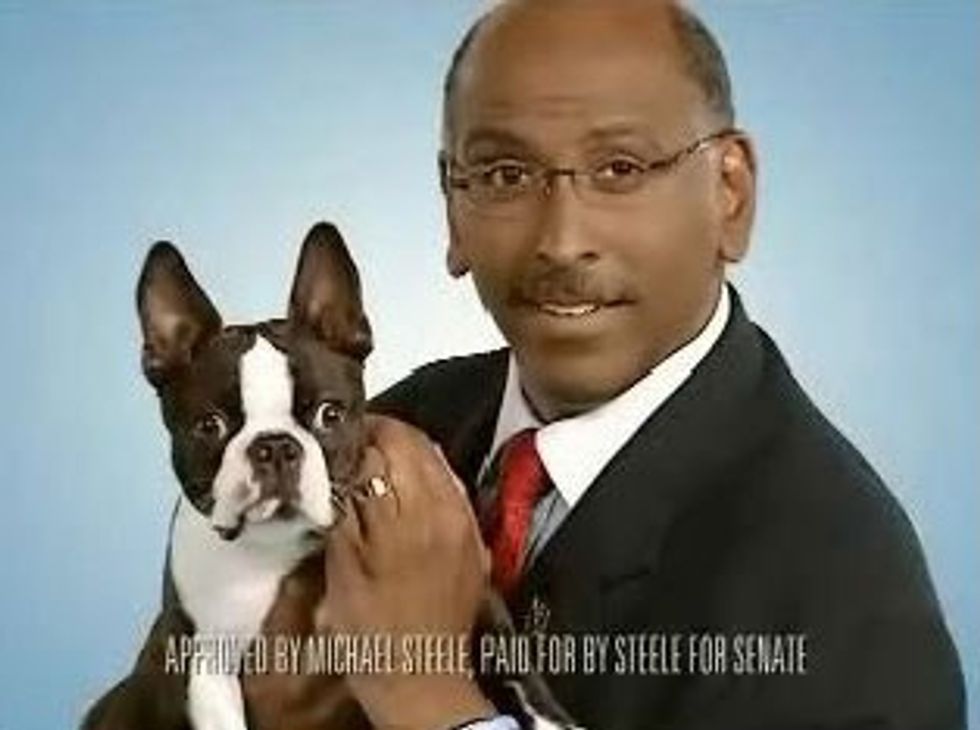 Congratulations toMichael Steele, who finally beat out that actual Confederate slaveowning plantation owner to become the first African-American President of the United States! Maybe we should celebrate with something fun, like a national WAR WITH IRAN, hmm? Well, even though we were *praying* for the old white guy -- a member of a whites-only country club! -- to come from behind and "steele" the black person's victory at the last minute, we are "steele" satisfied with Michael "Steele." Let's "steele" away to our Wonkette Time Machine and revisit a hilarious chapter in state political history: Michael "Steele's" brief and mostly unsuccessful political career in the important state of Maryland!

Michael Steele was just your average Maryland state chairman of the Republican party -- a thankless job if ever there were -- until 2002, when then-Congressman Robert "Bobby" Ehrlich, the Republican candidate for governor in a state that had had all Democratic governors since 1965, decided "You know what I need on my ticket is an African, to win African votes." After an extensive search through the state ranks of the Republican party, Ehrlich's team finally discovered one (1) of these, kidnapped him, and suddenly Michael Steele was your lieutenant governor candidate!

Ehrlich's opponent was then-lieutenant governor Kathleen Kennedy Townsend, one of RFK's 74 Catholic children, who easily took the nomination because it was "her turn." 2002 was a strongly Republican-favoring year (9/11!), and Bobby Ehrlich is basically the same person as Lee Atwater, leading to this classic, mysterious and altogether hilarious episode -- perhaps the last great legend in wacky politics before the YouTube era (copied wholesale from Wikipedia, which has truly outdone itself in dry humor):

After a September 26, 2002 gubernatorial debate, which had occurred without reported incident, Paul Schurick, Ehrlich's communications manager, claimed that the Townsend campaign handed out Oreo cookies to the audience. Five days after the debate, Steele said that one or more Oreo cookies had rolled to his feet during the debate suggesting a racist statement against him. "Maybe it was just someone having their snack, but it was there," Steele said. "If it happened, shame on them if they are that immature and that threatened by me." At the time of the debate, Schurick had not mentioned any such incident, but in November 2005 he claimed "It was raining Oreos... They were thick in the air like locusts. I was there. It was very real. It wasn't subtle." In a November 2005 Hannity and Colmes appearance, Steele agreed with Hannity that cookies were thrown at him. Neil Duke of the Baltimore NAACP, who moderated the debate, praised the "passionate audience" and noted their "derisive behavior" but did not see such behavior. "Were there some goofballs sitting in [the] right-hand corner section tossing cookies amongst themselves and acting like sophomores, as the legend has it?" Duke said. "I have no reason to doubt those sources; I just didn't see it." The operations manager of the building where the debate was held, interviewed three years after the event by the Baltimore Sun, disputed Steele's claim and said "I was in on the cleanup, and we found no cookies or anything else abnormal. There were no Oreo cookies thrown." Some eyewitnesses including AP reporter Tom Stuckey who was at the event have said cookies were handed out. Other eyewitnesses could not corroborate Steele and Schurick's claim.

And... Ehrlich and Steele won the election!

Ehrlich was up for re-election in 2006, the worst year for Republicans in history, and no black lieutenant governor would help him this time (we know this as a fact, actually, because after Steele left the ticket, Ehrlich simply picked another black guy off the street to replace him, and they lost.) So Dick Cheney and some other people forced Steele to run for the state's vacant U.S. Senate seat against Rep. Ben Cardin, whose paltry political career included such fake achievements as becoming the state Speaker of the House at age 35, and then a Congressman for 20 years.

Steele had only one option for beating boring old Ben Cardin: making a series of wacky political ads, with his dog and trashcans and a great big STEELE logo made out of actual pretend "steel," the metal. They're classics:

Steele was surprisingly within shooting range of Cardin on election day, and Bobby Ehrlich wasn't completely out of his gubernatorial race either, so they conspired to close their respective races with this little bit of politicking from Gov. Lee Atwater II:

On November 7, 2006, committees supporting Bob Ehrlich's gubernatorial re-election campaign and Michael Steele's Maryland senatorial campaign recruited seven busloads of homeless Philadelphians to distribute fake voter guides in Maryland. The fake sample ballots, labeled as an "official voter guide", misleadingly described both candidates as Democrats and were handed out to mostly poor and black voters in Prince George's County in Maryland. Workers said that first lady Kendel Ehrlich personally gave them T-shirts and hats and thanked them. However, Ehrlich claimed to be unaware that these workers were hired from Philadelphia. The campaign tactic was widely criticized by Democrats for confusing and misleading voters.

And then both Ehrlich and Steele lost their elections by 10 points. Ehrlich went on to host a trashy wingnut radio show in Maryland (still on the air!), and Michael Steele became, today, the new hope for the Republican party, somehow, the end.