A Children's Treasury Of Thoughtful, Measured Reactions To Jan Brewer's Veto Of SB 1062 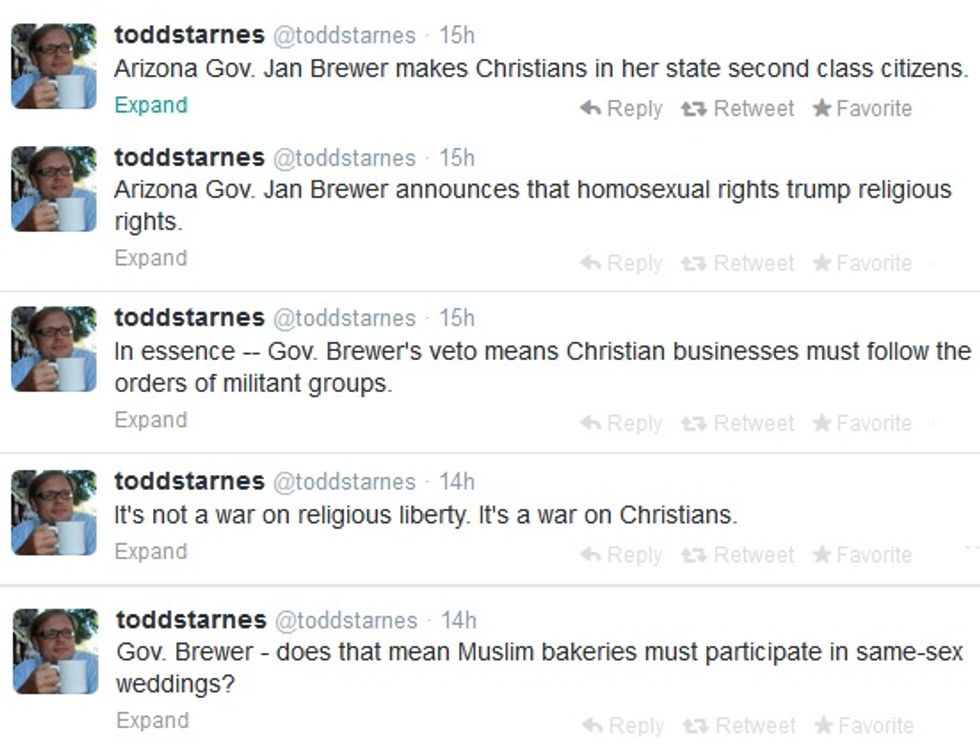 Jan Brewer's uncrazy veto of SB 1062, the "No Dogs or Gays" bill, is not that big a surprise -- unless of course you're certain that your ability to keep God happy depends on being free to tell people to GTFO if you dislike what they do with their mooshy bits. If that's what you believe, then what Jan Brewer did was to stomp liberty into the ground while wiping her ass with the Constitution and cramming the gay agenda down your throat, because that's really what this is all about. The implications are chilling -- people whose businesses are open for business will actually have to sell stuff to people, regardless of what they think God's opinion of those people is. Needless to say, freedom is over, as the American Patriarchy Association's Bryan Fischer correctly tweeted:

Ah, Bryan. Your tears are just the perfect final ingredient for the Big Gay wedding cake.

Over at Dead Breitbart's Temple of Umbrage, squeaky-voiced Simpsons teen Ben Shapiro explained that despite Brewer's contention that the law would have been divisive, what's really "divisive" is the veto, since it

sends the message that it is open season on private religious business owners who wish to live out their religious principles throughout their lives, not just within the four walls of their churches or homes.

Yep -- just like the Civil Rights Act of 1964 declared it open season on people who thought the Bible commanded them not to let black people stay at their hotels. And look what a repressive hellhole we live in now!

Ah, but Shapiro does not buy the comparison to Jim Crow, because in the Bad Old Days, segregation was enforced by state law, but private choices to discriminate are perfectly OK! Also, Shapiro rejects the analogy between race-based discrimination and discrimination against gay people anyway. Just watch him logic this out:

Any analogy between refusing to service same-sex weddings to refusing to serve black customers is fatally flawed. Race is an immutable characteristic; homosexuality is only publicly known due to homosexual behavior. No matter how much you may be attracted to a member of the same sex, no one will ever know unless you choose to divulge that fact, or to engage in sexual activity with someone of the same sex ...

What it comes down to, finally, as Shapiro tweeted today,

Folks, you don't have the right to demand something from another private citizen. Period.

Reliable source of unreliable hyperbole Todd Starnes explained that because of the veto, Christians will now have to ride in the back of the bus:

Answer to that last one: By golly, what it means is that if someone seeks to sue a Muslim bakery, the bakers can't claim that they're entitled to discriminate based on their religious beliefs. Is that really so difficult to understand? And in cities like Phoenix, Tucson, and Flagstaff, which have anti-discrimination ordinances, those bakeries could indeed be sued if they discriminate. As for participating in gay weddings, not sure where you got the idea that Arizona allows same-sex marriage...yet (and your bitterness will be delicious then, too).

And finally, thank heaven for Michele Bachmann, who can always be trusted to come up with something incredibly stupid to say. On CNN yesterday, shortly before Brewer actually announced the veto, Bachmann told Wolf Blitzer that there'd be dire consequences for Freedom if SB 1062 were vetoed, explaining first that that we need to be fair to everyone, especially people who want to discriminate:

Fair enough! We agree, people who object to gay rights should be free to go on TV and talk to Wolf Blitzer. But what if we don't let people actually act upon those beliefs? asked Blitzer. That's just preventing discrimination, right?

“Oh in fact, it’s just the opposite,” Bachmann explained. “This is a decided level of intolerance — it’s effectively eviscerating the rights of freedom of speech, expression and religious expression for the people of Arizona, and it sets a terrible precedent.”

"What we’re talking about is tolerance on both sides. And it is not tolerant to force people to violate their religious beliefs. That’s not tolerance."

It sure is discriminatory to treat people who want to discriminate so shabbily. Freedom, it is dead. But here's an idea: If people really can't stand the idea of selling goods and services to everyone, maybe they should consider going into a line of business that doesn't involve selling goods or services to the public.