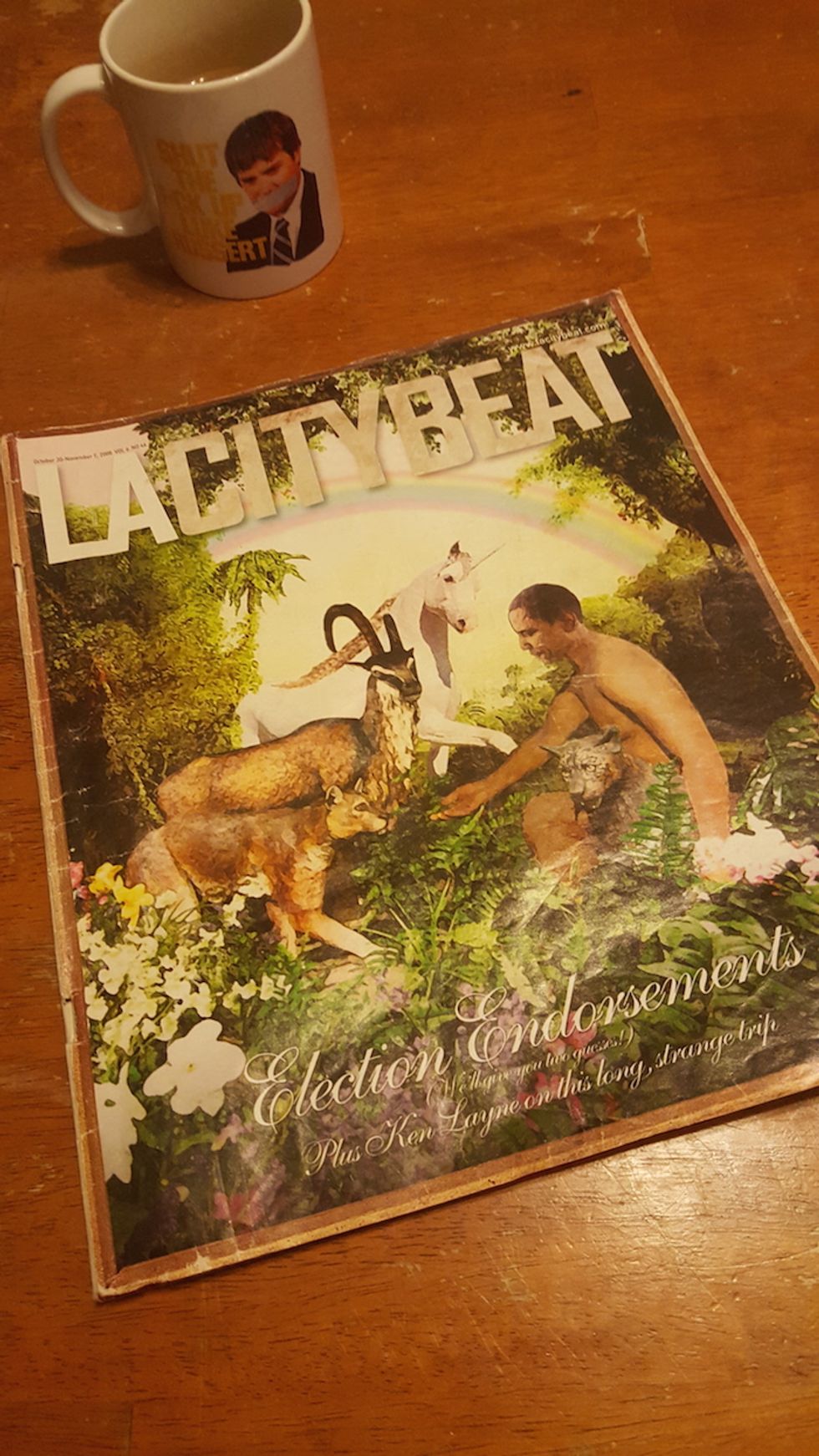 This is the endorsement I wrote of Barack Obama in the Oct. 30, 2008, issue of LA CityBeat, a small weekly Los Angeles newspaper of which I was the best editrix. As you will see, I was incredibly prescient.

Yes. Barack Obama is a magnificent human being. He is smarter, prettier, and better-dressed than you, and he can shoot threes from way downtown. When he went to Europe and the Middle East, they treated him like he was King of the World. The king of Jordan drove him to the airport -- physically drove him, like, behind the wheel of his kingmobile -- himself. People could not get enough of the Good Time Happy Face Reunion World Tour. This is, in fact, a good thing. See, there used to be a time when people loved us -- people besides Pinochet and Yakov Smirnoff. That could happen again. What a country!

Obama's not a stupid guy. He's not gonna fuck off during Katrina or when he's informed Bin Laden is determined to strike inside the US ("You've covered your ass now," Bush sneered to the guy who'd come special to Crawford to brief him on the hair-on-Fire Al Qaeda chatter. That is real and true.) The worst thing he'll do is maybe get a little centrist. He'll maybe pander a little. (In fact, he already has.) He's definitely going to be given to secrecy, though it's emprirically impossible for him to be more secretive than the guy we got now. And as long as he doesn't Sista Souljah another Welfare Act to get those Cadillac-drivin' welfare queens like Reagan never could -- as long as he's just sort of centrist as opposed to shitty Clinton Third Way -- we will stand behind him even when he calls for "clean coal." (We will then cheerfully and sedately register our opposition and calmly rally our Daily Kos.)

So Obama's swell and awesome, and we know that already. Everybody knows that already. Some dude had to take his name off all McCain's advisory committee letters last week, because he'd just voted Obama.

But even better than having Barack Obama and his beautiful family reclaiming the White House for decency and elegance and grace is the prospect of having Old Handsome Joe in the Naval Observatory. We love Joe Biden with a love that's pure and true. He doesn't pander; he speaks his truth, even when it's best left unsaid. He's sentimental -- even maudlin -- like the best drunken Irishmen. he's passionate, and yelly, and even when he knows he's right (which is always) he doesn't condescend. Fuckin' Joe Biden, man. He's all right.

Replace "clean coal" with "fracking," and I was dead on. So what does our official endorsement of Hillary Clinton look like? We're gonna go with this:

Hillary Clinton will be a better liberal than you (or we) gave her credit for. She'll focus on helping both the working class and the middle class; she won't actually give anything to Wall Street beyond a thrumming economy and stable stock market.

She'll have a hell of a fight on her hands getting anything done with her stupid Congress, that has not yet realized its constant obstruction is a bug, not a feature. She'll use executive actions wherever possible and won't give two flying shits when people bitch about it.

She will not fix racism or sexism. But her Justice Department will continue the excellent work done under Obama in leaning on state and local police who take a little too much target practice on "certain communities."

She will fuck with Russia's internet.

The FBI will continue to be out to get her; she will not fire them all, as she should, because then people will scream and wail and gnash their teeth about politics. They will be UP HER ASS.

She will most likely, at some point, be impeached. Probably for the goddamn emails. Maybe for "Clinton Cash," because fuck her for doing charity, right? The impeachment will be exhausting for the nation, and we will all get ulcers and cry a lot, and then, when it doesn't force her from office, the fever will break.

It'll be a pretty good four years, on balance. You can't fix crazy, but if anyone can work around crazy, it's Hillary.

She's got a good head on her shoulders most of the time. And she punches you in the nose if you don't take care of the fucking bunnies.