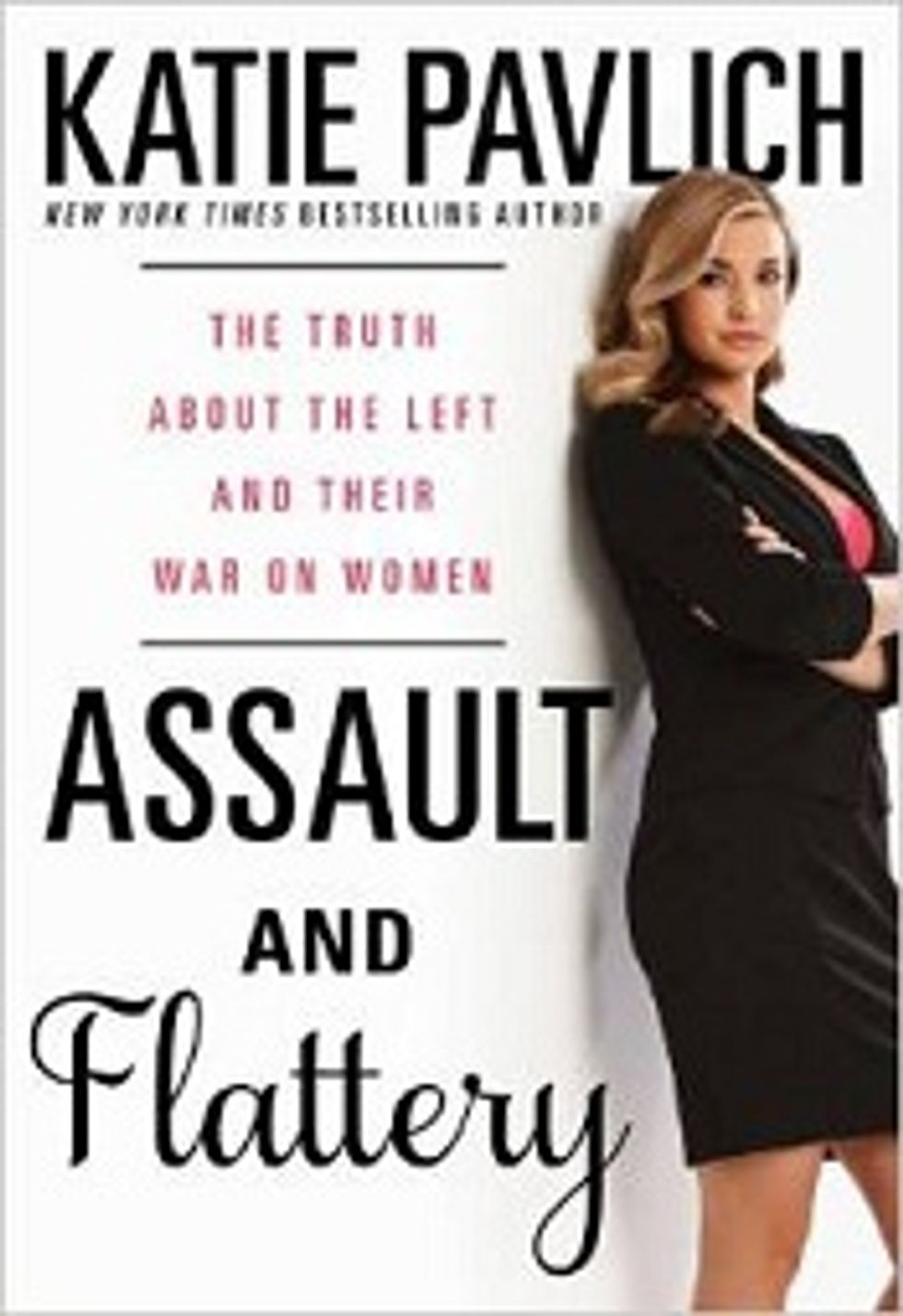 Today is D-Day for one of the most anticipated events of the year around yr Wonkette’s newsroom, for it marks the release of Katie Pavlich’s book-like substance,Assault and Flattery: The Truth About the Left and Their War on Women.We’re so excited! Not excited enough to actually spend $25 on the goddamn thing and help Katie’s book-like-substance sales, or make the trek to the library, or download a copy to our Kindle. Then we might find ourselves feeling obligated to read the entire thing and risk falling into an abyss of self-loathing and despair over our career choices. But we can read the free preview on Amazon and review that, which is about as much attention as this thing deserves.

We know we’re in for some good reading just looking at the list of chapter titles: Lynching the GOP; Barack Obama: The Most Anti-Woman President Ever (this is the same Barack Obama who signed the Lilly Ledbetter Fair Pay Act and put coverage of contraceptives for women in his massive health-insurance reform bill, right?); The NRA: America’s Real Pro-Women’s Group… Good thing we’re not reading the book, because the material could not possibly be funnier than these titles. Katie, you’ve already peaked! But let’s read the rest of this free preview anyway.

This is a good start, from page 2:

This is an egregious lie about Fluke’s testimony to the House Democratic Steering and Policy Committee, which she spoke to after oily weasel fart Darrell Issa would not let her testify to the full House Oversight Committee about the Affordable Care Act. Fluke, using Georgetown as an example, argued that health plans at even religious schools and other institutions should cover contraceptive care for women because its expense was a financial and medical burden to low-income students who might need, say, contraceptive hormones to manage illnesses like polycystic ovary syndrome. She wasn’t asking for coverage so that she and the other female law students at Georgetown could fuck with the abandon of meth-addled bunny rabbits. Which Katie and whatever intern at wingnut imprint Threshold Editions was assigned to "fact-check" this tripe could have discovered with about five seconds of Googling. But research is hard, and sometimes the facts you learn are inconvenient.

Should we even mention the shitty things wingnuts -- including some women! -- have been saying about Sandra Fluke in the years since she testified? Eh, probably best not to confuse Katie any further.

Katie contrasts how Limbaugh was treated in the aftermath of his comments with Martin Bashir's skewering of Sarah Palin after Bashir suggested in a fit of righteous pique on his MSNBC show that someone should take a shit in the Quitter Queen's mouth after she compared taxes to slavery. Katie argles and bargles about how no one – Rachel Maddow, the National Organzation for Women – criticized Martin Bashir! Which is funny, because we seem to recall the criticism of Martin Bashir was so strong HE WAS FORCED TO FUCKING QUIT HIS OWN SHOW. Rush Limbaugh, despite losing some advertisers, is still going strong and on Monday was spewing his enlightened views on contraception all over the airwaves. Good example, Katie!

Let’s go on to the next page and see what other prominent leftists Katie calls out for poor treatment of the Dipshit of Denali. Here we go: “liberal pervert and pornographer Larry Flynt.” Oh please, Larry Flynt is your big example of leftist misogyny? Let’s just skip ahead a bit.

The rest of the introduction – those pages visible in the free preview, anyway – is just a list of liberals who said mean things about conservative women, which leads us to suspect this entire book is 200-plus pages of Katie playing “Gotcha!” along the lines of when the wingnuts holler “We’re not racists, Dems are the real racists because KKK! Robert Byrd!” Which means this entire book is likely 200 pages of Katie venting her usual conservative victimhood claptrap while completely missing the point of the whole “War on Women” meme, which has to do with public policies that hurt women rather than what specific activists and known comedians might say about them. Do even purportedly liberal men make crude and sexist statements sometimes? Yes. Does this mean that all leftists are conducting some sort of war on women? Certainly not. Is our opinion that Katie Pavlich is dumber than a bag of hammers based on her espousing of wingnut bullshit and not on her gender? We assure you, we would think just as little of this book if it had been written by Sean Hannity.

But maybe we’re wrong. Maybe this book is Fair and Balanced. Why, just look at some of the subjects listed in the index: Michael Skakel, Chappaquiddick, the Kennedys and rape, Obama and golfing, four pages on sex-selective abortion, the progressivism of Woodrow Wilson … yep, we bet this is a real barn burner. Call us when Dinesh D'Souza adapts it into a documentary.