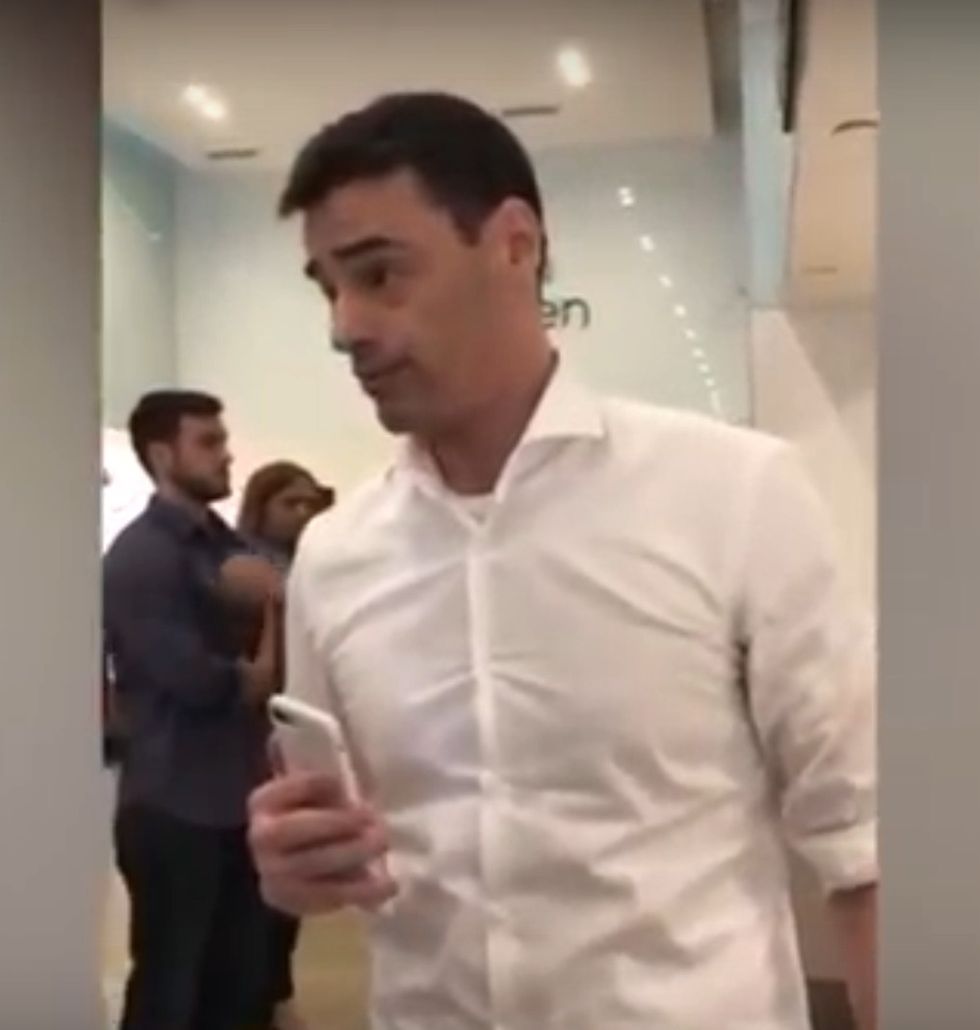 Aaron Schlossberg wants you to know he is not a racist, he’s a Diversity Supremacist, just like you! In light of his apology that is not really an apology, we have decided to rewrite that shit, line by line, just to demonstrate what a complete tool he is.

First, let us take a trip down memory lane and watch how fucked up this guy is so we can see his idiotic evolution in real time.

We first met Aaron when he decided to take his white ass to Fresh Kitchens in Manhattan and order some food and start some bullshit with food service workers who literally are not paid enough to deal with his nonsense. After hearing some Spanish spoken, this warrior for MAGA jumped right in to demand that the employees shut that Spanish speaking stuff up, RIGHT NOW!

After landing his hot like fire threat to call immigration on some complete strangers just because they spoke Spanish, and getting laughed out of the restaurant, Aaron was sure that was the end of it. Unfortunately for this exceptional American, the media was like, “hey, how do you feel about your racism going viral?” and he was like, “No comment, bye!!”

You thought it would end there? Oh, you sweet summer child.

Time for a fucking Mariachi band.

Well, Aaron’s bad week just got badderer, because people were seriously enjoying trolling him after they saw his performances (yes, performances; Schlossberg had made a bit of a name for himself freaking out, racistly, at people on the street. There was the time he screamed at a guy that he was an "ugly fucking foreigner" (white dude was from Massachusetts), and the time he screamed at some ultra-Orthodox guys they weren't real Jews. Guy just can't stop getting CAUGHT ON TAPE!

You have to see this.

My friend @MoreWillie was randomly assaulted on a New York sidewalk and called "an ugly fucking foreigner" by Aaron Schlossberg all the way back in October of 2016. He posted this back then.

Willie, by the way, is a white man from Massachusetts. pic.twitter.com/hBboS5gc0J

This is how Trump supporters treated Jews supporting Palestine today in NYC. #CancelSarsour#IStandWithLindapic.twitter.com/gIOqMY6WgK

So we're clear, dude has made a habit of screaming really racist stuff at strangers on the street, si claro?

Anywho, on to the apology break-down!

Here is the “apology”:

“To the people I insulted, I never expected any consequences. Seeing myself online made me realize I could lose money from this shit. Everybody thinks I’m a fucking racist and it hurts my feelings and it is exactly who I am. I see people are acting super sensitive like baby snowflakes, and trying to make me poor, I resent that so hard. I should be able to say whatever the fuck I want about “Illegals” and "dirty foreigners" and "paying their welfare (while they work!)" so why are you all up in my ass? I was right on point and fuck you, MAGA! The video was FAKE NEWS! All of you Diversity Supremacists are deep state punk ass liars, I’m a NATIVIST, not a RACIST. One of the reasons I moved to New York is so I could lord it over dark people and you have completely ruined my game. I love America because of the white immigrants and all of the types of white people who are the best this country has to offer. Again, I am really tired of being trolled like I have trolled others, so, please shut the fuck up and let it go. Thank you.”

Fuck you, Aaron. Nobody believes you.

Don't forget to donate now to help us keep fighting racists like this guy!