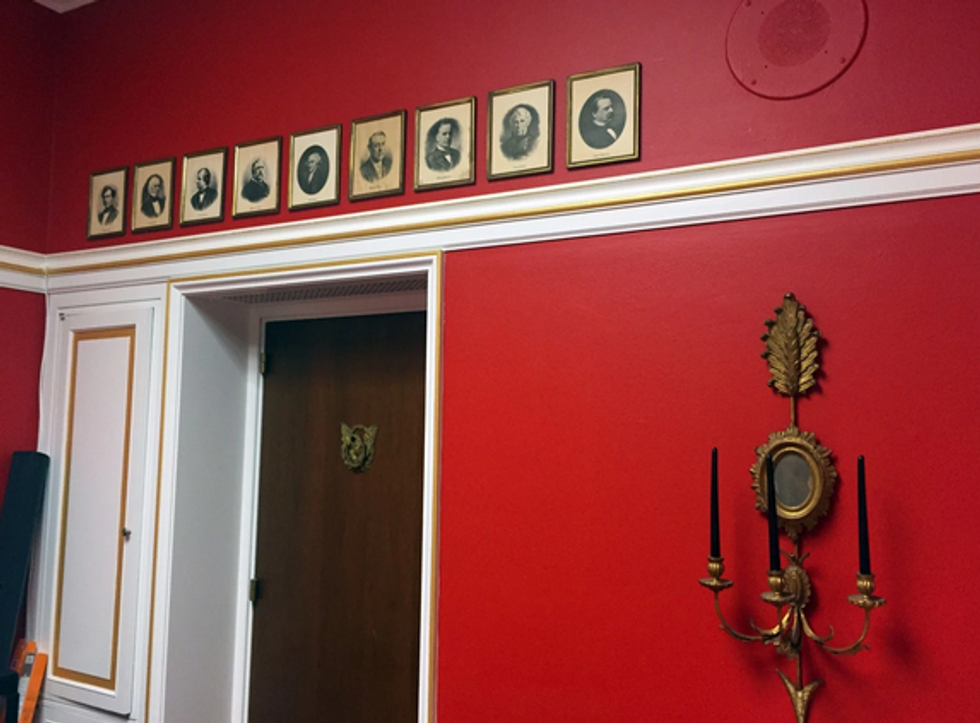 Aaron Schock, the sexy darling wingnut from Illinois, is not gay again, despite recently surfaced news that he has had his entire congressional office redecorated to look like the dining room on the Downton Abbey teevee program:

Bright red walls. A gold-colored wall sconce with black candles. A Federal-style bull’s-eye mirror with an eagle perched on top. And this is just the Illinois Republican’s outer office.

“It’s actually based off of the red room in ‘Downton Abbey,’ ” said the woman behind the front desk, comparing it to the luxurious set piece at the heart of the British period drama.

Oh, that is normal. When your Wonkette becomes a congresscritter, we are having our office decorated to look like The Max from Saved By The Bell. So, how did America's Next Top Heterosexual make this office transformation happen? Well, he saw this interior decorator's work in a magazine (PROBABLY PENTHOUSE) and he called her to say "Hey girl," and boom, Not Gay Downton Abbey office appeared:

She introduced herself as Annie Brahler, the interior decorator whose company is called Euro Trash. She guided me to Schock’s private office, revealing another dramatic red room. This one with a drippy crystal chandelier, a table propped up by two eagles, a bust of Abraham Lincoln and massive arrangements of pheasant feathers. [...]

Brahler met the congressman in his district years ago, and he was impressed with her work, which he had seen in magazines. She likes to say that she can turn things ready for the trash heap into something beautiful.

Cool. So why did this turn into a story? Oh, because a certain congressman was probably too busy matching blue belts and white pants, separating his purple shoes from the green ones, or catching up on gay twink diver Tom Daley's Instagram, that he hadn't even SEEN his new office yet, and here was a reporter in the office mucking it all up before the big reveal!

So there was a back and forth between the reporter and the staff of Congressman "Good Game, Bro," and they were all going to get to see the office together, until Schock suddenly changed his MIND and was like "don't wanna talk about my office, it's mine, you can't have it":

I told him if I could be there when Schock first saw the office, I would hold off till then. Cole agreed, and we reached the Red Walls Accord of 2015.

That is, until Schock decided he wasn’t interested in doing a whole story about how his office is decorated.

“He’s happy to talk to you, just not about the office,” Cole said, sounding very tired of the ordeal. “I’m really sorry and want you to know this is not fun for me.”

I imagine it IS tiring to constantly fluff the tail feathers of such an esteemed heterosexual congressman, especially when that congressman is also kind of vain and vapid and knows he's pretty. The communications director also reportedly contacted the WaPo reporter afterward to add that he's not sure if Schock has even SEEN Downton Abbey, or any shows at all, or even knows what a television IS, god, we pity his poor staff, how many Sudden Explosions Of Gay do they have to clean up in a typical week, and how do they possibly get anything else done?