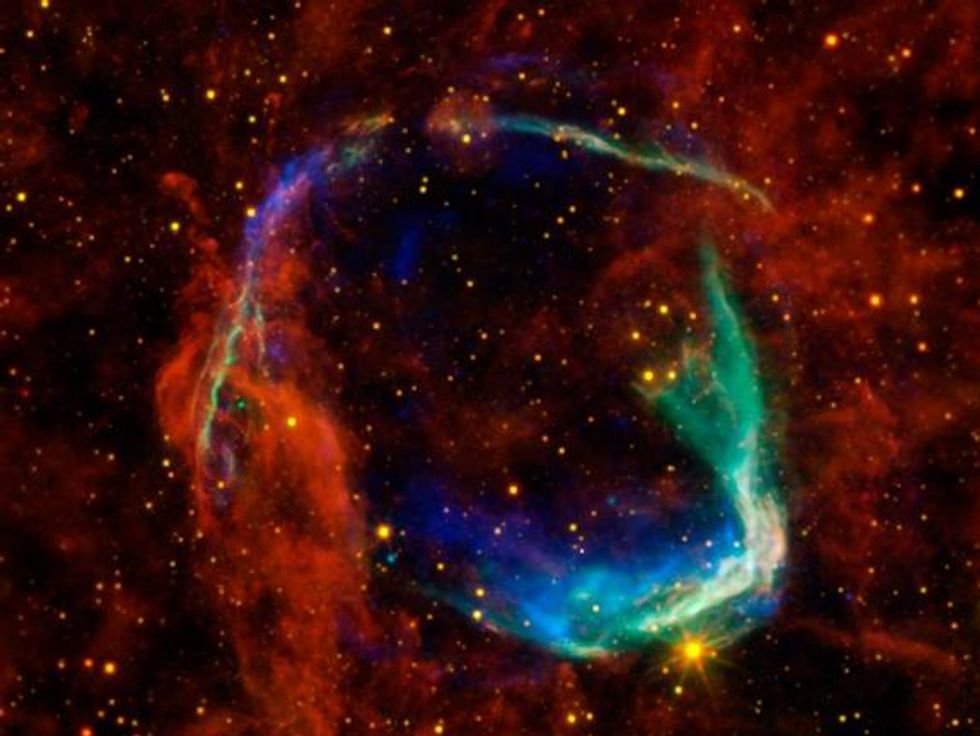 Hello, Wonketeers! It's time for another bizarre & disturbing Wonkette Sci-Blog. Get out your phones and come on in -- we're Drunk Dialing Congress!

We were looking forward to devoting this week's blog exclusively to the celebration of one of the year's most anticipated holiday seasons: Cephalopod Awareness Days. However, as you all know we're almost two weeks into the meaningless shutdown of the U.S. Federal Government and still careening towards this coming Thursday's economic default. Now I feel compelled to continue chronicling this international embarrassment of an ongoing crisis in our government. I am truly sorry. It's hardly the Nice Time post that would make me happy to write about, but these are not nice times.

The relatively sane adults remaining in DC are now actually speaking (well, some of them still are) and working with each other to reopen shuttered agencies, restart Federal programs, pay Federal bills and avoid the global catastrophe of U.S. debt default. Whether anyone can talk the House Dumkopf Conference into anything less than total victory remains to be seen -- they only listen to their very own tunes. This ridiculous shutdown standoff has to end sometime. If it does end with no capitulation to the radicals' demands,  removal of the debt ceiling as hostage and ending this cycle of manufactured  governing crises, some will say it was worth it.  They would be wrong.

If the government shutdown ended right this minute --  agencies reopened, bills paid and furloughed employees back to work  permanent damage has already been done to large elements of this countries scientific research programs.  Below are just a select few among the many out there. Feel free to add yours in the comments, if you want:

The U.S. is suspending all Antarctic research programs and initiating "caretaker status" on all its facilities for the year, due to the embargo on funds from the National Science Foundation. The shutdown is having global implications right now, as the United States is a major partner with the 29 other countries who conduct research in the Earth's most remote and hostile environment.  The long term effects will be worse: the Antarctic field season extends from October to February and significant projects - like the Long Term Ecological Research Network, will miss a year's worth of irreplaceable data. Global warming research, Ice core collection and analysis, ozone hole monitoring, astronomical research and Antarctic oceanographic research will all suffer permanent  effects of the U.S. government's ongoing paralysis.

Researchers working with the National Institutes of Health took the latest in a series of hits this week when, due to the furlough of USDA Customs Inspectors, irreplaceable shipments of research Drosophila fruit flies are unable to enter the country. Numerous critical research studies on human diseases are on hold waiting for an ever-diminishing funding stream -- now completely shut down -- from NIH. The long term costs? I think this quote from the linked article says all you need to know:

Princeton University molecular biologist Rebecca Burdine, who also worries that the NIH cuts are delaying treatments for her child with a rare neurological disease called Angelman syndrome, said that “many” of her peers are “circling the drain” waiting in vain to receive NIH funding. “They’re slowing shutting their labs down and they’re leaving science,” she said.

The Centers for Disease Control has stopped monitoring and tracking seasonal influenza cases, for the second week in a row. In addition, the CDC's program to monitor the safety and efficacy of vaccines, the Vaccine Safety Datalink, has gone offline. Now, whatever has been happening with the current influenza outbreak we will not know, any adverse effects of the current vaccination regimes will not be known and research into emerging flu strains to vaccinate against next season is at a standstill The likely long term effects? People will die.

The NIH's specially bred, genetically typed, expensively developed and irreplaceable stock of laboratory research mice may have to be killed if the shutdown continues. If stocks are cut back to a bare maintenance level, bringing them back online will take several years and cost many thousands of dollars for each strain. Thanks, Congress.

The Environmental Protection Agency has taken even more of a beating in the shutdown, with predictable results for morale. EPA activities from air and water monitoring programs, Superfund cleanup, industrial permitting inspections and evaluation of the recent Colorado flooding oil and fracking fluid spills are at a standstill. Regardless of the belief among conservatives that no one needs the EPA, this shutdown will have long term economic effects, due to the stalled permitting process. The utter lack of a functional EPA will have environmental effects that we can't determine yet and human health effects we may never know. It's a safe bet that none of these effects will be good ones, though.

There's quite the international furor going on right now about NASA's decision to ban Chinese scientists and students from the second Kepler Science Conference on Exoplanets, taking place at California's Ames Research Center in early November. The ban originated from language added to a 2011 bill by Congressman Frank Wolf (R-VA), which bans NASA funds from being "used to effectuate the hosting of official Chinese visitors at facilities belonging to or utilized by NASA," and exacerbated by a security leak from a U.S. based Chinese scientist earlier this year. In spite of Frank Wolf's office attempting damage control and U. S. scientists organizing a boycott, progress towards fixing the problem is slow. Why? Most of the people able to solve the problem are furloughed. It's illegal for furloughed Federal employees to even read work-related emails, just so you know. NASA Administrator Charles Bolden has had to attempt a fix all by himself, but this is yet another embarrassing example of a Federal government in disarray.

There are many more impacts to our intellectual infrastructure out there -- far more. The National Oceanic and Atmospheric Agency is closed. The nation's nuclear research labs have closed. These are just the few I was able to collect until I couldn't take it any more.

In spite of all this chaos and uncertainty going on in U.S. research, scientific progress does manage to proceed. At left is the very first image of the covalent hydrogen bond, using a process called atomic force microscopy (AFM). Non-furloughed researchers at China's National Centre for Nanoscience and Technology accomplished this, because their country has no ideological problems with funding basic research.

How's Second Place feel, America? Better get used to it.

Speaker-to-Animals Boehner said this week that "No one wants to shut down the government." That's not at all true. Texas Senator Ted Cruz and this list of 32 members of the House Republican Caucus planned, arranged the shutdown by attaching extortionate conditions on must-pass economic bills and are actively working to prolong it. They must be thrilled at the destruction they've wrought. Anyone who hates, fears and misunderstands the public seeking of knowledge as at least one of them has statedwould be thrilled. Many of them are reinforcing their anti-intellectual bona fides at the Value Voters Summit, where they will tell a similarly radicalized and informationally-isolated audience exactly what it wants to hear. And vice versa.

All great societies value knowledge and devote resources to the people and organizations who are best able to pursue it. What kind of country refuses to fund scientific research? What kind of a people are we if we decide there's things we simply don't want to know? I don't believe this way and I am sure that most Americans don't believe this way. America's scientists, its agencies, institutions and accomplishments fill me with pride, not fear and anger.

We have all been held hostage for far too long by a small group of coddled ideologues that have taken the best that the advanced technological society the U.S. and its scientists have built over the past 50 years and given little if anything back. The Tea Partiers and their wealthy enablers alike are the ones first in line to take the tangible benefits of the hard work the intellectual creators of our society provide. They're also the first ones to balk at paying for them.

John Boehner, you can stop this crisis right now by bringing a clean Continuing Resolution and Debt Limit bill to the floor of the house of Representatives and allowing a vote. You should do so, working with what moderates are left in your party and the Democrats. Stop letting a tiny band of radicals dictate the course of the nation and lead.

We are all tired of the ideologues in your party creating huge deficit hammers and using them to destroy anything in society that doesn't fit their ideology. Responsible legislators do not do that. Anarchist vandals do. Americans deserve better representation. Americans deserve informed and competent representatives.

Put simply, we have had enough. The actual productive members of American society are finished with carrying you and demand that you allow the country to get back to work. We have wasted far too much time.

Professor Peter Higgs, who doesn't own a cell phone and is famously averse to publicity, was so out of touch that he didn't know that he won a Nobel prize until a stranger congratulated him.

The Republicans have tried, but nothing can dampen the joy of Cephalopod Awareness Days!

Of course, you know what comes next. The Cephalopod Video of the Day:

Cheers, All. I'm going to Drunk Dial Congress until I fall over and no doubt vomit on myself. It's been that kind of week.