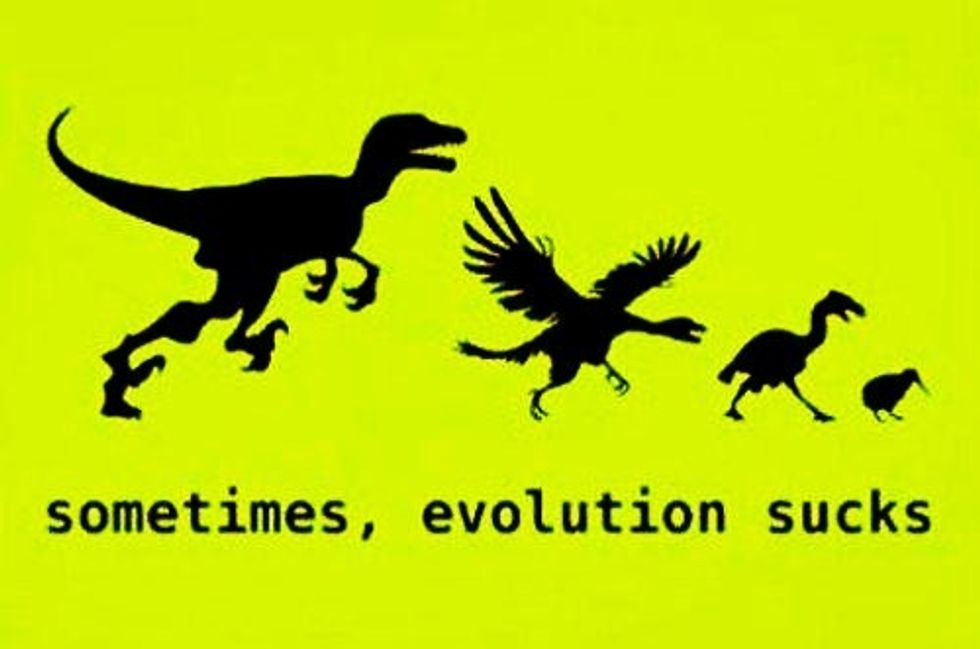 Nice try, but no cigar, lovers of science in the Pelican State. For the fourth time since the Doublespeaky"Louisiana Science Education Act" (LSEA) was passed in 2008, an attempt to repeal the law has been shot down, by a 3-1 vote in the Senate Education Committee. This means that teachers in the Great State of Jindalia can continue to teach "critical thinking" by supplementing the state's official science curriculum with additional materials of their choice, which (nudge-nudge) may "help students understand, analyze, critique, and review scientific theories in an objective manner." In other words, they can "teach the controversy" and drag in materials that say evolution and climate change are just crazy ideas that shouldn't be taken seriously. What a nice victory for academic freedom, which should always include the freedom to not teach facts.

The repeal attempt, introduced by state Sen. Karen Carter Peterson, would have oppressed teachers and students alike by forcing science teachers to teach actual science, but now Louisiana teachers remain free to pull in fascinating if unofficial articles from creationist websites. After all, what good is a curriculum based on mere reality if you're not allowed to undermine it? The LSEA allegedly encourages the development of

critical thinking skills, logical analysis, and open and objective discussion of scientific theories being studied including, but not limited to, evolution, the origins of life, global warming, and human cloning

because these four topics are so very controversial -- not so much among scientists, but among parents.

You know, just as long as the best facts are taught. Never mind that the best facts are that creationism and intelligent design aren't science at all -- different people have a whole lot of beliefs about what a fact is, and by golly, we sure look forward to the inclusion of the Navajo creation story in the Louisiana schools, too, because Coyote is a far more interesting character than those boring "Adam and Eve" people.

Activist young person Zack Kopplin, 20, who's been fighting to repeal the LSEA since it passed, wasn't expecting to win today, but said Wednesday that he's hopeful that after the 2015 state elections, a new crop of legislators may be more open to the nutty idea that science classes should teach science.

“Whether we pass or fail tomorrow, it does not really matter because this is sort of ground zero for a much larger fight for science in this country.”

Or maybe it's time to just cut our losses, declare the Bible the only book that Louisianans need to read (with an option for Atlas Shrugged as extra credit, and just close the schools. Blue states could start a scholarship fund for families with kids who want to learn about reality, maybe.

Follow Doktor Zoom on Twitter. Some days, he wonders if "all the time" is too early to start drinking.