ACLU Tells ICE To Knock Off The Nazi Shit 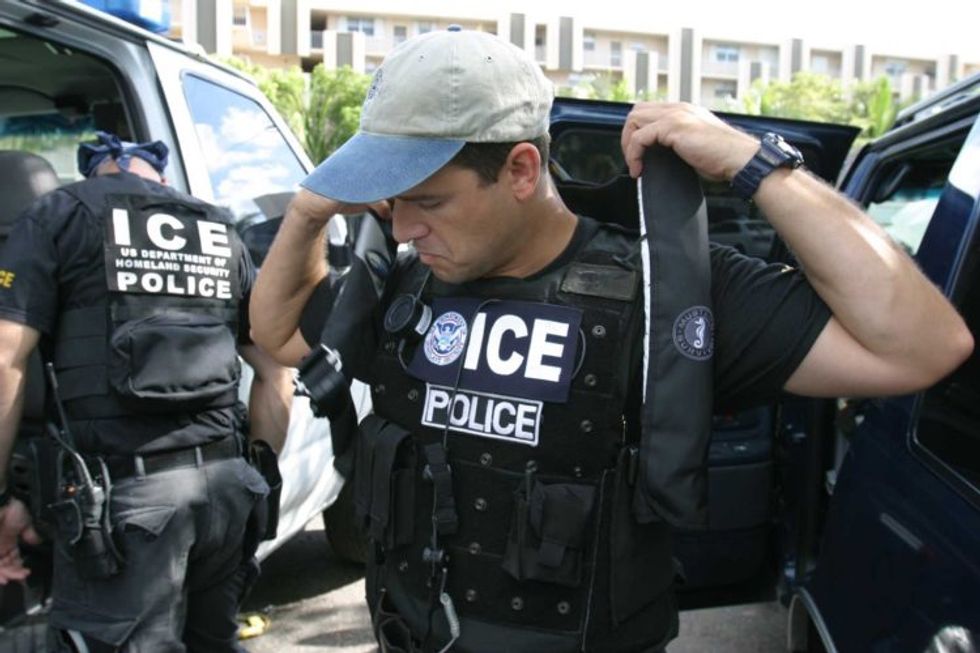 Last week we brought you yet another twist of the New Cruelty, the story of "Ms. L," who, along with her seven-year-old daughter, had fled violence in the Democratic Republic of Congo and sought asylum here in the USA, land of the free, where we have a statue that brags about our country being the Mother of Exiles. Except Ms. L missed the memo on how we don't do kindness or mercy anymore: Instead of welcoming the tempest-toss'd newcomers, Immigration and Customs Enforcement imprisoned the two, and took Ms. L's daughter away from her, sending the girl to a detention center near Chicago, while Ms. L is detained near San Diego, where she had presented herself to authorities at the border crossing from Mexico. Here's part of what happened, according to the ACLU, which has taken Ms. L's case:

And there have been some developments! On Friday, ACLU lawyers requested a preliminary injunction asking a federal judge to reunite Ms. L and her daughter and release them on bond while their asylum claim is processed. The ACLU argues that since the initial asylum screening found that Ms. L had a "credible fear" of death or harm if she returns to the Congo, they should, at the very, very, VERY FUCKING LEAST (if they can't be released because "reasons"), be held together in a family detention facility.

For Christmas, Trump Gives Refugee Parents A Break From Their Tiny Babies -- For Months Even!

Amazingly, the bar for Trump administration ideas can probably go even lower.

The ACLU and other advocates for immigrants argue that the Trump administration is systematically separating children from their parents as part of a policy to discourage immigrants from coming to the US -- even those with well-founded asylum claims. It's been John Kelly's wet dream from when he was head of Homeland Security, because after all, immigrants aren't really human like us, are they, so it's fine to keep a mother and her daughter 2,000 miles apart for the sake of scaring other families from even trying.

details a U.S. Supreme Court case ruling that said: “Aliens, even aliens whose presence in this country is unlawful, have long been recognized as ‘persons’ guaranteed due process of law by the Fifth and Fourteenth Amendments.”

The filing also notes: “The Supreme Court has long recognized family integrity to be one of the most fundamental liberty interests that the Constitution protects.”

Someone may need to explain to Mr. Huppke -- and to the editorial board of the Washington Post... and to us, for that matter -- that under the New Cruelty, "family integrity" is just another way of saying "chain migration," and now that Melania's parents have been taken care of, America doesn't go for that anymore. Then maybe some 4-chan trolls can harass his kids.

In another potentially encouraging development, both US senators from Illinois, where the daughter is being held, have written a letter to DHS Secretary Kirstjen Nielsen demanding action. Huppke obtained a copy of the letter from Tammy Duckworth and Dick Durbin, which reads in part:

We are deeply concerned by allegations that the Department of Homeland Security (DHS) has forcibly and unlawfully separated a seven-year-old girl and her mother from the Democratic Republic of Congo who presented themselves at our border and sought protection in accordance with the law. If these reports are accurate, we urge you to immediately reunite this child with her mother.

In addition to specific queries about the case of Ms. L, Duckworth and Durbin demand that Nielsen provide details on the "number of children of asylum-seekers DHS has separated from a parent since President Trump took office." They want a reply no later than this Friday, March 9. The letter closes,

While we may have different views on many immigration policies, we hope you will agree that it is cruel and inhumane to separate a parent from her child and immediately bring a stop to this practice.

Yr Wonkette would like to think most Americans would agree with that, but the particular group of sadists running immigration policy under Trump doesn't strike us as capable of seeing why that might be a bad thing. Especially if it puts the fear of God into the heathen masses trying to make America less white.

Beyond the national ACLU's involvement in trying to reunite Ms. L with her daughter, the New York Civil Liberties Union announced last month that it would pursue a class-action lawsuit against the Office of Refugee Resettlement (ORR), which oversees minors in immigration detention, to challenge ORR's long-term detention of minors. The lead plaintiff in the case is a 17-year-old identified only as "LVM," a Long Island teen accused on the basis of very flimsy evidence of belonging to MS-13:

LVM, who has no criminal record and no gang involvement, has been detained and separated from his mother for over seven months, though an immigration judge, local ORR supervisor, and every caretaker in the facilities where he is housed have concluded that he poses no danger. The NYCLU believes that more than 40 children would qualify as part of the class of immigrant teens detained indefinitely.

LVM and his mother came to the US from El Salvador; they too are seeking asylum and their case is working its way through the system. LVM was among dozens of teenagers swept up by ICE on the basis of high school reports of immigrant kids supposedly wearing clothes or displaying other signs of being affiliated with MS-13. The "gang signs" allegedly thrown by LVM? He flipped off a classmate with both hands. Yep, a double bird is now a gang sign. Guess that makes half the angry drivers in the country suspects.

An aside, if you don't mind: If your blood pressure is up to it, check out the recent PBS Frontline documentary "The Gang Crackdown," which vividly illustrates how ICE and local police are responding to the MS-13 problem by scooping up lots and lots of young people who aren't actually affiliated with the gang, and trying to send them back to El Salvador. Where they may be killed -- or to survive, may be forced to join MS-13, thus expanding the gang. One of the kids scooped up by ICE in the film is released back to his dad, after another ACLU class action suit in California.

To return to the NYCLU case, it gets even stupider:

In ORR materials cited in the NYCLU lawsuit, the agency later vaguely accused LVM of wearing “gang apparel” and having “gang tattoos.” LVM has no tattoos whatsoever.

But he has to have tattoos! The file says he does, after all, and our brave boys in ICE wouldn't make something like that up. The class action suit calls for underaged detainees who have been determined not to have broken the law and who pose no flight risk to be released to their parents. LVM was initially sent off to a secure facility in Virginia, because scary MS-13 murderer and/or bird flipper, but the staff there didn't want him taking up cell space that should be used for really bad hombres, so they sent him back to New York, where he remains in a juvenile ORR lockup. A judge ruled in December that LVM wasn't a flight risk or a danger to others, but he's still being detained. Yes, at a cost of god knows how much to the US taxpayer. LVM and many kids like him aren't criminals; since their asylum claims are in process, they aren't even here illegally.

But it's very, very useful for ICE to be scaring immigrant communities as much as possible, and to make Trump supporters think thousands of Bad Dudes are being sent away.

Hooray for America. We are so fucking great again.

Yr Wonkette is powered by reader donations and pure, white-hot rage. Please click here to help us convert some of the writing into text.