Adam Schiff Would Like Intel Chair Devin Nunes To Fuck Off From Trump Investigation, Please And Fuck You 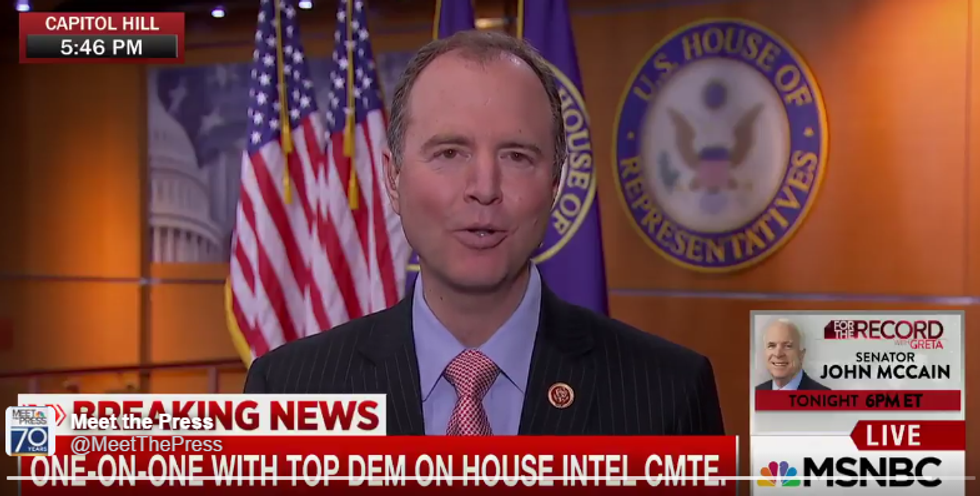 Uh oh, are Devin Nunes's dumb days as the dumb chair of the House Intelligence Committee over? Probably not, but his counterpart on the committee, Democratic ranking member Adam Schiff, has officially had it with Nunes running to the White House with a dead mouse in his mouth and a fresh turd in his hand every time he finds something (ANYTHING!) that might distract from the investigation into whether his big daddy Donald Trump or Trump's inner circle might have done a wee spot of high treason with Russia's help.

Schiff waited as long as he could, we imagine, but he's officially calling for Nunes to recuse himself from the Russia investigation, like yesterday. Here, have a statement:

Do we need to transcribe that whole thing? Nah, you lose, don't feel like it. Basically it says that because Nunes is meeting his sources at the White House in the dead of night wearing a platinum blonde wig and no panties, allegedly, and then refusing to share his "secret information" with any of the members of his own intelligence committee, then for the public to be able to have faith in the investigation, Nunes needs to recuse himself, just like Attorney General Jeff Sessions did, after it was revealed he lied about meeting with the Russian ambassador. (We don't know whether Jeff Sessions was wearing panties when he had those meetings, but now you're thinking about it, HAHA.)

But Schiff is not the only one, oh no siree. Once he released his statement Monday night, the floodgates started to open. House Minority Leader Nancy Pelosi has called for Nunes to GTFO, as have Reps. Joaquin Castro, Jackie Speier and Jim Himes, all members of the House Intelligence Committee. Pelosi gave a statement to CNN on Monday that said, in part, that "Chairman Nunes' discredited behavior has tarnished that office. (House) Speaker (Paul) Ryan must insist that Chairman Nunes at least recuse himself from the Trump-Russia investigation immediately. That leadership is long overdue."

Now, you are probably LOLing because Pelosi used "Paul Ryan" and "leadership" in the same paragraph, so you will not be surprised that Ryan, giant pussy that he is, issued a statement through his spokeslady AshLee Strong that he has "full confidence that Chairman Nunes is conducting a thorough, fair, and credible investigation." Nunes, of course, is ignoring the Democrats' calls, because he, as a former member of the Trump transition team, does not love America.

But maybe Devin Nunes might listen to his fellow Republicans, assuming of course that he isn't so compromised by Trump and Russia as to render that impossible. Here's Senator John McCain Tuesday on "CBS This Morning," saying Nunes has SOME SPLAINING to do, and also that he definitely needs to reveal his mysterious source on the White House grounds, the one who gives him Snausages and shows him top secret info about all the "wire tapps" the mean intelligence community did to innocent Donald Trump. He did not call for outright recusal, though:

John McCain on Devin Nunes: "I've been around for quite a while and I've never heard of any such thing." pic.twitter.com/scaVnpVu21