Adorable Senate Prepares To Pretend To 'Do Something' About Guns, Isn't That Sweet? 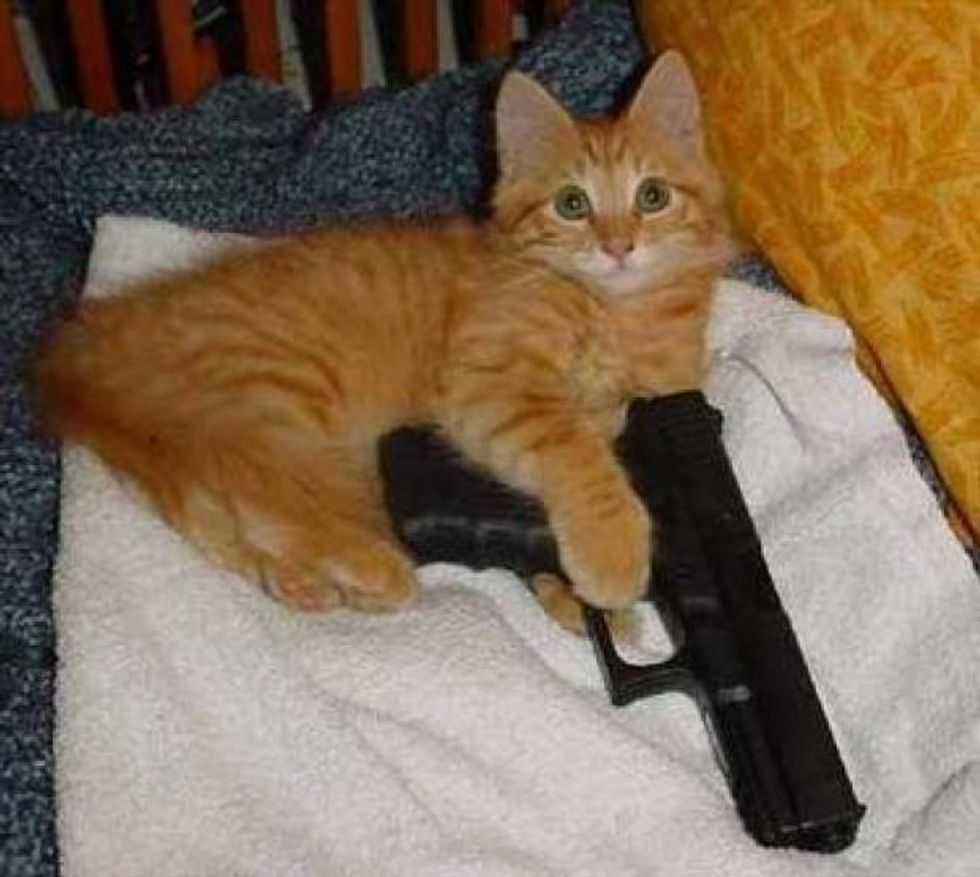 Is everybody ready for the Senate's Great Big Vote on Guns, for which Senate Democrats had to stage a 15-hour filibuster last week? Not to pass actual legislation, mind you, but to get a vote on proposals to close the gun show loophole in background checks (an effort thwarted by the NRA ever since the Columbine massacre) and to ban gun sales to those on the federal no-fly list. Not that Republicans will allow either bill to pass; they're offering their own, NRA-Approved bills that will do pretty much nothing. So this way, everyone gets to make a campaign ad, at least.

So, here are the proposals, not one of which has a chance of getting the 60 votes needed to move on to become actual legislation (which would then be ignored in the House of Representatives anyway). As futile gestures go, they're roughly equivalent to holding your hand in front of you when someone's coming at you with an AR-15:

Sen. Chris Murphy (D-Connecticut) is sponsoring a measure that would mandate the same background checks currently used at firearms shops also be applied to firearms sold at gun shows and on the interwebs. It would also improve the National Criminal Instant Background Check System (NICS) by requiring federal agencies to

certify that they have submitted to NICS all records identifying individuals prohibited from buying a gun and would impose penalties on states that do not make data electronically available to the background check system.

Murphy's amendment is pretty much the same bill that Republicans (and some scaredy-assed Dems) shot as dead as a first-grader a mere four months after Sandy Hook. And then gunned down like some bureaucrat at a Christmas party after San Bernardino.

Oh, sorry, shouldn't use insensitive analogies, although if we as a nation don't give a flying fuck about the actual victims of shootings, it's hard to say why.

Or maybe you'd prefer the GOP "alternative" sponsored by Iowa's Chuck Grassley, which would kind of sort of maybe make the NICS a little better through providing additional funding to the system and giving states "incentives to share mental health records." It would also ask the directors of the National Institutes of Justice and National Academy of Sciences to please commission a joint study on the causes of mass shootings. Oh, and background checks for guns sold at gun shows and online? Nahh. Those are tyrannical. Let the free market work it out. Like Eric Harris and Dylan Klebold did: they asked a friend to buy them some guns at a gun show. You might think the original horrifying example of mass killers bypassing the NICS might have resulted in the closing of the loophole, but you don't know how freedom and lobbying work.

How about the proposals to stop people with potential terrorist connections from buying guns? There are two of those, too! This time, let's start with the Republican proposal put forward by John Cornyn of Texas. It's super-tough! Not on potential terrorists, but on anyone who might try to stop a gun sale:

The Cornyn amendment allows the Attorney General to delay a purchase of a gun for up to 72-hours for a suspected terrorist or an individual investigated for terrorism in the last five years and also seek a court order to prevent the sale. Republican aides believe the amendment keeps in place more protections for gun owners.

So maybe, if the Attorney General of the United States has far more concrete evidence of a terrorist connection than is currently needed to stop someone from getting aboard an airplane, it might be possible to prevent a gun sale, or at least slow it for a while. Unless of course our suspected terrorist goes to a gun show. We can see why the NRA supports this perfectly reasonable set of limits on the gun grabbers. We haven't read the text of Cornyn's amendment, but wouldn't be surprised if it also includes, as a bargaining chip, restrictions on sales of firearms to unicorns, banshees, and velociraptors.

prevents any individual on a terrorist watch list from buying a gun. The Attorney General would have the ability to block an individual from buying a weapon if there was "reasonable belief" the individual could use the weapon for terrorism -- even if the person is not on the watch list. Following suggestions by the Justice Department, the amendment allows gun sales to go through when blocking a sale could compromise a major terrorism investigation.

Oh, and this one's bipartisan! Mark Kirk -- whose reelection hopes are only slightly less doomed than any congressional action to tighten gun regulation -- is co-sponsoring Feinstein's amendment.

Once again, it's pretty unlikely either will pass. Republicans think the Democratic version will keep guns out of the hands of people with legitimate self-defense needs if they're unfairly placed on a watch list, and Democrats think the Republican proposal sets such a high burden of proof that no one ever will be prevented from acquiring a firearm. Still, maybe some future compromise is possible? Sure!

There may be room for agreement in extending the review period for those once on the watch list who were removed from the list. The Cornyn amendment now includes a provision for an individual who has been investigated for terrorism in the last five years. That provision would have flagged the Orlando killer. [Pennsylvania Sen. Pat] Toomey had an idea for extending the review period to 50 days.

Several senators — including Sen. Susan Collins, R-Maine — are working behind the scenes to forge a compromise with colleagues across the aisle. Work by the Republican senator on a bipartisan compromise proposal continues with a proposal potentially unveiled as early as Monday. Aides are working to strike a balance between the Feinsten and Cornyn language.

Hahaha, no, nothing will change. But as soon as everything's voted down, the votes will at least be on the record, and we'll see once again how many Republicans (and some Democrats) are owned by the NRA, while Democrats can look forward to NRA-sponsored ads claiming they're friendly to terrorists. And the business of the World's Greatest Deliberative Body can continue, while bodies continue to pile up around our gun-obsessed nation, forever and ever, amen.

The voting should begin around 5:30 EDT; watch CSPAN-2 and wear black.