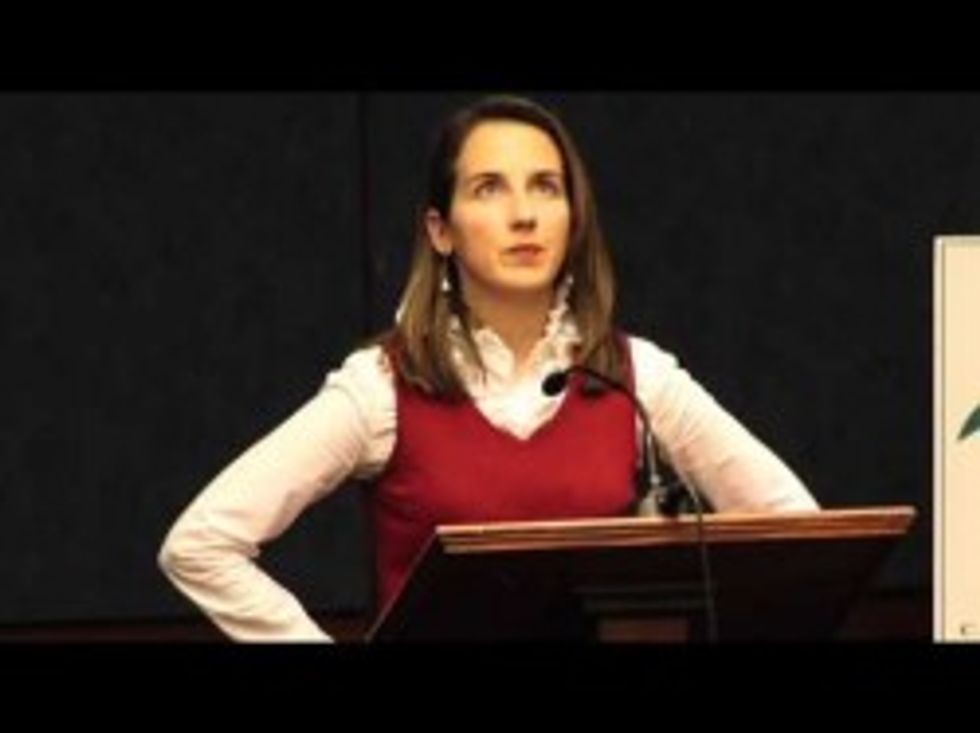 Hey you guys, quick question, it'll only take a minute. Which would you choose,food stamps or the Department of Defense? Because Mackenzie Eaglen, Resident Fellow at the American Enterprise Institute, posed this ethnical dilemma in the headline of her op-ed piece over at the Wall Street Journal, and you’ll NEVER GUESS which one she chooses! Actually, to be fair, you just kind of have to guess which one she chooses because she never outright says it; just strongly IMPLIES it. So guess which one she strongly implies? Are you ready? OK, click "read more!"

It is the poor, sad, unloved, underfunded military, duh. What is wrong with you?

Even before sequestration and the possible loss of a half-trillion dollars, the U.S. military has seen three years of budget cuts. The consequences are already here. We have to look all the way back to 1916 to find a year when the Air Force purchased fewer aircraft than are included in Mr. Obama's 2013 budget request.

Yes, the consequences are here, and they involve over 7,000 unstaffed drones—more than the Pentagon wants or asked for actually -- engaged in overseas operations in Yemen, Pakistan, Libya, Afghanistan, and the Philippines (Yes. There was a drone strike last year in the Philippines.) So we GUESS we could purchase “aircraft” like they did in 1916, OR we could just continue on our current trajectory and purchase state of the art, flying killer death robots unmanned aerial drones.

Then there's the Navy, which is the smallest it has been since 1916. At 286 combat and combat-support ships, the Navy today is less than half the size it reached during the Reagan administration. And what about those men and women who have been fighting America's wars in Afghanistan and Iraq since 2001? They're losing 100,000 in active duty personnel. Surely some will go from the front lines to unemployment lines as a result.

See, this is annoying. The Navy is the "smallest since 1916" BY WHAT MEASURE? In terms of money spent on it, when adjusted for inflation? In terms of personnel? In terms of firepower? In terms of the number of aircraft it has? HOW is it the smallest?? Whatever, we should know better than to look for logic from the op-ed pages of the Wall Street Journal. Oh and we thought the Iraq war was over in 2003 when GW got all gussied up and pranced around in front of a banner that said “Mission Accomplished,” but apparently we were wrong and the war in Iraq is still going on, even though Obama said he’s ending it, which is why 100,000 men and women are returning home. If these men and women can’t find jobs when they get here, should we fire the job creators for failing to create enough jobs for them? Or maybe use some of those domestic programs the GOP wants to cut? Or just let them fend for themselves in the free market, because this is America?

As the largest employer in America, the Department of Defense should not be off the hook for belt-tightening. Everyone loves to hate the Pentagon's broken acquisition system, for good reason. The emphasis on contractors often masks the government's contribution to spiraling costs and schedule delays. And this takes the pressure off leaders to change the way the Pentagon buys not weapons but services. Of the roughly $400 billion the military spends on goods, services, information technology and commodities each year, more than half goes to services. A reformed process would emphasize competition, reduce congressional regulations, restore the authority of service secretaries, and accelerate programs for completion in seven years or fewer…

In testimony before Congress recently, White House budget director Jeffrey Zients suggested that Congress is to blame for defense cuts. But no Republican occupies the seat of commander in chief. Mr. Obama does, and having pledged repeatedly to slice defense, he has done so arbitrarily and without an overarching strategy—before Congress ever got involved. And only Mr. Obama can broker a budget compromise. The military cannot be immune from reform, but it should at least be immune from attack.

Hey, Mackenzie? The Commander in Chief doesn’t control the purse strings, Congress does. The founders set it up that way to make sure there are checks and balances on the power of each branch of government, so yeah, Congress is ultimately to blame (or at least shares a huge portion of the blame) for defense cuts. Also, Wonkette readers, do you ever wonder if you could get published in the pages of the Wall Street Journal? The good news is that you probably can, iffen you’re willing to assert a bunch of “facts” absent any citations or sources for these “facts,” compare objects or institutions without stating the bases of your comparisons, and then make vague recommendations based on the conclusions drawn from these “facts” and comparisons.