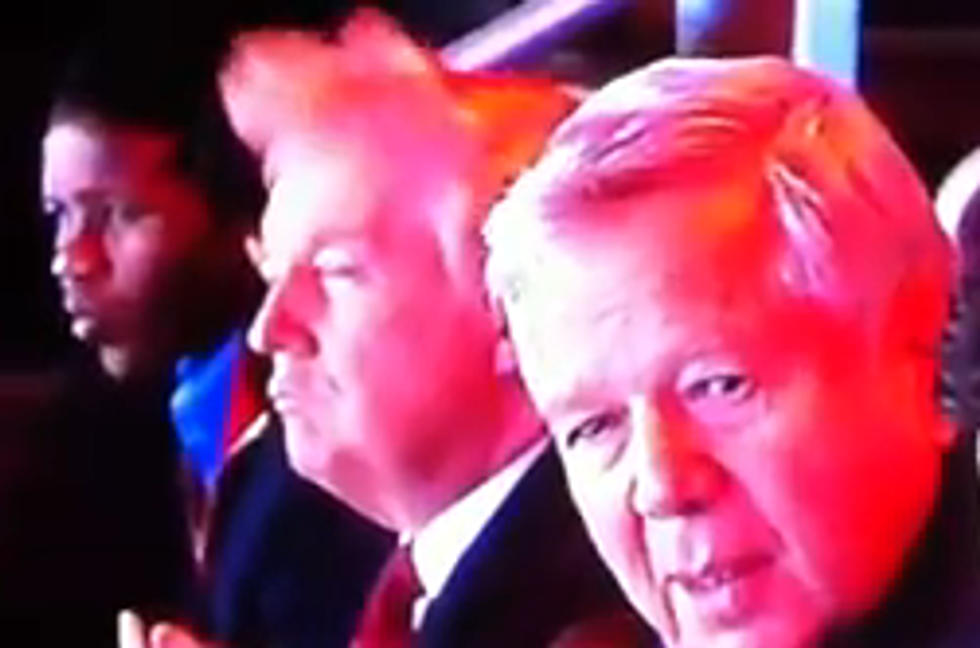 It's been a tough few weeks for Donald Trump since the president up and released his birth certificate. America has a funny way of showing its gratitude to him for "getting the birth certificate": he took a nosedive in the Republican presidential polls. Donald Trump was no longer able to figure out a way to insert himself into the daily news cycle. And today came the final indignity for the fake-wealthiest fake-man in the world: NBCsaid it didn't need him to host Celebrity Apprentice, and the show would go for its next season without him if he ran for office. It was an admission that Americans don't really care about him from somebody to whom Trump has to listen. And finally, the whole charade has ended with Trump's release of the most patently false statement in press history.

Here's the full thing. Laugh along at all the amazing "facts" the cartoon rich man throws at you:

After considerable deliberation and reflection, I have decided not to pursue the office of the Presidency. This decision does not come easily or without regret; especially when my potential candidacy continues to be validated by ranking at the top of the Republican contenders in polls across the country. I maintain the strong conviction that if I were to run, I would be able to win the primary and ultimately, the general election. I have spent the past several months unofficially campaigning and recognize that running for public office cannot be done half heartedly. Ultimately, however, business is my greatest passion and I am not ready to leave the private sector.

I want to personally thank the millions of Americans who have joined the various Trump grassroots movements and written me letters and e-mails encouraging me to run. My gratitude for your faith and trust in me could never be expressed properly in words. So, I make you this promise: that I will continue to voice my opinions loudly and help to shape our politician’s thoughts. My ability to bring important economic and foreign policy issues to the forefront of the national dialogue is perhaps my greatest asset and one of the most valuable services I can provide to this country. I will continue to push our President and the country’s policy makers to address the dire challenges arising from our unsustainable debt structure and increasing lack of global competitiveness. Issues, including getting tough on China and other countries that are methodically and systematically taking advantage of the United States, were seldom mentioned before I brought them to the forefront of the country’s conversation. They are now being debated vigorously. I will also continue to push for job creation, an initiative that should be this country’s top priority and something that I know a lot about. I will not shy away from expressing the opinions that so many of you share yet don’t have a medium through which to articulate.

I look forward to supporting the candidate who is the most qualified to help us tackle our country’s most important issues and am hopeful that, when this person emerges, he or she will have the courage to take on the challenges of the Office and be the agent of change that this country so desperately needs

Thank you and God Bless America!

Yes, that is one way of looking at it.

If Donald Trump was rich enough, or people cared about him, he would obviously have his own teevee network devoted to propagating his image. Instead, he quakes before the executives of the last-place channel replacing him on a fake game show.

Still, if he actually gotten into the race, he would have had one hell of a spectacular implosion. The prospect of witnessing that was pretty much the only thing keeping the world from ending on Saturday. Now it won't.

(It looks like your editor was three days off on predicting when Trump would drop out of his fake thing.) [ABC News]