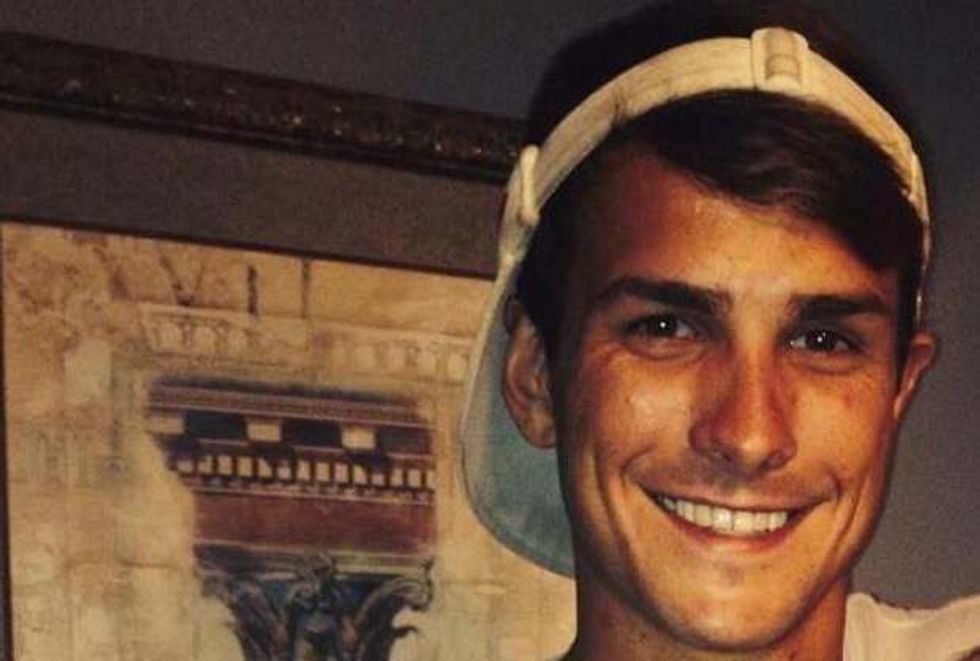 It's very difficult these days, managing a career devoted to mangling the lives of LGBT people you've never met, and also raising your own children. Alabama Supreme Court Chief Justice Roy Moore knows this struggle well, as he seems to have a rabid dick-child who probably needs to be rehomed with nature. The child's name is Caleb, and he is probably wasted right now, as he was when he got arrested again for being a ne'er-do-well:

The son of Alabama Chief Justice Roy Moore was arrested Sunday for drug possession near the scene of an attempted break-in, court records show.

According to court documents, officers responded to the 1200 block of Allen Street in Troy to a report of an attempted home break-in. They found five men, including Moore, outside near a pickup truck that smelled strongly of marijuana.

After the men said there were no drugs in the vehicle, officers searched the truck and found a bag of marijuana in the glove compartment, along with Moore's passport. Several Xanax pills also were found in the bag.

Usually, we at the Wonkette would say, "hey, lots of people have trouble with their kids," and leave this alone. And meh, weed and a couple of Xanax, probably not such a big deal, we like weed sometimes, and the Xanax is PROBABLY for his anxiety about his dad being a dick. (Ha ha, no it isn't.) But it seems that wee Caleb attributes his own fuck-ups to the same victim mentality that rules his father's life:

"This is nothing more than a prime example of how media and crooked police officers and critics of my dad try to not only destroy his career for what he stands for but will go as far as trying to destroy his family," he wrote. "I am not a drug user as the drug test taken today will show. As for the malicious possession charges, justice will be served."

Malicious! If the glove don't fit, you must acquit! The drugs aren't Caleb's, he was holding them for every gay and lesbian in the state of Alabama, and also the bisexuals, the ones his hero Daddy thinks are gettin' fired up to marry multiple people at a time. They are the REAL perpetrators here!

To be fair to the youngster Caleb, it's probably tough to carry on in life when your dad is ALSO such a raging fuck-up. If our dad was devoted to standing in the courthouse door to prevent gays from having basic civil rights, and also was a national laughingstock, we'd probably turn to drugs too, although we wouldn't be stupid enough to get arrested for it, but, you know, he's "Roy Moore's Son." Some of us are born with more advantages than others. This is what the liberal parts of Twitter call "privilege," not being Roy Moore's child.

Of course, this isn't some little isolated mistake. Wee Caleb seems to be perpetually wasted and in trouble with the law. This is his THIRD drug arrest, following incidents in 2011 and 2013:

Court records show that, in 2013, Moore pleaded guilty to drug-related charges in St. Clair County and was sentenced to probation. In 2011, he was arrested and charged with drug possession and driving under the influence in Etowah County. He applied to be treated as a youthful offender.

Poor Caleb explained in January that this is all a set-up, including when he got in trouble for saying naughty things on the internet:

"Being young and immature, I did post pictures of me with drinks in the background," he said. "I started to mature and realized those pictures were immature. I've done nothing more than any other college kids. Because of who I am, it gets blown out of proportion. Since then I've got in a closer walk with the Lord. Whatever anyone says about me, it doesn't bother me. The people who know me and know what's true can really see what's going on here and see through critics of my dad."

Because of WHO HE IS. Caleb Moore and Justin Bieber, just having to constantly monitor the internet for what kind of pictures people put up, because CELEBRITY. And he's in a closer walk with the Lord now, or at least was in January when people were being mean. He and the Lord are tight, bro, the drugs the cops found weren't even his, they belonged to JESUS. Sadly, it appears that Jesus dumped him like a common whore, May-December romances never work out.

Because real things got spliced with manufactured things, "It's really hard to specify what is real and what's not," Moore said. "There are several things on there I never said, and maybe one or two things I did. There are some things that are not even on my account. There are things I never said. There's one thing about me going to Montgomery and getting money from my dad. I never said that. I can't say all of it's a lie. There are things on there I haven't said. Someone posted a picture of someone I don't even know."

Moore said he's always experienced fallout because of his famous father, who came to prominence as "The Ten Commandments" judge, fighting efforts to remove his hand-made wooden Ten Commandments plaques from his Etowah County courtroom. "I've really dealt with it most of my life," Caleb Moore said. "Most people would get upset and retaliate. I guess some people take it seriously. I really don't. I know in my heart who I am. I could really care less what these critics of my dad say."

It is such trouble, having to constantly live in the shadow of Roy Moore. It must be like if your dad was Gandhi. How can you ever measure up?

Ha ha ha, Caleb, you and your daddy are both horrible losers. The only difference between you two is that your dad will end up being an embarrassing footnote (not even a proper paragraph) in history books. You probably won't even make it that far, dear Caleb. The only way you could truly rebel at this point is by becoming a successful, thoughtful, intelligent human being, and the forecast on that possibility is very, very cloudy.