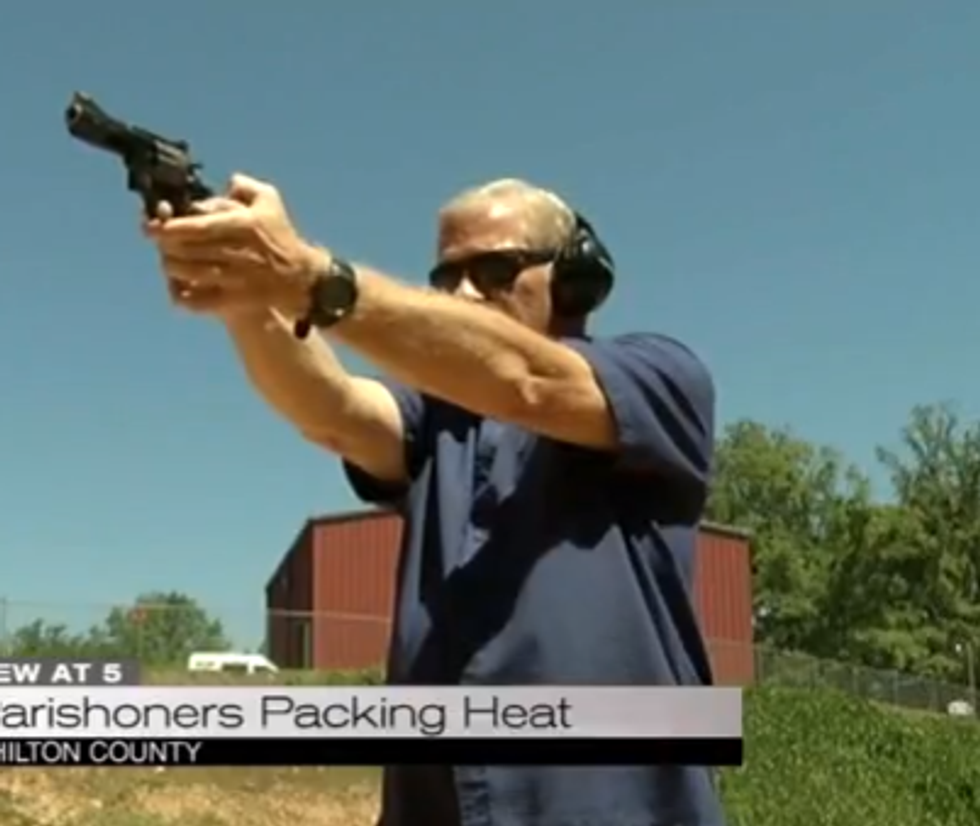 Are you a little old lady who lives round about Chilton County, Alabama, who got a gun for your 90th birthday, because your crazy grandkids never can figure out what to buy for Mee-Maw? Last Christmas it was one-a-them newfangly "mePhones" or whatever they're called, and now a murder weapon for hunting squirrels? Oh well, better learn how to use it. And wouldn't you know it, there's a church for that! It's called the Rocky Mount United Methodist Church in Jemison, Alabama, and it has a gun range "ministry" in a ditch behind the church, because the serenity of a gun range is a good place to get intimate with Our Lord:

Pastor Phillip Guin says the gully, once full of kudzu, snakes and other vermin, had been there since before he arrived at the church. [...]

“We had quite a number of church members, some elderly ladies, for example, and some not so elderly women that had purchased guns, but didn’t know how to use them,” Guin said.

So they figured, why not, let's clear the snakes outta that ditch back there, and teach the womenfolk how to do their lady guns! And that was supposed to be that, but as the Lord famously said, "Wherever two or three are gathered in My name, just cold Yosemite-Sammin' up some shit, there I will be," and it turned into a ministry before you could say "Pew pew pew, in Jesus' name, AMEN!"

“This is an opportunity for us to reach out in the name of Jesus Christ in a setting that is completely unique. Even odd by some people’s standards. But who’s to say that church can’t happen right here,” Guin said, pointing at the red clay dirt of the range.

Anyway, this is all just very nice, so we thought we'd help them come up with some ideas for targets, maybe the kids could decorate them during Vacation Bible School:

These are just really good ideas, and the Rocky Mount UMC is free to use any of them, as a free gift from yr Wonkette, unless the gun range starts making money, in which case, ALL THE ROYALTIES.