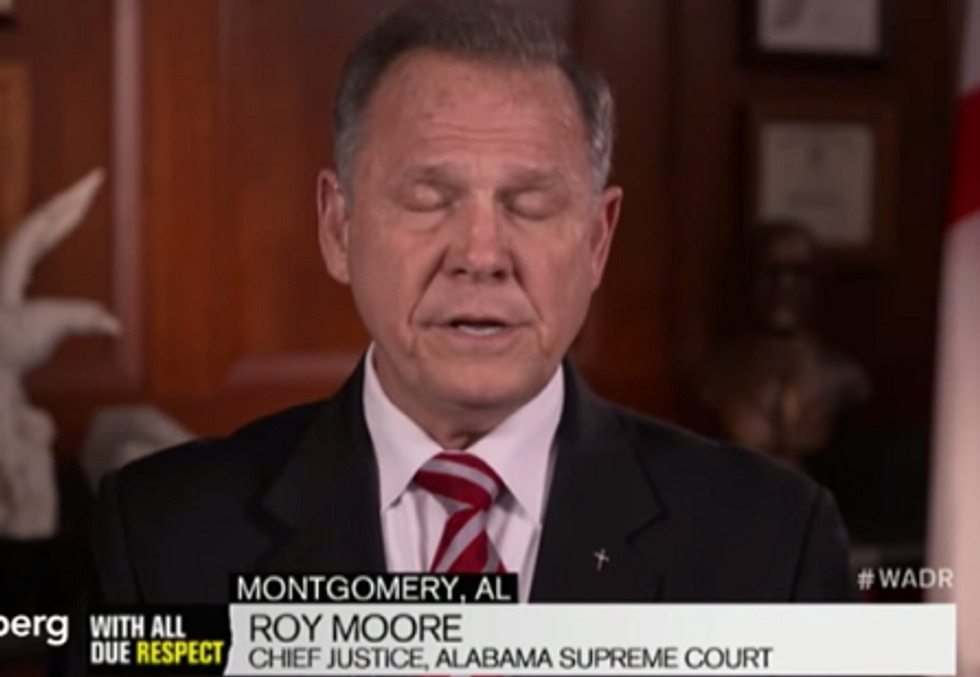 So it is Wednesday, the third day since Alabama was victimized by a gratuitous federal over-reach-around that required the state to allow gay marriage, even in the really wingnut parts. Let's look at the Alabammy gay sexy news that has happened since we last updated you on their tantrums, yesterday, when the great majority of probate judges were simply saying, "don't care about the Constitution, sorry, have you met us?"

Let us get out of the way the Good News. Twenty-two counties today will be giving out the gay marriages, which is more than twice as many as yesterday morning. Clearly some of these people are starting to grasp that Alabama Chief Justice Roy Moore's tantrum is really just that, with nothing to back it up, and are saying, "Oh fine, I won't PERSONALLY bless your wedding, but here is some paperwork!" That is progress! One probate judge remarked that "[w]hether national or not, it now applies to Alabama." Imagine that, federal law applying in the sovereign nation of Alabama!

Also, Callie Granade, the federal judge who first gayed Alabama and started all this rolling in the first place, is holding a hearing Thursday for the purposes of slowly explaining to Mobile County's probate judge, possibly with visual aids, that federal judges trump Roy Moore's tears, and many watchers believe that will send a message to the rest of the state's judges, and that will be that. But remember, this is Alabama. We will have to see.

Onto the bad. We know that the Ku Klux Klan really likes getting mileage out of these sorts of things, so they have issued a call to arms or something because they hate gays almost as much as Roy Moore does, but they said "no hoods this time, pretend you're one of the Normals." And that is all we are going to say about that, sorry, you attention-starved dweebs!

Alabama's Autauga County clearly is Not Ready and Needs Some Time to work through their feelings on this -- maybe Judge Granade can organize a group therapy session -- because yesterday, they stomped on the religious freedom of a minister who, very nicely, was trying to perform a same-sex wedding:

After a gay couple received their marriage license from the probate judge's office, Anne Susan Diprizio, who says she is an ordained minister, offered to conduct a marriage ceremony right there.

When the police arrived, they asked Diprizio to leave numerous times and threatened to arrest her, but she refused. She was then arrested and held on a $1,000 bond, according to the Montgomery Advertiser.

Diprizio was later released. She immediately went back to the probate judge's office.

Perhaps she could remind Roy Moore of that as well, or even remind him of his own history, because every hour, he doubles down and steels his resolve to act as weapons-grade stupid as he possibly can about this. Writing Tuesday night in the Montgomery Advertiser, he law-splained that, unlike Alabama chief justices, federal judges are not perfect, and they sometimes do Bad Things. For instance, Dred Scott! Would YOU have obeyed that federal judge in 1857, who said that black people are property? Roy Moore would not have, at least for the purposes of this current argument!

Should state courts have obeyed the 1857 ruling of the Supreme Court in Dred Scott that black people were property? Absolutely not! When federal courts stray beyond the limits of their legitimate authority into realms of public policy, they become tyrants and violate the 10th Amendment.

Tyrants! These two are exactly the same because Dred Scott said people were property, and Judge Granade's decision clearly said that the homosexuals of Alabama are now the rightful owners of all the state's straight Christian wingnuts. Wait, we got that wrong, Roy Moore is a dipshit of impressive proportions.

When asked why he just cold hates gays so much, Moore told Mark Halperin in an interview that HE HAS GAY FRIENDS, all of whom we would love to meet, please e-mail Wonkette as soon as possible, Roy Moore's gay friends:

I've had many friends who are homosexual. I've treated people just like other people. This is not about how I treat people or how I go to a wedding or a marriage or anything. It's about the constitution of Alabama and the constitution of the United States and specifically the sanctity of marriage amendment.

You see, this is not about how he goes to weddings or treats gays or anything. Would he go to one of his many gay friends' weddings?

I would not go to a same-sex wedding.

Oh. If you are in the mood to mainline pure dumbass this morning, enjoy all nine minutes of this interview, wherein he explains that he does not allow gay marriage anywhere, but if (when) the Supreme Court rules for marriage equality (in June), he acknowledges that Alabama will be bound by that, so hurray, there is a TIMELINE on all this hooey, and it is June:

Let's end this update on a high note, shall we? President Obama gave an interview to the Buzzfeed, and says he is happy that the Supreme Court is going to gay everything, including Alabama. Speaking specifically about Moore:

"My recollection is that Judge Moore had a similar problem with a federal court ruling that you couldn’t put a huge Ten Commandments statue in the middle of your courthouse and, ultimately, federal law was obeyed, and I think that the same thing will end up happening here,” Obama said. “I think that the courts at the federal level will have something to say to him.”

President Obama SEEMS TO RECALL, in other words, that Roy Moore has been held accountable for being a silly little lawless wingnut of a judge before, and that it didn't go so well for him. So that's good news, maybe that means the president will call in the National Guard to tyranny Alabama into gay submission, and thirty-three years from now, they'll officially take their anti-gay marriage laws off the books, just like they did with Loving, and then they can get on with the hard work of pretending none of this ever happened, in Jesus's name, amen.