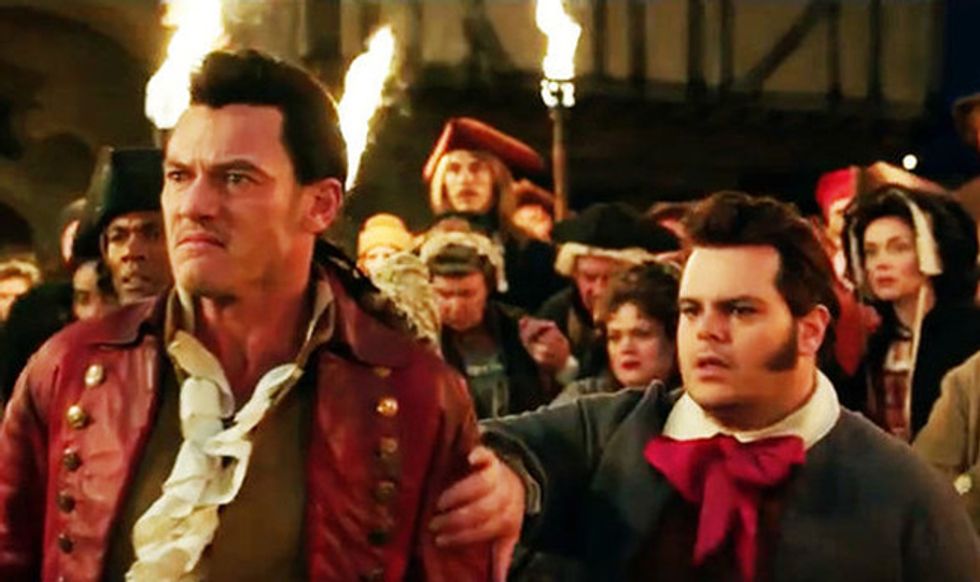 The drive-in-theatergoing families of DeKalb county in Alabama will remain safe from Disney's gay agenda thanks to the courageous actions of some Christian theater owners who have cancelled the run of the new live-action Beauty and the Beast because it has a gay character in it. And no, it's not the stodgy clock guy or the foppish candelabra dude, either, which is the real surprise. Variety has the scoop:

“Josh Gad, incidentally, plays Gaston’s worshipful stooge LeFou as maximally silly and fawning, but I must have missed the memo where that spells ‘gay,'” Variety chief film critic Owen Gleiberman wrote in his review.

As far as we can tell, that makes LeFou one of those characters who's gay like Dumbledore -- if you didn't read online he's gay, then there's nothing overtly gay about him, apart from the whole "character in a musical" thing, although Condon also describes the character in terms that could just as well apply to Waylon Smithers from The Simpsons:

LeFou is somebody who on one day wants to be Gaston and on another day wants to kiss Gaston [...] He’s confused about what he wants. It’s somebody who’s just realizing that he has these feelings. And Josh makes something really subtle and delicious out of it. And that’s what has its payoff at the end, which I don’t want to give away. But it is a nice, exclusively gay moment in a Disney movie.

Apparently that's all the gay the new management of the Henagar Drive-In Theatre, with its fey little frenchy spelling of "theater," could handle; they announced on their Facebook page that they weren't about to bow down to King Rat's gay agenda:

As of December 16th the Henagar Drive-In is under new ownership. Movies scheduled prior to that date and four weeks after this date were not scheduled by the new owners. That being said...It is with great sorrow that I have to tell our customers that we will not be showing Beauty and the Beast at the Henagar Drive-In when it comes out. When companies continually force their views on us we need to take a stand. We all make choices and I am making mine. For those that do not know Beauty and the Beast is "premiering" their first homosexual character. The producer also says at the end of the movie "there will be a surprise for same-sex couples".

Lord have mercy, Martha, they're gonna have butt sechs in a Disney movie! Or a kiss. Or maybe just a sly glance. But probably a whole lot of turgid love muscles, lord save us, not to mention mincing. Not to mention Show Tunes. The theater's owners have plenty more to say:

If we can not take our 11 year old grand daughter and 8 year old grandson to see a movie we have no business watching it. If I can't sit through a movie with God or Jesus sitting by me then we have no business showing it. I know there will be some that do not agree with this decision. That's fine. We are first and foremost Christians. We will not compromise on what the Bible teaches. We will continue to show family oriented films so you can feel free to come watch wholesome movies without worrying about sex, nudity, homosexuality and foul language. Thank you for your support!

We guess we'd never thought of movies that way -- whatever you're watching, it's as if Jesus is sitting right there next to you. And probably talking to you about sin all the way through it, when he's not asking really dumb questions about whether that one guy was in that other movie, the one with the whale and the ditzy fish, that He liked so much. We honestly had no idea Jesus spent so much of His valuable time worrying about what movies people are seeing at the drive-in, which strikes us as a monumental waste of His time when He could be, we dunno, spiriting all the children out of Aleppo? It's a Mystery, is what it is.

Anyway, people are now fighting the Culture Wars in the comments on Facebook, with roughly equal numbers of people who've never been near Alabama giving the theater five-star reviews for Standing Up for God, or one-star reviews for being run by bigots, so that's one way to spend a Friday online.

It's not clear what film will replace Beauty and the Beast, although as fans of Joe Bob Goes to the Drive-In, the very idea of a Drive-In that shows only family-friendly movies has already filled us with dread and cognitive dissonance. Here's hoping the Henagar Drive-In Theatre gets right with the spirit of drive-ins and schedules Chainsaw Cheerleaders III, the way God meant drive-ins to be.

Remember, Yr Wonkette is ad-free, so let's all go to the lobby and throw money at the bloggers. It's way cheaper than a night at the movies!