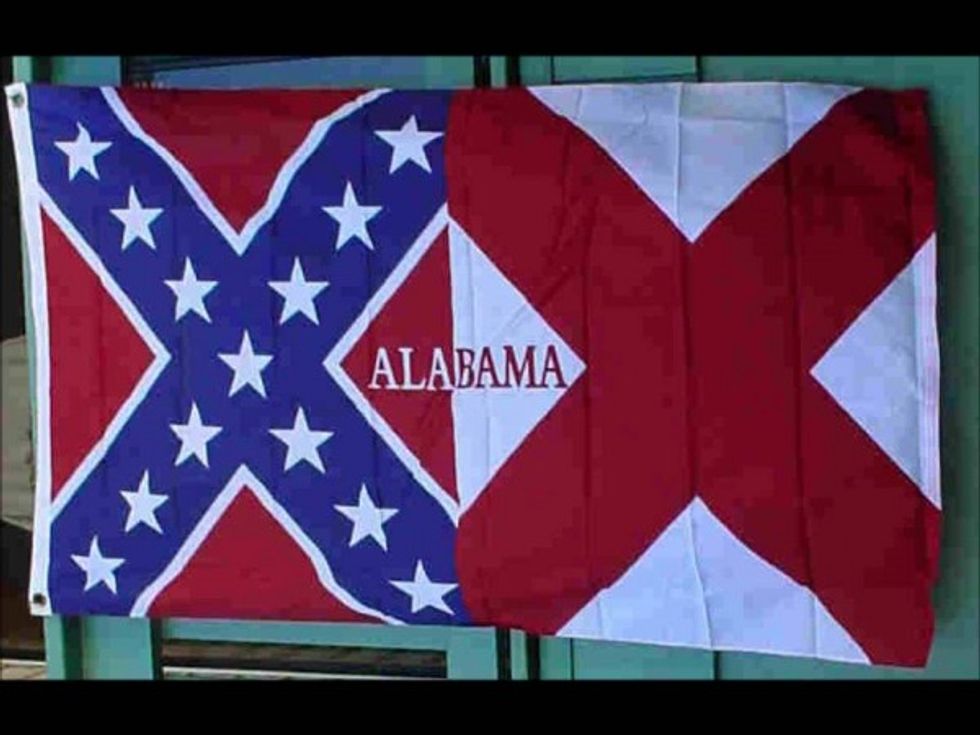 Remember that Supreme Court case Shelby County v. Holder, in which the court decided that America had totally gotten over racism and therefore there was no longer a need for racist states like Alabama and Mississippi and Tennessee and Arkansas and South Carolina (ET CETERA!) to consult with the Justice Department before passing new, racist voting laws? And remember how Alabama's Republican-controlled legislature passed one of the nation's harshest voter ID laws, in order to make it more difficult for poors and blacks to vote? (Yes, we know wingnuts prefer to use the term "voter fraud," one of the most creative euphemisms for "nigger" they've come up with yet!)

And remember how Alabama has ALWAYS had this little problem when it comes to trying to suppress the black vote? Remember when President Obama attended the 50th anniversary of Bloody Sunday in Selma, where civil rights activists fighting for, among other things, the right to vote, were beaten by the police, one of the most violent events to transpire before the Voting Rights Act was passed in 1965?

Take a look at the 10 Alabama counties with the highest percentage of non-white registered voters. That's Macon, Greene, Sumter, Lowndes, Bullock, Perry, Wilcox, Dallas, Hale, and Montgomery, according to the Alabama Secretary of State's office. Alabama, thanks to its budgetary insanity and inanity, just opted to close driver license bureaus in eight of them. All but Dallas and Montgomery will be closed.

Closed. In a state in which driver licenses or special photo IDs are a requirement for voting.

In fact, the Alabama Law Enforcement Agency announced that, thanks to the shitty budget passed by the shitty legislature and signed by the shitty governor, it's closing THIRTY-ONE driver's license offices across the state. But don't say they're doing it for racist reasons, it's just how the state is broke. And that's true! Alabama's one of those mooch states that sucks the blue states' dicks for sweet government cash, then bitches when it can't pay its bills. (Though a local columnist suggests the state is not broke, but rather stupid and lazy. Teach the controversy!)

But so weird how they picked those counties. It's got to be some kind of crazy coincidence that "Every single county in which blacks make up more than 75 percent of registered voters will see their driver license office closed." And that so many of those people are poor. And that it's a lot damn harder for those people to travel to the next county for a license than it is for overgrown rich white fraternity boy Tucker S. Dickinbottom IV, of the Mountain Brook Dickinbottoms, to drive his Land Rover a little further away to get his driver's license renewed.

Nah, not racist at all. As we wonksplained when we covered Obama's speech at Selma, "21 million Americans don't have the ID that voter ID laws require. And maybe it’s an issue because those people are disproportionately poor, minorities, and elderly." AND HOW DO THOSE PEOPLE VOTE? Well, they're sure not voting for Tucker Dickinbottom's daddy, that's for certain.

And to be completely fair, and as John Archibald at AL.com points out, the powers-that-be might not specifically have been thinking, "Hey, what if we did racism and disenfranchisement to The Blacks today?" when they made this decision. As Archibald says, "no matter the intent, the consequence is the same."

The history and the current reputation of the state of Alabammy are so completely marred by racial hatred, discrimination and violence that any elected official in that state should probably be required to TRIPLE-check that every single thing they do, down to taking a shit, is not in some way racist, intentional or not.

And then check the toilet bowl a fourth time, just for certain, and also because a lot of Republicans in Alabama like to take pictures of their turds for their scrapbooks, we are guessing.