Alabama Rep. Saves Schoolkids From Learning They Are Disgusting Monkeys 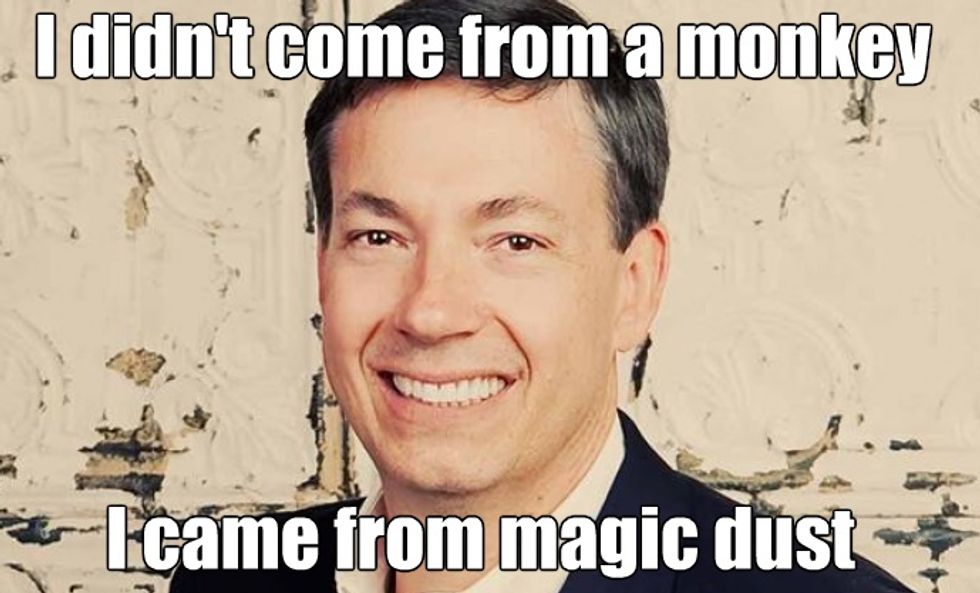 House Bill 592, which is not at all a means of sneaking creationism into the science classroom -- NOT AT ALL, why would you think that? -- is simply asking students and teachers at all grade levels to:

explore scientific questions, learn about scientific evidence, develop critical thinking skills, and respond appropriately and respectfully to differences of opinion about scientific subjects; and to allow teachers to help students understand, analyze, critique, and review the scientific strengths and scientific weaknesses of all existing scientific theories covered in a science course.

See? It uses "science" and "scientific" so much that it obviously is about teaching the best possible science ever, whether it's the "theory of gravity" or the "theory of intelligent falling."

Rep. Butler, who represents Rainbow City, Alabama, which we swear we are not making up, merely wants to accommodate the widest possible range of scientific thinking on scientific subjects, and to be able to celebrate diverse views! The bill notes that some topics in science classes aren't entirely settled just yet, and "may cause debate and disputation" -- really controversial stuff "including, but not limited to biological evolution, the chemical origins of life, and human cloning." By some miracle (or oversight), the list doesn't include climate change as a topic that needs to be questioned by school children, which we'll guess simply means that Mr. Butler isn't getting enough of those sweet fossil fuel industry contributions to make it worth his time to mention, but that's why it's left open-ended.

Also, just to make it absolutely clear the bill is 100 percent good as far as the Establishment clause goes, there's even a provision that the bill "only protects the teaching of scientific information, and shall not be construed to promote any religious doctrine, promote discrimination for or against a particular set of religious beliefs or promote discrimination for or against a religion," so you better not sue, you.

Not surprisingly, the Godless Heathens at the ACLU are fretting about how atheism is going to lose its monopoly on public school indoctrination of innocent schoolchildren! But isn't a little lawsuit a small price to pay for the greater good of giving kids the option of acing every biology test by answering "God Did It"?

Rep. Butler is a treasure trove of similarly brilliant ideas. He sponsored a "religious freedom bill" that would make it illegal for schools to punish students for expressing religious beliefs in the classroom, although when asked by an Alabama.com reporter if that meant students would have to be given credit for, let's say, insisting on a test that the Earth is only 6000 years old, Butler wouldn't answer directly, instead saying, "It takes a lot more faith to believe in evolution," which suggests that teachers might want to be awfully careful about how they grade, especially since that bill was signed into law Thursday.

As all the hallelujahs from commenters on Butler's Facebook posts indicate, this bill really is an attempt to undermine science education in the name of "freedom," to bring Jesus into the science classroom. As pro-science activist Zack Kopplin has amply demonstrated, Louisiana's similar law has given school districts the green light to "supplement" the science curriculum with creationist nonsense, including that one teacher who told her sixth-grade class that the Big Bang and evolution are categorically false, and who included this question on a science test:

The correct answer, of course, is "LORD!"

Which is also the correct response to this idiotic bill.