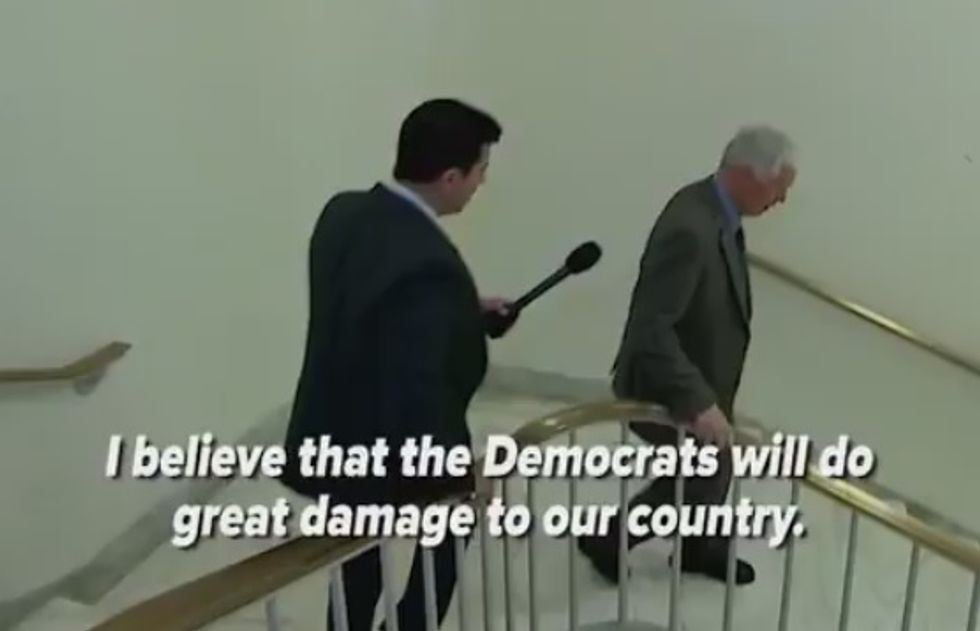 Asked whether he believes Roy Moore over his accusers, Rep. Mo Brooks tells @TomLlamasABC, "I believe the Democrats will do great damage to our country." https://t.co/6GyWp8aqrX pic.twitter.com/L2OepQOkhR

In just 14 seconds, this video of Alabama Rep. Mo Brooks fleeing down some stairs, dodging questions from ABC News's Tom Llamas, manages to sum up why there's still a fair chance Alabama will elect accused child molester Roy Moore to the US Senate. We have a feeling this may become an iconic image of the Age of Trump:

Llamas: Do you believe Roy Moore over the women?

Brooks: I believe that the Democrats will do great damage to our country.

Brooks: I believe that the Democrats will do great damage to our country on a myriad of issues.

Not even an "if the charges are true" there. Given a choice between a Democrat who convicted Klansmen who murdered four little girls in the 1963 Birmingham church bombing, or a guy who's probably a child molester and who (allegedly) attempted to rape a 16-year-old, Alabamans definitely want the accused child molester, because just think of all the damage a Democrat might do to our great nation.

Incidentally, no, "a myriad of issues" is not actually horrible usage -- while many folks condemn "a myriad of" as barbaric, The Experts say either way is OK. Just be ready to hear a lot of tiresome nitipicking if you use "a myriad of."

Yr Wonkette is supported by reader donations. Please click here to help us keep chasing idiots down the stairs of snark. Also, how about sending Doug Jones some money to help him defeat Roy Moore?