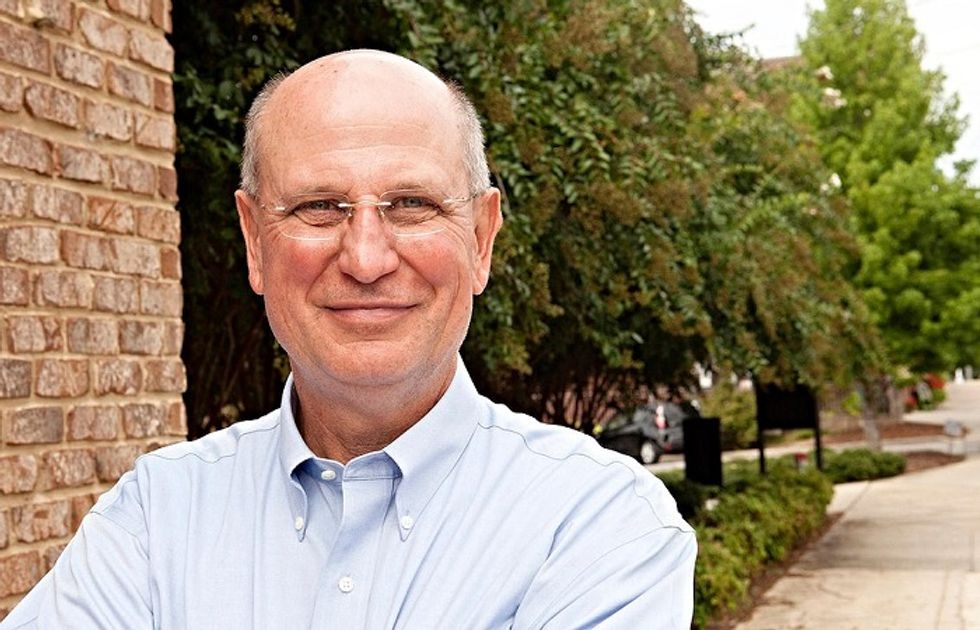 Here's a shining example of how the noble institutions of democracy can address injustice: Alabama state Sen. Larry Stutts, MD, an OB/GYN who just took office in January, has introduced a bill to repeal a law inspired by the death of one of his patients. Needless to say, Stutts insists that he just wants to keep the state from interfering with the precious doctor-patient relationship, for freedom; just please don't anybody look too hard at how that doctor-patient relationship worked out 17 years ago for one of his patients who died, we think we mentioned that, didn't we?

Senator Dr. Larry Stutts (R-Sheffield) has offered SB289, which would repeal a woman’s legal right to remain in the hospital for 48 hours after a normal live birth and 96 hours if the birth was cesarean or presented complication. His bill would also repeal State law requiring physicians to notify woman in writing that her mammogram showed dense tissue that may mask breast cancer.

Stutts took to Facebook to defend this measure saying, “I am proud to say that I am hard at work removing one-size-fits-all Obamacare-style laws from the books in Alabama.”

After 36 hours she was released from the hospital only to return around 36 hours later due to sessile bleeding that required four units of blood. She was again discharged only to die approximately 36 hours later of a heart attack, according to the report. Her autopsy revealed that Church had placental tissue still inside her womb, 11 days after she delivered her daughter Logan Rose.

Stutts was her OB/GYN and was named in the wrongful death suit filed by her husband, Gene Church. The suit states, among other things, that Rose Church was released from the hospital despite the fact that she “was suffering from placenta accreta and continued to display persistent tachycardia.”

Her husband told the Tuscaloosa News in 1999, “If the legislation had been law last year my wife would have stayed in the hospital for 48 hours and the blood test would have shown she was having problems before she was discharged.”

Stutts settled the lawsuit out of court, and Mr. Church made it his mission to pass a law requiring that insurance companies cover longer postpartum hospitalization. Gene Church brought his infant daughter in a stroller to the Alabama State House almost daily to lobby for "Rose's Law," which passed both chambers of the Alabama legislature with unanimous votes in 1999.

And now, Doctor Senator Stutts wants to repeal that law, for the good of the people of Alabama. On his Facebook page, Stutts insists that he's only doing this for FREEDOM:

[Some] in the media and elsewhere are attempting to deceive citizens by using tired liberal arguments and falsehoods. Let me be clear: my goal is to make sure our Legislature stays in Montgomery where it belongs and out of the exam room. Neither I nor my six other conservative colleagues who have joined me as co-sponsors want to deny anyone the care they need.

Also, it will save insurance companies quite a bit of money by not making them pay for women to just lie around eating bonbons and watching soap operas while they nurse their new babies, who aren't exactly productive citizens either. It doesn't appear that Stutts mentioned to any of the bill's cosponsors that, oh yeah, the thing he wants to repeal was passed after one of his patients died. After being sent home early. By him.

We bet he won't even tell his colleagues about his shiny new nomination for Wonkette's coveted Legislative Shitmuffin of the Year Award, either.

Bedford introduced the bill after his wife was diagnosed with stage three breast cancer, after months earlier receiving a mammogram in which her cancer had been masked by dense tissue.

Mrs. Bedford was not informed about the inefficiency of a mammogram to detect cancer in women whose breasts contain dense tissue, by the time her cancer was detected by other means, the disease had spread into her lymph nodes.

Again, nothing personal here -- Stutts just doesn't want the state interfering with the precious doctor-patient relationship and forcing doctors to do stuff that may not be medically necessary. No vendetta there, kids.

Even better, in his Facebook post, Stutts vows he'll continue to fight "top-down government overreach into healthcare" and combating the "inefficiencies and financial burdens that unnecessary mandates place on patients and providers." And he even promises a "thorough review of the healthcare laws of our state," so that everyone in Alabama can get the healthcare that Doctor Senator Stutts thinks is good enough for them.

Democracy is a wonderful thing: Isn't it great to know that if a woman dies after you sent her home from the hospital too soon, you can finally clear your name by obliterating the law that made you look like a bad guy?