Alabama Smashes Marriage So Nobody Gets to Play with It Now 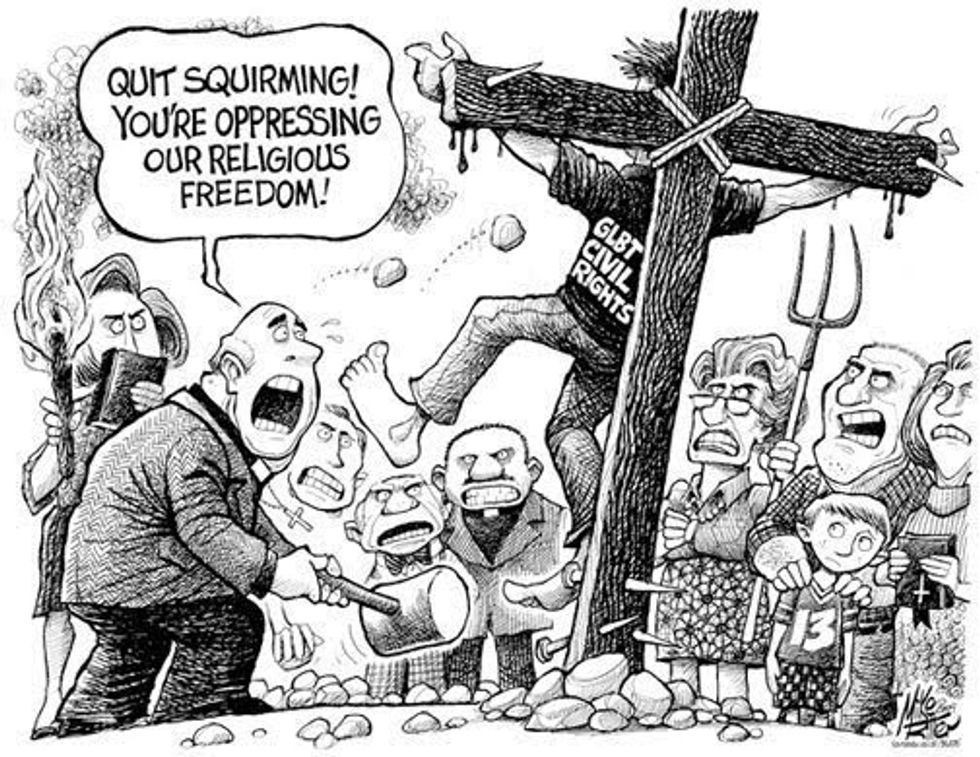 Gay marriage is oppressing the poor judges of the state of Alabama, and they've decided to fight back by wrecking ALL the marriages.

Monday was the first day of gay marriages in the great state of Alabama. Yay! However, turns out the state's conservative judges are pretty committed to stopping this onslaught of love and affection, destroying all happiness throughout the land, and completing their transformation into Care Bear villains.

After Chief Justice Roy Moore issued a proclamation on Sunday night demanding that all judges across the state obey only his words and no one else's, probates across Alabama were faced with a tough decision: obey the actual law of the land and the fucking Supreme Court and just give licenses to gay people already, or listen to the half-baked ramblings of a guy with no federal authority who CC's half the state on a mass email he sends out at ten o'clock at night. What a quandary.

Well quandar no more! After spending the night deliberating how they would handle this situation, the brave judges of Alabama decided that the best way to prevent any mix-ups was to not have any marriage at all, so there:

Citing legal confusion, probate judges in most of the counties contacted by Al.com this morning decided not to issue any marriage licenses at all - to same-sex or heterosexual couples. In some counties, including Butler County, Colbert County and Coosa County probate courts are taking marriage applications from all couples but not issuing licenses.

The clerks and judges are citing "legal confusion," which suggests they might be just a little "legal curious" if they met the right law.

By the time offices closed Monday night, the final tally of counties who just canceled marriage licenses altogether was a whopping 46 out of 67 counties, with an additional 12 counties not even playing footsie with the order and just openly denying marriage licenses solely to gay people.

Then there's this asshole:

"I'm not worried about following the U.S. Constitution," he told Al.com's Casey Toner.

Emphasis ours. When the inevitable federal investigation takes the Alabama probate judges to court for being in contempt of an order, the courts refusing to issue licenses to everyone can at least claim they were applying the law equally, like anti-miscegenation laws. However, Nick Williams isn't even hiding his open scorn for the Constitution, which seems pretty typical of strict constructionists actually.

Lest we get lost in cynicism, there is a bright spot in all this. Gay couples in nine Alabama counties finally got to say "I do" yesterday, and it was absolutely beautiful. Our personal favorite were the two gentlemen, one wheelchair-bound, who got married in matching tuxedos and rainbow-colored pixel bow-ties. There was also a lady who coined the term "Mooron" to describe all these Moore-led Morans in office, which we love.

Lastly, Alabama man Paul Hard finally got the chance to be legally wed to his late husband, who died in a car crash back in 2011 just a few months after the couple were married in Massachusetts. The deceased's mother had spent the past three years trying to deny Hard his due from his beloved's wrongful death suit, and she did it with help from Roy Moore's own law firm, which has been arguing for years that gay marriage would weaken the foundation of marriages across the state. In a way, Roy was right. Gay marriage did weaken everyone else's chance to get married, but it came from the very people who claim they're trying to defend traditional marriage. We'd call that poetic justice if we had any inkling that these people knew what justice was. Even if they did, they'd probably just break it so they wouldn't have to share.