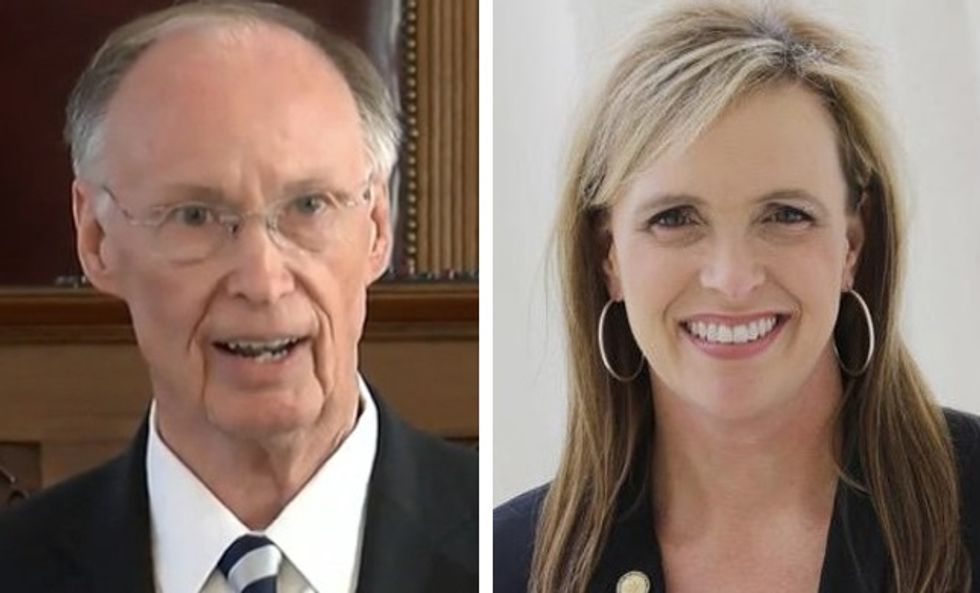 Too Hott for the Babtists!

Even though he's already resigned from office in a plea deal that avoided impeachment and saved him from any serious prison time for misuse of public funds, we're still learning all sorts of sexxy/awful details about former Alabama Governor Robert Bentley and his paramour and former top aide, Rebekah Mason (one of these days we're going to go full 1940s tabloid and call Mason Bentley's "doxy"). Buried in the investigative report prepared for the state legislature's impeachment committee is the story of Bentley and Mason being shown the door of the First Baptist Church of Tuscaloosa because of all that sinning, and maybe because the couple's gross sex-chat tape was scaring the children and turning the communion grape juice into cheap wine.

Listen To Alabama Governor Talk About Touching Dirty Pillows Of Not His Wife!

OK, maybe not the last bit, since Bentley and Mason were actually asked to leave the church about a year ago, shortly before the infamous tape of Bentley talking to Mason about how much he wanted to play with her dirtypillows became public. The details of how the governor and his doxy were asked to get out of the Lord's House turned up in a transcript of a deposition given by Heather Hannah, an aide to the then-first lady, Dianne Bentley; Hannah helped the former Mrs. Bentley confirm her suspicions that the governor was cheating (which wasn't hard since the governor synched his sexts to Mrs. Bentley's iPad).

Hannah testified that pastor Gil McKee had called the Bentleys, Mason, and Mason's husband Jon into his office for a sit-down to ask whether the rumors of an affair between Governor Bentley and Mason were true, and to

[make] everybody admit to the fact that they knew (about the affair.)

Near the time of that meeting, Rev. McKee delivered a sermon that pretty much everyone who was following gossip assumed was directed at Bentley and Mason, because what are Christian churches about if not shaming sinners among the congregation? He said that church leaders were responsible for the "spiritual depth" of the church, and explained that by leaders, he didn't only mean pastors, but also "the other spiritual leaders of the church, the deacons, the Sunday School teachers, people who have places of leadership in the congregation." You know, like maybe a governor who serves as a deacon and teaches Sunday school while allegedly boning a lady to whom he's not married (remember, Bentley insists he and Mason never Did The Deed, which we totally believe).

Oh, yes, there was more subtle nudging in the sermon:

He went on to say "a spiritual church is not some kind of social picnic club with which Satan and those who will follow him should be comfortable or supported."

"Why is it that we think that people who are living in known, unconfessed ongoing sin should be able to come into our churches where we are preaching the gospel of Jesus Christ and they should be comfortable? The truth of the matter is that some of us ought to feel uncomfortable," McKee said.

This would be a good place to mention John 7:53-8:11, the biblical story of the Woman Taken in Adultery, where Jesus spoils a perfectly good stoning of a hoor lady by admonishing the crowd that if any of them is without sin, they should cast the first stone (then a rock sails out of the crowd and bonks the lady and Christ groans, "Not you, Mom!"). This would seem to be a terrific counter-argument to McKee's sermon, exceptin' for how scholars are mostly in agreement the passage was added 300 or 400 years after the earliest Greek versions of the New Testament. Then again, your Southern Babtists say the Bible's text as handed down to King James is inerrant and perfect, so maybe it's a good argument after all.

In any case, Pastor McKee sounds a lot more judgy about who he lets in his church than Jesus was, what with all the dining with tax collectors, Samaritans, hoors, criminals, bloggers, bushwhackers, hornswogglers, horse thieves, bull dykes, train robbers, bank robbers, ass-kickers, shit-kickers and Methodists. From our atheist-admirer-of-Jebus perspective, we're happy to hear ex-Gov. Bentley's new pastor at First Baptist Church of Prattville says his congregation is open to helping Bentley become a better person and stuff, instead of throwing him out at the risk of his becoming a dirty Unitarian or something. Not that Bentley necessarily thinks he needs any spiritual improvement, since even in the middle of his filthy texts with Mason, they talked about God and Jebus a whole lot, in-between all the stuff about their loinal stirrings:

In another text she wrote "Your purpose. Your mission. Your ministry. Your service is being stolen from you."

Needless to say, Bentley talked a whole lot about Jebus in his resignation speech, too, because he wasn't just a disgraced governor who'd used public resources to further his affair, he still considered himself a fine Christian role model. The Babtists can have him.

Yr Wonkette is supported by donations from readers like you. We don't care where you put your naughty bits, as long as you put something in our kitty. Please click the "Donate" linky below the story!