Alan Keyes' Army Of One Will Declare WAR On Gay-Marrying Supreme Court, Time To Panic! 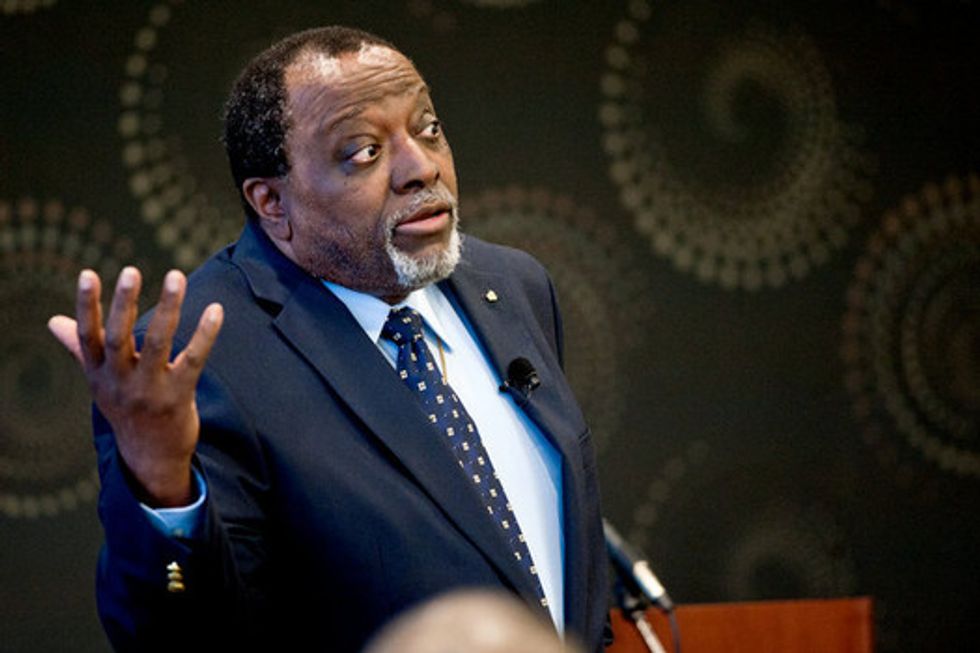 Poor Alan Keyes. He just cannot get over things. He knows his arch-nemesis Barack Obama (who probably would be hard-pressed to remember Keyes' name) is out there, making sweet love to our enemies in Iran, so that they may bomb America, together. That keeps him awake at night. And he can't stop thinking about that time, during the GOP primary debate when he was "running for president," that he derp-barfed the word "RACIST!" when the moderator asked him about his biggest regret. But sometimes life's earlier pains and struggles must be put aside, because a new war must be declared. Yes, the new enemies are the gays and their Supreme Court-enablers. If Alan Keyes does not stand up and heed this call to arms, our America will cease to exist!

Keyes lays all this out in a typically wordy, typically dumbassed WND column. Let's mock a bit of it, shall we?

The United States Supreme Court may presently make a decision discarding marriage as an unalienable (natural) right. By defect of reason and respect for the Constitution, the decision will return the people of this country to the condition of constantly impending war characteristic of the human condition when and wherever the just premises of government are abandoned.

WHOA HEY, slow down there, Thesaurus Jones! Are we really going to be returned to a condition of constantly impending war, just because Marge and Susan are finally making honest women out of each other? If so, then boy howdy, the gays are even more powerful than we knew!

Keyes goes on to say that due to the "openly flaunted prejudice of two of the justices participating in it," the decision will bring much conflict onto the people of this great land. He is, of course, talking about the fact that Justices Ginsburg and Kagan have officiated at completely legal same-sex weddings, which is a thing that judges do, if they want to. But oh no, according to wingnuts, the fact that those two ladies don't hate the gays like their justice buddies Scalia and Thomas means that they are biased and unable to render rulings on the subject. Does this argument work? Ha ha ha, fuck no, but it's funny that they keep trying to make it.

Keyes continues on for several paragraphs, using said thesaurus to create phrases like "the instrument of the tyrannical elitist prejudice against unalienable right," (just the one right, we guess) which we assume are intended to make the average reader say, "oh, this man must be a genius!" Here, have a full paragraph of the sort of word salad that would give even Sarah Palin the shits:

On the supposedly pro-family conservative side, marriage is being touted as a matter of tradition, something handed down from one generation to the next. But by this rubric, the constitutional self-government of the American people would not exist, since it came into existence in defiance of the tradition of government handed down for centuries in Great Britain. America’s complaints against British rule were, to begin with, stated in terms of the traditional rights of Englishmen. But those rights traced back to a Charter that derived its authority from the assent of a monarch who, according to tradition, rightfully came into its possession by God’s power (approved, in the final analysis, on the field of battle.)

Right. After having utterly alienated the average WND reader with his use of seventh grade vocabulary words, Keyes finally reaches his lonely, sad declaration of war, which we assume will be fought by one valiant soldier named Alan Keyes:

Like the Dred Scott decision that heralded the onset of the first Civil War, the Court’s action will bring the nation to the brink, whence “nothing but confusion and disorder will follow. …” If the justices do not tread carefully, their temerity could very well set in motion the death throes of what is still supposed to be their country.

Okay, Alan Keyes. You go have fun doing some war on everybody, and we'll be over here, doing gay stuff like having brunch and maybe marrying a dude one day. Let us know when the war starts, though, so we can be sure to look surprised.