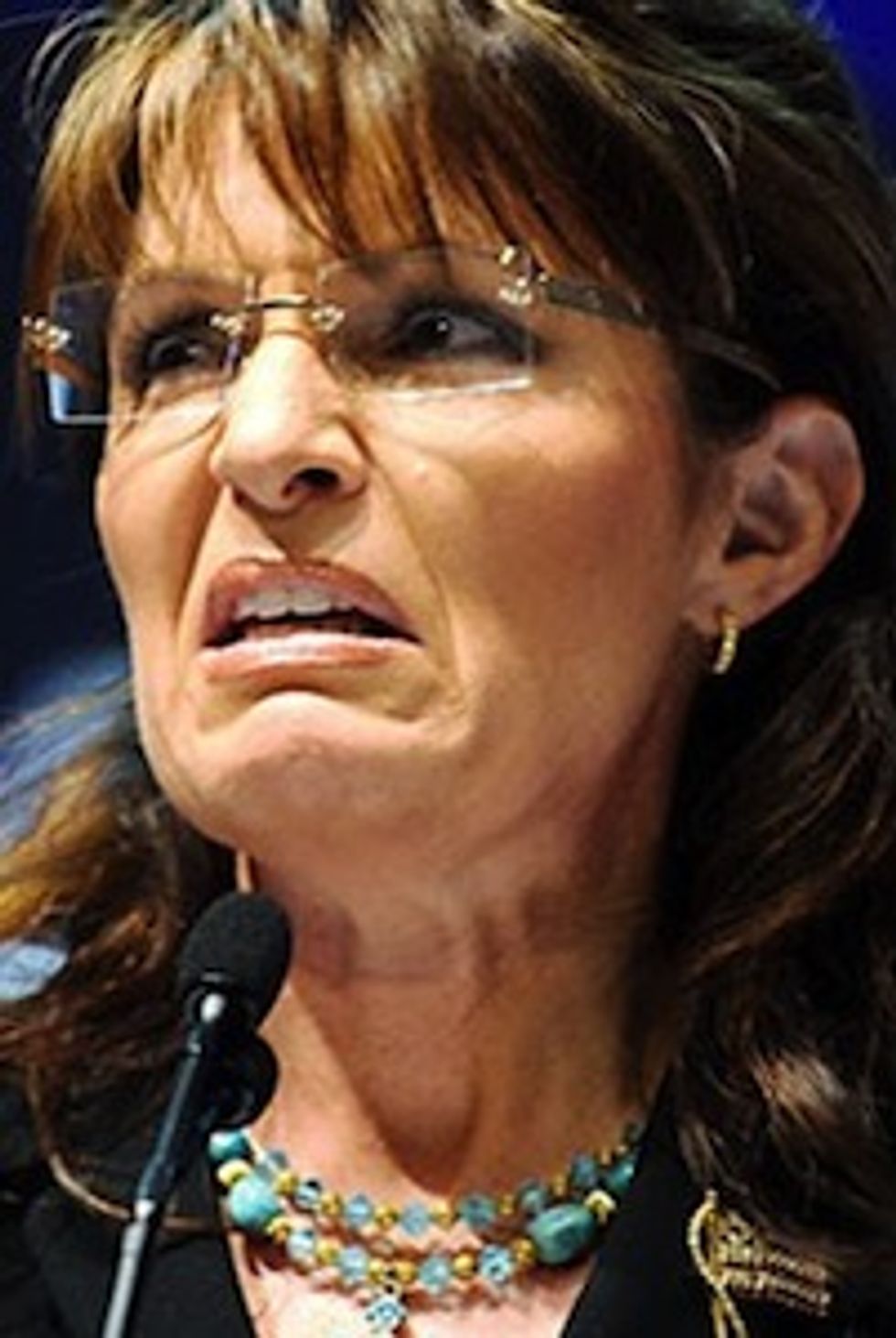 The Tea Party Leadership Fund -- wait, what? teabaggers are still a thing? apparently, yes, all both of 'em -- has an AWESOME new plan to save 'Merica from Harry Reid and the Dumbocrats, and it's so simple, it can't fail.It goes like this: 1) Make a website. 2) Use it to encourage other "Tea Party Americans" to draft Sarah Palin for Alaska's Senate seat. 3) Capitalist gold-plated big gulp-sipping freedom unicorns for everyone!

Of course, there might be one or two little details to hammer out first:

But, it being a draft, the group hasn't talked with Palin about whether or not she's interested.

Okay, well, there's that. After all, she did wipe herself out being governor of Alaska for a whole two-and-a-half years that one time, when she learned that serving in elected office for an entire term is for suckers and dead fish, and the real power comes from starring in your own failed reality TV show and spewing word salad on Fox News for eleventy billion dollars, until they nicely ask you to not come back anymore.

And Palin – whose PAC didn't respond to request for comment from Whispers – is believed to be currently residing in Arizona, not Alaska.

Oh, well, there's that too. Something about how if you are going to represent a state in the Senate, you should probably be from that state? Maybe it is in this bizarre document the Tea Party Leadership Fund mentions, something called "our Constitution"? We don't know, we have never heard of such a thing.

Then there is the other small logistical matter of how nobody in America actually likes Sarah Palin. Sure, we all enjoy a good laugh at her expense, but, like, we're laughing at her, not with her, and there is a minor difference between enjoying laughing at someone who always has stupid coming out of her mouth and wanting her to be in the Senate. (See, for example, Chuck Grassley, who should resign from the Senate already so he can spend more time amusing us on Twitter.)

But other than Sarah not wanting the job, not living in Alaska, and not having a snowball's chance in hell of getting people to vote for her, these earnest teabaggers are obviously onto something:

The fund's Niger Innis says the interest of Tea Party members in a Palin run, however, is clear.

"We didn't know that [the draft] was going to catch fire to the degree that it has. And what that tells us is that this is just the beginning," he says. "It's gone viral."

And since people forwarding a hi-larious email to friends and family for laughs -- after all, the opening line is "Do the words 'Senator Sarah Palin' excite you?" -- is the exact same thing as people giving their money and their votes to someone, you just know this plan will work. Like taking candy from a baby.