ALEC: Global Warming Is Real, And We Think It's FABULOUS 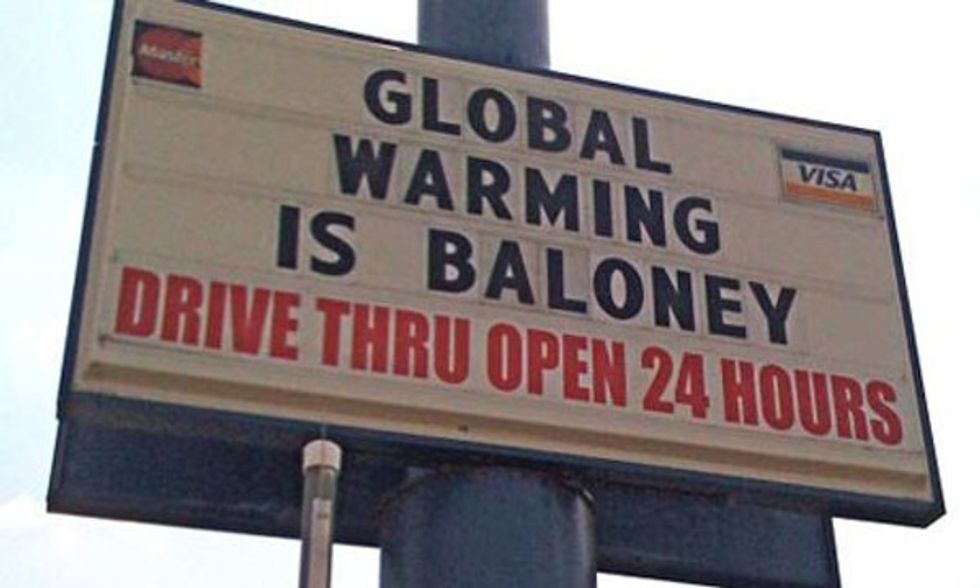 Good news, everyone! The American Legislative Exchange Council, everyone's favorite national legislative information-sharing group promoting free-market values, is officially not a nest of climate deniers. And if you say they are, they'll send you a pissy cease-and-desist letter, so there.

Just ask the libtards at Common Cause, who recently got an ALEC nastygram of their very own.

"Common Cause representatives have made numerous statements alleging or implying that ALEC denies climate change and have used such statements to urge companies to withdraw membership from ALEC," the cease and desist letter said.

ALEC's collective fee-fees are so hurt that they also sent a similar letter to the League of Conservation Voters, according to the Washington Post. That letter similarly insisted that the League “cease making false statements” and “remove all false or misleading material” from their website suggesting that ALEC denies the reality of global warming.

But how did we get to such a pass, where ALEC is risking its rightwing street cred by denying its climate denial?

You see, kids, a whole big bunch of corporations have been dropping their memberships in ALEC, which helped produce such model legislation as Florida's "Stand Your Ground" law, Wisconsin's "Right To Work" law, and one of their rare failures, Texas's narrowly defeated "Shoot 'Em All, Let God Sort 'Em Out" guns bill, which turned out to be too liberal for Texas.

But on climate, at least, ALEC promises they're absolutely on board with the science, you bet! For instance, after Google dropped out of the group, citing ALEC's opposition to renewable energy and its supposed denial of climate change, the poor misunderstood lambs at ALEC insisted that "climate change is an important issue" and that "no ALEC model denies climate change."

Instead, as National Journal points out, ALEC simply says that while climate change is real, maybe, and probably kind of a bummer, there might be some aspects of it that could be a real treat for humanity, or as an ALEC model for legislation puts it, human activity affecting the climate "may lead to deleterious, neutral, or possibly beneficial climatic changes" -- like, who knows, a thriving Dune Buggy industry in Nebraska and scuba tours of downtown Miami.

ALEC's own position statement on "Energy Principles" doesn't quite deny climate change outright. Instead, it suggests that there's still significant "debate" about the degree to which human activity contributes, and insists there's just not much that can or should be done, because it's haaaaaaaaard:

Climate change is a historical phenomenon and the debate will continue on the significance of natural and anthropogenic contributions. ALEC will continue to monitor the issue and support the use of sound science to guide policy, but ALEC will also incorporate economic and political realism. Unilateral efforts by the United States or regions within the United States will not significantly decrease carbon emissions globally, and international efforts to decrease emissions have proven politically infeasible and unenforceable [...] ALEC discourages impractical visionary goals that ignore economic reality, and that will not be met without serious consequences for worldwide standard of living.

It ain't going to work -- except for how it's already working -- so let's just let the Free Market fix things, shall we? Here's how it works in the ALEC dreamworld:

America’s economy is becoming more energy efficient and less carbon intensive, not because of regulation, but because it saves money to be energy efficient. Free markets in energy produce more options, more energy, lower prices, and less economic disruptions. Free markets will not necessarily produce the vision of a green economy desired by supporters of government intervention, but they will produce the best outcome among realistic alternatives.

See? Not a bit of climate denial there. No real action on reducing carbon emissions, either, but don't worry, the Market will fix everything, especially for those who can afford to purchase their own state legislatures.