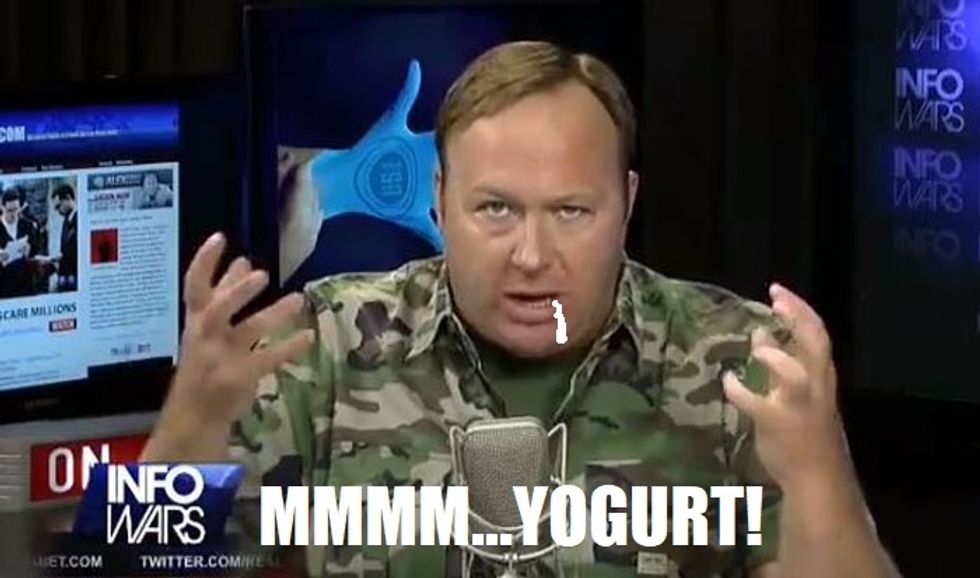 We are SO immature.

Gosh, no one could have seen this one coming! Alex Jones has reached a settlement with Chobani Yogurt after the company sued him for defamation. Jones agreed to remove social media accusations that the company, which operates the world's largest yogurt factory in Twin Falls, Idaho, had been "Caught Importing Migrant Rapists," and issued the following sort-of apology:

During the week of April 10, 2017, certain statements were made on the Infowars, Twitter feed and YouTube channel regarding Chobani LLC that I now understand to be wrong. The tweets and video have now been retracted, and will not be re-posted. On behalf of Infowars, I regret that we mischaracterized Chobani, its employees and the people of Twin Falls, Idaho, the way we did.

Comments are disabled for that particular video on YouTube, for reasons one can only guess at.

Jones has indeed removed the Infowars video segment (you can go see the "video removed by user" there) that claimed Chobani CEO and founder Hamdi Ulukaya was somehow connected to the 2016 sexual assault of a 5-year-old girl in Twin Falls by three boys aged 7, 10, and 14, because Ulukaya had committed to hiring refugees at the yogurt plant; after all, the boys were children of refugees and they were in the same town. The boys, from Iraq and Eritrea, later pleaded guilty in juvenile court on a variety of charges; no credible reporting ever suggested they were connected to the yogurt factory. Jones also made false charges that refugees brought to Twin Falls to work at Chobani were responsible for increases in crime and disease. In the removed video, the Infowars anchor even hinted there was some deep deception going on because Chobani makes Greek yogurt (a style of yogurt that's thicker and less sweet than most commercial yogurt) and Ulukaya isn't Greek at all, but Turkish!!!!!

After the lawsuit was filed by Chobani in April, Jones issued an angry, incoherent statement on YouTube -- it wasn't part of the settlement, so it's still up -- alleging that George Soros and a shadowy cabal of enemies of freedom were behind the lawsuit, as he'd been informed by his top-secret sources in Congress and the White House.

Chobani had no comment on the settlement, telling the L.A. Times simply that the matter had been resolved. It's not clear whether Jones paid any monetary damages; the lawsuit had originally asked $10,000, apparently because George Soros, for all his power, couldn't persuade Chobani to demand an amount that would truly silence Jones forever. We'll just assume that Mr. Soros is in his evil lair of evil somewhere, sipping a cocktail of Gentile babies' blood and vaccines, pleased with this small victory but plotting his next move against free people. Despite giving in to Big Yogurt, Jones remained defiant today, Tweeting out a photo of himself and Trucker Speed Buddy Roger Stone giving "the finger" to Soros, so you know he's still fighting the goof fight. No, that's not a typo.

Best comment: "You lost to your ex-wife and yogurt."

Must have been one hell of a lawyer letter.

This is yet another disappointment for Jones, who earlier this year, facing legal action from the owner of Washington DC's Comet Ping Pong, removed a video plugging the #pizzagate conspiracy theory and claimed, against all evidence, that he'd never actually believed in the conspiracy.

Yes, Idaho has bigots. But they're not winning. Your OPEN THREAD!

We guess Alex Jones won't be coming to Idaho to "show the Islamicists getting off of the planes" and prove that Twin Falls is simply drowning in Sharia Law. Darn it, we already had plans to greet him (credit to Kid Zoom for remembering this video):

Finally, kudos to the Los Angeles Times for its closing comment on the Chobani lawsuit:

Just a few weeks ago, Jones had dug in his heels when Chobani filed the lawsuit.

Until Jones did. Again.

Yr Wonkette is supported by reader donations, at least until George Soros gets off his butt and pays us like he's supposed to. Please click the "Donate" linky below!