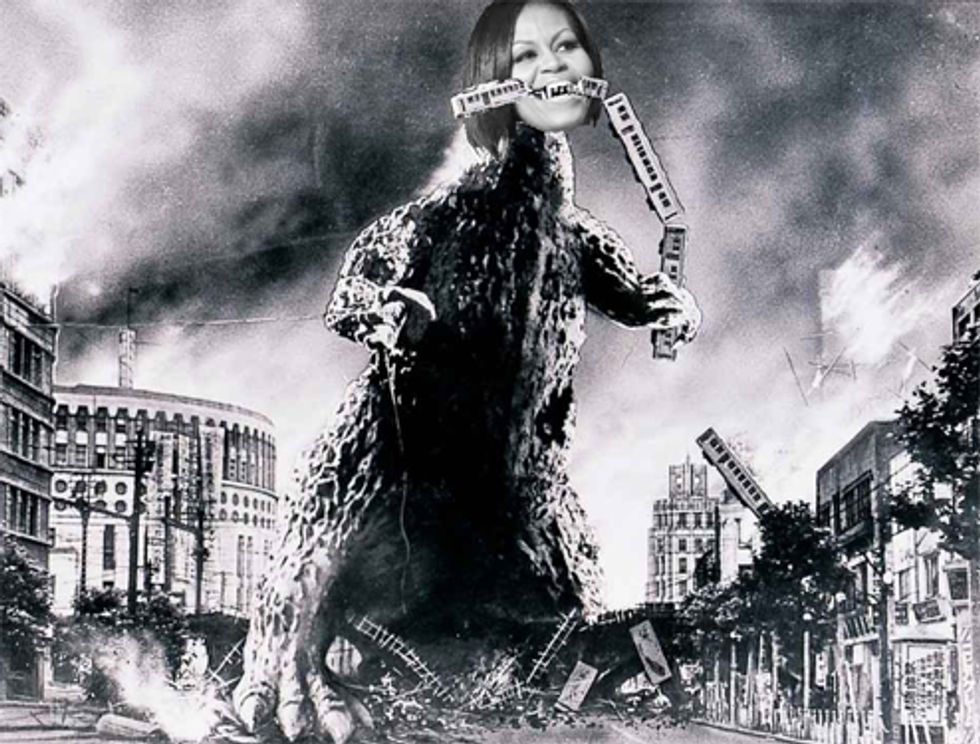 We haven't said anything about the web kerfuffle over Joan Rivers calling Michelle Obama a "tranny," simply becauseJoan Rivers for godssake. But now that certified Serious Thinker Alex Jones has weighed in on the matter, using a dumb joke as the springboard for a big ol' rant about how maybe Michelle actually is a dude, we are compelled to take the matter seriously, because to ignore the word of Alex Jones is to miss out on the opportunity to point and laugh.

Jones is pretty sure that Rivers is just being excoriated by the politically-correct sheeple because she had the guts to say what EVERYONE (or at least everyone who knows Real Science) is thinking anyway:

Well, Joan Rivers talked about it the other day, and now it’s an international news story. The question is, "Who is Michelle Obama? Is she really a woman? Is she a man?"

Now, I’m not drawing any conclusions here, but I know this -- it’s fair to question anything and everything this administration says. I can’t think of an administration in history that’s been caught with such a perfect record of everything they say and do being a lie or a fraud.

Yes, and this is precisely the point where we wish Barack Obama would call a news conference to insist that tickling rabid dingoes is a dangerous practice.

Jones continued, laying out his irrefutable case against Michelle Obama's femininity, based on the black women he has known and on firm, undisputed science facts:

These people are the authors of such tyranny that they shouldn’t whine and complain when the public doesn’t believe anything they’re saying -- especially when every time I look at "Michelle" or "Michael" Obama, the First Lady, or First Tranny, something doesn’t look right.

She doesn’t look like any black woman I’ve ever known ... She’s got shoulders that are wider than a man’s, which physiologically doesn’t happen. You can put three heads on a man’s shoulders, and two heads on a woman’s shoulders -- that’s a known anatomy.

We just have to steal from wonk pal Steven Maines here: So where exactly is Alex Jones's head?

Anyway, it's not just that Michelle Obama might star in a video for "Dude Look Like A Lady" -- no, it's much more serious than that. Even if she does have the correct ladybits, says Jones, she may very well be evidence of the government's long-term project to destroy humanity through genetic manipulation and eventually replace the survivors with cyborgs. You see, the only women-born-of-women that he's even known of who look like Michelle have a “chromosomal disorder” resulting from “all this toxic waste and GMO that’s been introduced.” Again, this is just science. Do your research, people. It's on the interwebs.

“For me,” he continued, “this really isn’t just a laughing matter. It’s not just the sexuality, but the very genetics of the human species across the board is being manipulated.”

“There’s also been a small percentage, a small statistic, of men who identify as females and females who identify as males,” Jones added. “And I don’t judge that, I’m just sick of the societal obsession with it. It’s clearly being pushed, and what I’m tired of is the force-feeding of all of this culturally, to reduce population and break up the family.”

Not that he judges.

Jones also took a moment to explain that Aldous Huxley's Brave New World wasn't so much a satire about blind faith in technology and science as it was a set of instructions for how the New World Order (Fact: Huxley's brother Julian was a biologist who was the first director of UNESCO!!!!!!!!) would eventually "end the sexes as we know it, and create biological androids to serve the state.”

You know, it's like how The Manchurian Candidate was true, too.

Case closed: Michelle Obama, take your big ol' man hands off America's throat, which you have been cramming trans* people down, and everybody else, get to your bunkers, buy more gold and survival seeds from Alex Jones, so that your family can survive the rise of the Machine Men!

And yes, of course there's video if you're a glutton for punishment: