Alex Jones: I'm No Homophobe, It's Just That UN Is Using Gays To Kill Off Humanity 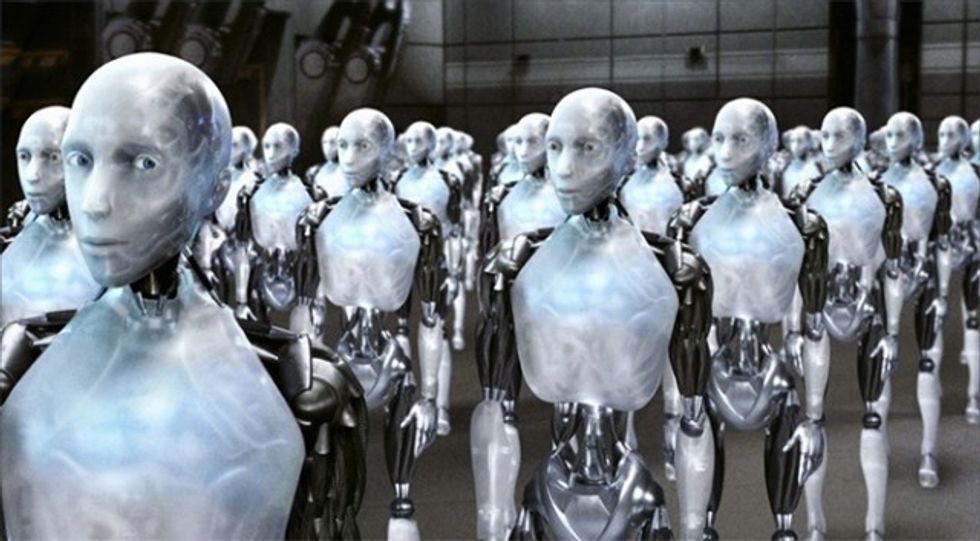 One-man conspiracy theory clearinghouse Alex Jones wants you to know that he doesn't care what you people are doing in your bedrooms. He thinks that all the foofaraw over same-sex marriage is a mere distraction from the real threats to freedom and liberty, which of course derive from the Power Elites' plans to exterminate humanity and replace it with a docile race of cyborg slaves, which you would know about already if only you had been paying attention. But there you were again, asleep at the switch, or thinking about Caitlyn Jenner's funbags.

It's really quite simple, Jones explains:

Jones says that because he's a libertarian and not a hypocrite, he has no interest in people's sexxytime preferences, which is awfully nice of him, not just from the perspective of freedom but also because the market for crazy people obsessed with buttsex is already saturated.

Which is not to say that there's not a larger agenda at work, but it goes far beyond the trivial Lisa Frank pictures of unicorns and rainbows of the gay agenda. No, Alex Jones wants you to know about the more sinister Trapper Keeper of the international plot to get rid of humanity, of which growing societal acceptance of gay buttsex is only a tiny part:

Now, the truth is, there is a move at the UN, there is a move to sexualize children, [Viacom CEO] Sumner Redstone has said that. And it's nobody's business to target children with Heather Has Two Mommies or "you can't say boy or girl because somebody may not identify as that." That is space-cult, suicide-cult, exterminism, craziness.

The eugenics, trans-humanist cult wants to confuse the general species ahead of rendering us down and removing us. The decision has been made. Cheer up, the post-human era is dawning. The plan is an asexual humanoid, even if they decide to keep us around, stated in hundreds of textbooks.

You see? It all makes perfect sex! Err, sense. One of Jones's recurring boogeymen is the sci-fi notion that once all the global elites achieve their dream of uploading their brains into powerful computer networks, they'll have no use for the rest of humanity, so they'll exterminate us, or maybe turn some remainder of humanity into brainless Morlocks kept on to do some of the dirty work. And so it only stands to reason that Alex Jones is the real-world John Conner, trying to alert us to the rise of our man-machine overlords before it's too late. We're just too brainwashed to see simple truth when it's right in our faces, in the form of a children's book that suggests that families come in all different types. And if you watch MTV, you're all drinking the poison-spiked Flav-r-Aid.

Just for the sake of our Sunday column, though, we sure would like to find some of those textbooks he's talking about.