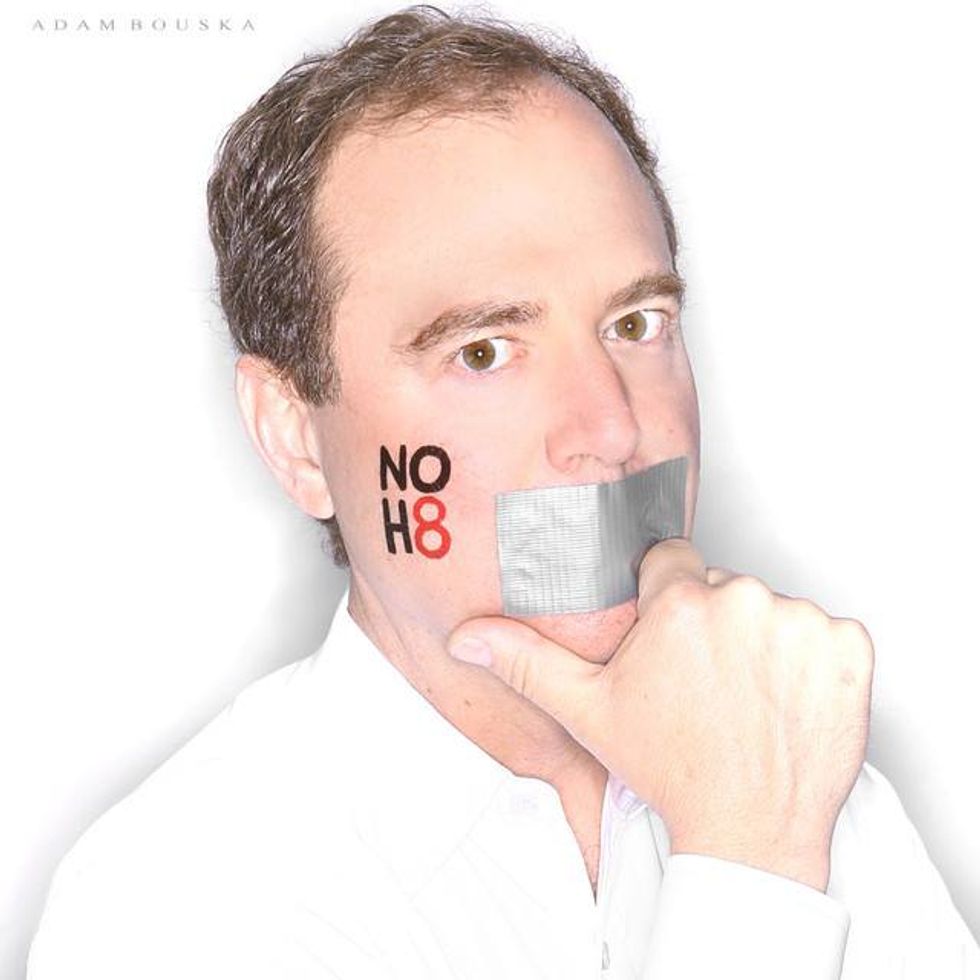 He is sucking your dick, WITH HIS EYES.

We don't know how to tell you this, but crazy weirdo conspiracy theory man Alex Jones lost his temper recently. Now, as Jones has explained in the past, Wonkette is FAKE NEWS, but we encourage you to give the video below a look-see, and see if we are lying. Jones is very upset that Rep. Adam Schiff, the mean Democratic ranking member on the House Intelligence Committee, is so intent on doing a real investigation into the Trump regime's ties with Russia, that he's impugning the sacred patriotism of people like Donald Trump's Studio 54 buddy Roger Stone, who is such an important target of the Deep State CIA that he gets assassinated on a regular basis. It is very :(

But what you may not realize is that, on top of how Schiff totally sucks IN GENERAL, he also, according to Alex Jones, sucks FOR LITERAL, like on peeners. How can Alex Jones tell? He can see it in Schiff's eyes! He explained all this in a cuss-laden rant to Stone:

I’m not against gay people. OK. I love them, they’re great folks.

But Schiff looks like the archetypal cocksucker with those little deer-in-the-headlight eyes and all his stuff.

Also, isn't Roger Stone a bisexual? At least back in his Studio 54 days, ALLEGEDLY? Is it possible that HE is also the Archetypal Cocksucker? Hmmmmm:

Nope, no archetypes there.

And there’s something about this fairy, hopping around, bossing everybody around ...

PRANCING LIKE A FAIRY PRINCESS TINKERBELL-LOOKIN' BASIC QUEEN, even?

... trying to intimidate people like me and you, I want to tell Congressman Schiff and all the rest of them, “Hey listen asshole, quit saying Roger and I” -- and I’ve never used cussing in 22 years but the gloves are off --

“listen you son of a bitch, what the fuck’s your problem? You want to sit here and say that I’m a goddamn, fucking Russian. You get in my face with that I’ll beat your goddamn ass, you son of a bitch. You piece of shit. You fucking goddamn fucker. Listen fuckhead, you have fucking crossed a line. Get that through your goddamn fucking head. Stop pushing your shit. You’re the people that have fucked this country over and gangraped the shit out of it and lost an election. So stop shooting your mouth off claiming I’m the enemy. You got that you goddamn son of a bitch? Fill your hand.” I’m sorry, but I’m done. You start calling me a foreign agent, those are fucking fighting words. Excuse me.

Excuse you, indeed, good sir! We counted, and he made 23 cusses about Adam Schiff, which is a lot of cusses for somebody who's never used cusses in 22 years.

We honestly don't know what Schiff said that's chapping Jones's B-hole so violently, but we guess it has something to do with how his pal Stone is a target of all the investigations into Trump/Russia collusion, and that said investigations also are looking into right-wing websites like Dead Breitbart and (cough!) Alex Jones's InfoWars, to see how much they helped in spreading Russian disinformation throughout the 2016 campaign. But Alex Jones is obviously too smart to be an unwitting tool of the Russians, wouldn't you think so? Alex Jones would think so.

Except wait, UH OH! Maybe we just found the evidence, because we went to Schiff's Facebook page and it turns out he posed for Adam Bouska's NOH8 project, which is about supporting the gays and the BLTs, and his eyes indeed look VERY PRETTY in his picture. Are these the sorts of gay eyes Alex Jones is apparently intimately familiar with, that have the magical power of sucking the 'D'? We don't know, but WHOA IF TRUE!

Our bad, Alex Jones was right the whole time, said nobody ever, THE END.

Wonkette can't suck dick with our eyes. OR CAN WE? Anyway, give us a donation by clicking below.