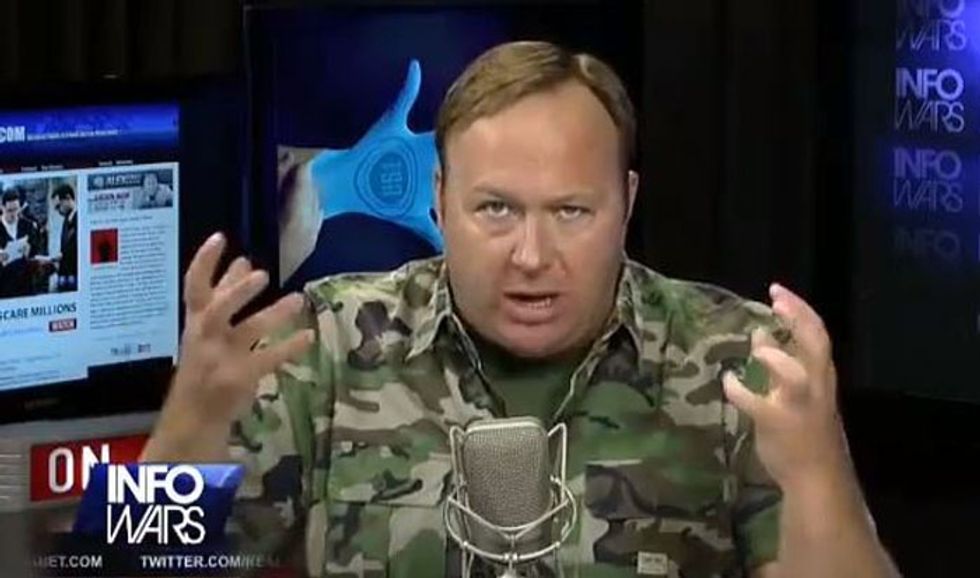 As expected, Alex Jones and Infowars and all the other geniuses on the internet have already come out with several theories about how the Las Vegas shooting is definitely not at all what it seems. Of course, it's pretty difficult to claim that something bad happening is a result of the government initiating a false flag attack against citizens for the purpose of taking away guns when both the executive and legislative branch are controlled by Republicans, but thankfully they've invented the "Deep State" conspiracy theory to take care of any cognitive dissonance.

Jones's first theory on this front related to a conspiracy theory he was promoting last week, which is that all the Leftists and Antifa people were planning a "civil war" and were going to do an October Revolution to all the good, patriotic Trump supporters in this fine nation. And, clearly, Stephen Paddock, a 64-year old man, was in cahoots with all of these college students somehow and helping them with this plan.

Jones explains that although "reports" have said that the revolution is supposed to take place on November 4, that is a fake date that was given in order to confound police, and Jones himself was saying all along that actually, it was going to start October 1 to commemorate the 100th anniversary of the October Revolution in Russia.

There are many, many flaws in his logic here, starting with the fact that last night was in no way the anniversary of the October Revolution. That would either be October 25 if you are using the Julian Calendar as they were at the time (the Soviet Union would not switch to the Gregorian Calendar until February of 1918), or November 7 on the Gregorian calendar. I'm guessing that if anyone were planning to shoot up a country music concert in order to celebrate the 100th anniversary of the October Revolution, they would probably try harder than Alex Jones did to get the actual date right. There are two to choose from! He got neither correct!

OH. Also, part of Jones's evidence is the time last month when a dude in Seattle threw coffee at him. Obviously a classic Bolshevik tactic!

Another fella over on InfoWars, David Knight, also doubled down on this theory.

“As we look at the 100 year anniversary of the Bolshevik Revolution and as we talk about last week...Talking about multiple groups saying, ‘It’s coming Nov. 4. We have a new civil war that is coming to overthrow the government.’ Talking about how these Antifa communists are training with weapons, etc. So, there was a lot of stuff that was on the horizon.”

He later stated that this was also the work of Democrats in Congress who are trying to enact gun control legislation and doing bad Deep State stuff to make that happen.

Upon hearing the news that ISIS took responsibility for the attack (which they literally always do with any attack) and the false reports that Stephen Paddock had recently converted to Islam, Jones decided that both of these things were true. And that "the left" was celebrating the attack. Which is a pretty gross thing to say!

Yes, this all makes a lot of sense. Jones explains in this next video that Stephen Paddock, a 64-year-old man living in a retirement community, was not only in cahoots with Antifa, but also with ISIS, because all of the leftists are converting to Islam these days.

According to Jones, all his CIA and government and military contacts are telling him that the leftists are also only just pretending to convert to Islam for the purpose of tricking the Right into a Civil War, which we want, so we can destabilize the government, for reasons.

He claims he spoke with a CIA counterterrorism expert who told him:

Said CIA counterterrorism expert also knows that we, the Left, plan to doublecross the Muslims. How? Not sure.

So, just to recap! Leftists are taking up arms and doing all kinds of gun and weapons collecting and training, and becoming fake Muslims in order to secure help of some kind from ISIS, but Stephen Paddock, a 64-year-old man living in a retirement community, became a real Muslim and was recruited by Antifa/ISIS to shoot up a country music concert in order to celebrate the 100th anniversary of the October Revolution on the wrong day, for the purpose of both destabilizing the country and helping Democrats in Congress enact gun control legislation. And the CIA and the military know all about this, but are basically helpless to do anything about it? I guess?

That seems like a lot of effort! Also I'm kind of surprised that I haven't heard anything about this in any of the circles I run in. Sure, I haven't done any black bloc-ish stuff since college, but I would like to think that someone would have hepped me to all these nefarious and bizarrely complicated plans that we've got going on that make absolutely no sense. I hate feeling out of the loop.