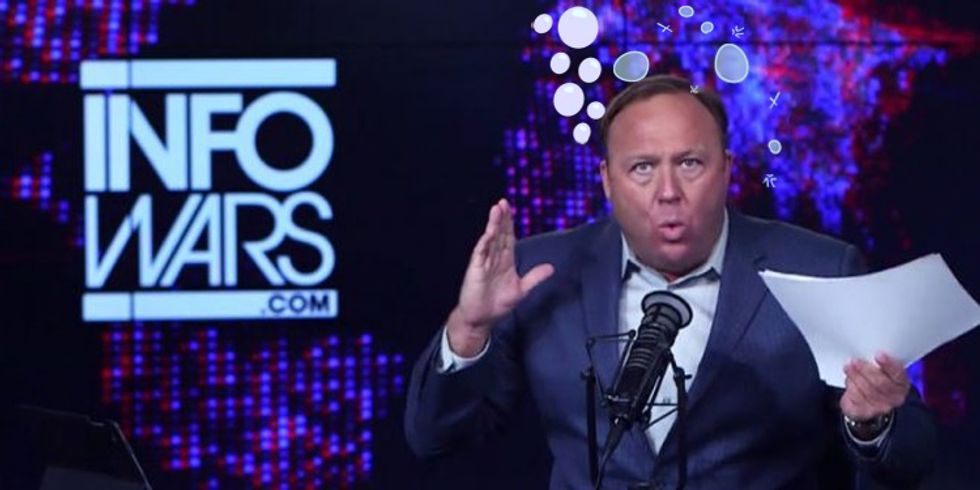 It's a blatant attack on European cultures!

Poor oppressed human conspiracy pop-up dispenser Alex Jones has been having a rough week, what with his completely insane, sad custody trial, and now he's being sued by Greek yogurt company Chobani over some typically Jonesian "journalism" that falsely claimed the company was connected with last summer's sexual assault of a 5-year-old girl in Twin Falls, Idaho; Jones's Infowars website also claimed the company's plant near Twin Falls (mandatory description: world's largest yogurt factory) was responsible for a tuberculosis outbreak.

“Idaho Yogurt Maker Caught Importing Migrant Rapists,” read an April 11 tweet from Infowars highlighted in the complaint. The tweet linked to a video containing what Chobani said were false statements about the company. The complaint also cited an August 2016 article that suggested Chobani was responsible for a “500% increase in tuberculosis in Twin Falls.”

Chobani had requested Jones remove the reports, which are still up on Jones's YouTube channel and his Infowars site. The lawsuit cites calls for boycotts of the company by irate Jones followers, who are already swarming with far less healthy bacterial colonies.

“The Defendants’ defamatory statements have caused and continue to cause harm to Idaho residents, including Chobani employees, their families, and other members of the Twin Falls community associated with Chobani,” read the complaint.

Rightwing blogs went crazy with stories of a 'gang rape' by 'Syrian refugees' that turned out to be mostly paranoid rumor. So when authorities clarified what happened, obviously that was part of the cover-up, too.

The Infowars video segment from April 11 claims Chobani CEO founder Hamdi Ulukaya, who's from Turkey and therefore a dangerous threat to Western Culture, was somehow connected to the 2016 sexual assault of a little girl by three boys aged 7, 10, and 14 at the time, who eventually pleaded guilty in juvenile court. While the crime was horrible enough as it was, the rightwing blogosphere exaggerated the incident into a "gang rape" at knifepoint by a mob of Syrian refugees; several rightwing blogs buried the ages of the assailants far enough in the text that a casual reader might assume the crime had been committed by adults. The boys were also not from Syria, but from Iraq and Sudan.

The Infowars report suggested that the story of the assault had been ignored by the mainstream media or downplayed by reports that focused on the right's hyperbolic exaggerations, because of course Big Media is in league with Big Yogurt to flood America with refugees, any of whom could be a rapist:

So interestingly, while this story of these three refugee boys pleading guilty has received almost zero national attention, the owner there of Chobani was given a very glowing 60 Minutes interview where they praised him for being such a great "jobs creator."

The report went on to state a Breitbart report saying the Chobani factory had "brought not only refugees, but crime and tuberculosis" had been falsely derided as "fake news," and that the 60 Minutes profile of Ulukaya was part of an effort to sweep the crime under the carpet and rehabilitate the image of Chobani. (Just to get extra ridiculous, the anchor, Alexander Jones, intones that while they call it "Greek yogurt," the owner is actually Turkish, OMG!) Also -- very very scary -- Ulukaya has been connected with the Clinton Global Initiative and with Davos! And he wormed his way into getting his yogurt into Michelle Obama's terrifying healthy school lunch program, even though he's still a Turkish citizen! The report then moved seamlessly into a litany of stories about radical Muslim terrorism in Europe.

Jones responded to the lawsuit with a YouTube statement vowing eternal defiance to the terrible globalists at Chobani, claiming that hie very special "sources" inside Congress and the White House had assured him the Chobani lawsuit was being orchestrated by George Soros, who in addition to rigging the world economy and being behind the poison gas attacks in Syria, always finds extra time to Make Life Difficult For Alex Jones. Let's just assume Jones's sources are shape-shifting aliens who have occupied the bodies of a series of political aides since the Illuminati Masons built Washington DC, because that seems every bit as plausible. Credit to Washington Post reporter Derek Hawkins for presumably keeping a straight face as he typed, "Soros is not named in court documents, and there is nothing suggesting he is involved in any way."

Says Jones in the video response,

I’m not backing down, I’m never giving up, I love this [...] They have jumped the trillion-pound great white shark on this baby.

But only for child custody hearings, mind you.

It's not immediately clear from the video whether Alex Jones is actually saying that, or if it's just the character he plays in those performances of his. We'll assume it's the character, since this latest rant wasn't filmed in his car while he keeps missing the entrance to a parking lot.

We're also not quite certain why George Soros would bother getting involved in the Chobani suit, which is only seeking $10,000 in damages, plus attorney fees and an admission from Jones that his stories were wrong. Now that he's promised to fight unto his last breath, expect him to remove the video and other stories, say they were taken out of context, and that he never had a problem with Chobani at all, just as he did when threatened with a lawsuit over his promotion of "Pizzagate." Then again, maybe he'll decide to pay out the $10K, which he can make up later by selling more Trucker Speed.

Now that Jones is seeing conspiracies in creamy strained yogurt, however, we sure hope he doesn't come across this brilliant John Scalzi short-short story, "When the Yogurt Took Over." He might find out the yogurt's true plans for all of humanity.

Yr Wonkette is supported by readers like you, though your microbiome is healthier than anyone else's here. Please share your good fortune by clicking the "Donate" linky below!