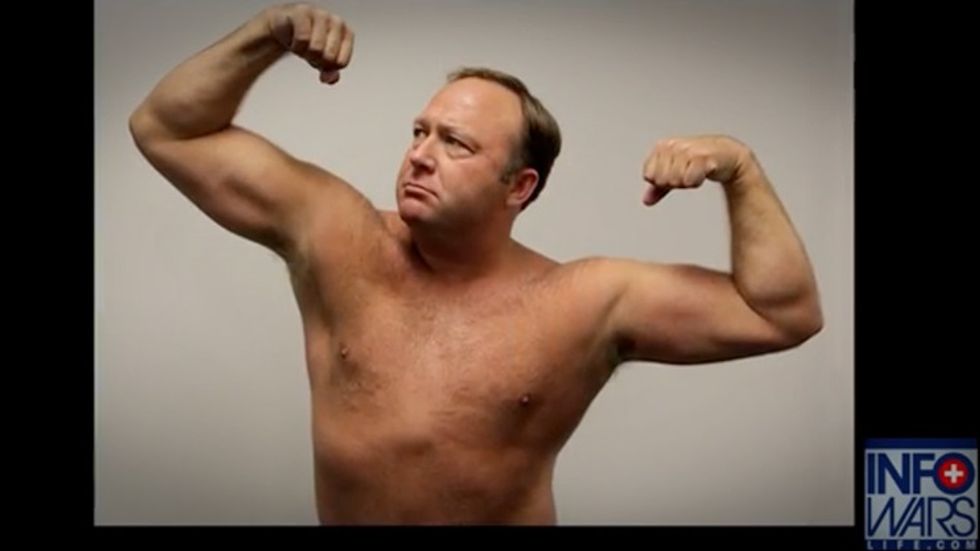 Alex Jones is one awesome guy who sells a steady stream of snake oil -- both in the form of stupid conspiracy theories and also in the old-fashioned sense, with an "InfoWars Store" full of nostrums to enhance viewers' virility, boost their stamina, bulk up their muscles, and load up their credit cards with debt that will be erased when SHTF and civilization collapses anyway, so don't worry about it. No less an expert on surviving crisis situations than Roger Stone depends on Alex Jones Trucker Speed for the speed and stamina needed to escape Hillary Clinton's Death Squads, except for the times the CIA has killed him. (Stone got better. Probably with help from InfoWars snake oil.) Earlier this year, New York magazine estimated Jones may bring in between $15 million and $25 million a year from selling overpriced vitamins and herbs and crap. As Gizmodo says of Jones's shrieking rage factory, it’s really "a dietary supplement business hiding behind a debased, unreliable, and exhaustingly stupid news network."

[wonkbar]<a href="http://www.wonkette.com/528426/alex-jones-warns-of-obamas-plot-to-replace-humanity-with-cyborgs-is-somehow-not-taken-seriously"></a>[/wonkbar]Jones worries about medical conspiracies all the time. He screams about how chemicals in the water are turning frogs gay and warns of the shadowy elites' plans to bio-engineer themselves into semi-immortal cyborg supermen, while ordinary folk are medical-genocided by vaccines full of cancer. So of course the punchline is that a lab has found illegally high amounts of lead contamination in two of the products Jones pitches through his website.

The Center for Environmental Health (CEH) (whose work Gizmodo notes Jones has cited in InfoWars stories about how The Powers That Be are poisoning you) bought samples of the products online at InfoWars, and found a whole lotta lead in "Neanderthal Pre-Human Drink Powder" and "Myco-ZX." Newsweek has the heavy metal details:

Myco-ZX is “an all-natural blend of potent herbs and enzymes that support the body's healthy detoxification of yeast and undesirable fungal organisms.” It contains licorice root and anise seed.

CEH has filed a legal notice in California against InfoWars, claiming the products violate state laws against businesses exposing Californians to "significant amounts of chemicals in the products they purchase" without notifying consumers of the risk. The research director for CEH, Caroline Cox, says she's not trying to hurt Jones's business, but rather to protect the public from people selling stuff with lead in it. Sounds like a worthy goal either way!

CEH isn't the only organization to test Jones's trucker speed products. In August, Buzzfeed hired a lab to test six InfoWars supplements and found that while they did contain the substances listed on the labels (and no nasty surprise heavy metals), the amounts in the InfoWars supplements were actually lower than similar products you could buy cheaper elsewhere. Caveman Paleo Formula and Myco-ZX were not among the products Buzzfeed subjected to testing, although the research team did look at the listed ingredients and said they were unlikely to do much of anything ("lead" wasn't listed, for some reason). Buzzfeed's contracted lab also didn't test "Brain Force," the supplement that kept Stone safe from Hillary's death squads, though its review of the label ingredients said, "At the current serving size, however, dosing is significantly lower than expected for most ingredients."

Be careful, Mr. Stone. What if Hillary's death squads are getting their brain supplements at GNC?

Yr Wonkette is fueled by reader donations. Please click here so we can help enhance YOUR brainpower!