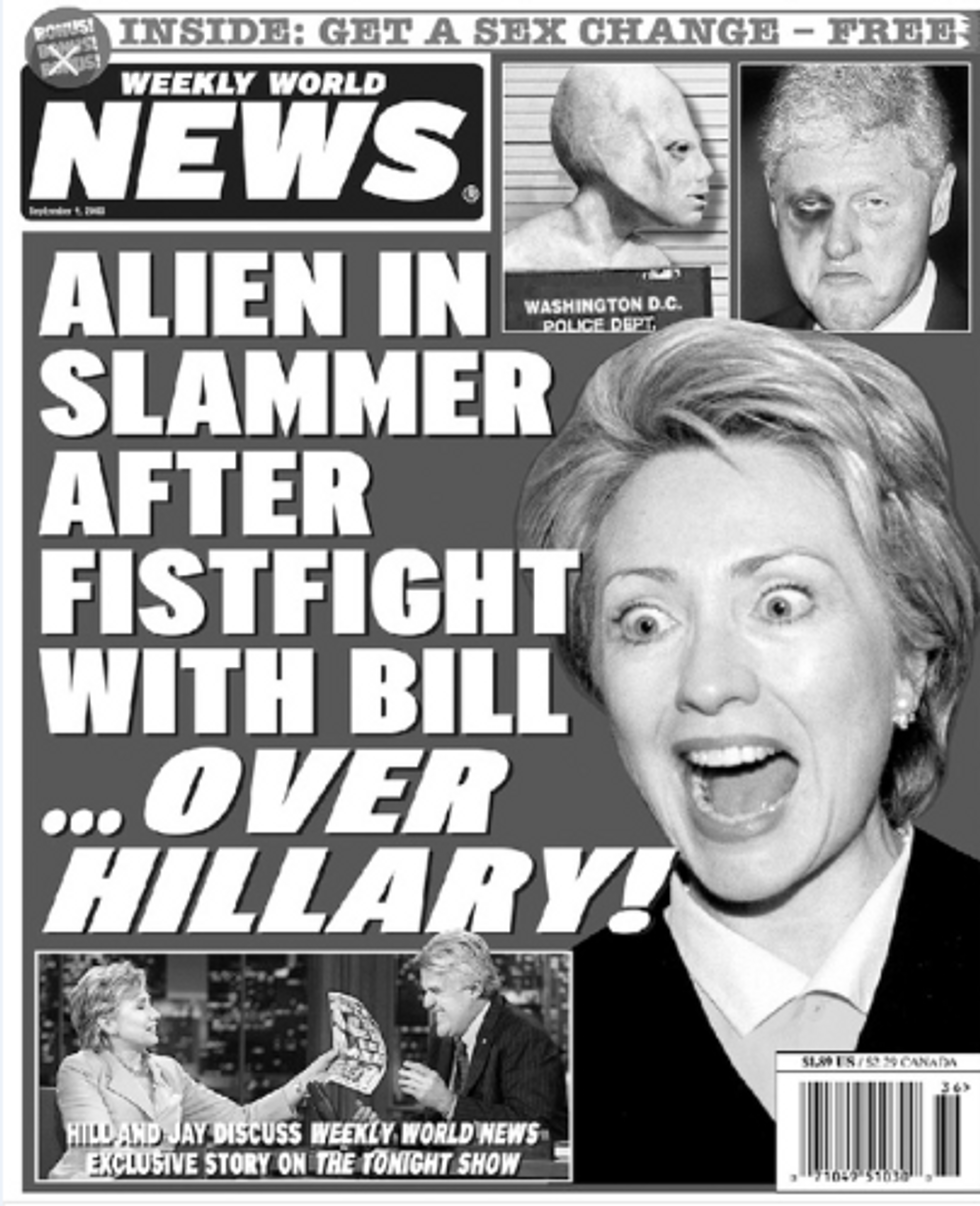 Goodness, that sounds like a headline from that silly Weekly World News tabloid rag, doesn't it? Has Wonkette sunk so low in its desire to #rig the election that we are using crazy sources like that? No! But Sean Hannity has, because his blind Trump support has gotten so pathetic lately, he's basically indistinguishable from Alex Jones. It's not like Hannity had far to fall, because as Megyn Kelly and everybody else knows, Sean Hannity is not a real journalist.

Now, we all know Hillary Clinton did all the #scandals. She sent all the emails and she did Benghazi while her body double was covering for her at home THE WHOLE NIGHT. She faked the moon landing, too, with her pantsuits.

Monday night, Sean Hannity had a nice, normal, sane guest named Jeff Rovin on his Fox News teevee program "Trump Can Grope Me Anytime He Wants," and Rovin revealed THE REAL TRUTH about Hillary. As Media Matters explains, Rovin is the former editor of Weekly World News, and he claims to have been a "fixer" for both Billary and Killary Clinton, the guy who found all the men and ladies for them to do sexxx with. He is very convincing!

Before we get to the transcript, you should know the National Enquirerbroke all this "news," without saying Rovin's name, last week:

Hillary Clinton is a secret sex freak who paid fixers to set up illicit romps with both men AND women!

That’s the blockbuster revelation from a former Clinton family operative who is sensationally breaking ranks with his one-time bosses to speak to The National ENQUIRER in a bombshell 9-page cover story — on newsstands Wednesday.

“I arranged a meeting for Hillary and a woman in an exclusive Beverly Hills hotel,” the man, who was hired by the Clintons, via a Hollywood executive, to cover up their scandals, told The ENQUIRER.

OH YEAH, BRO? Did Hillz bang that lady real good? YOU BET SHE DID. Rovin allegedly helped her "slip out of a back exit"! Also, according to the Enquirer, Hillary banged Vince Foster a bunch of times, and the whole Clinton team colluded to discredit Monica Lewinsky. BIG TABLOID STUFF!

So now Rovin has "come forward" to tell the very stupid Sean Hannity all the news about what he did for the Clintons:

HANNITY: Smearing happened. Money was paid. Orders were given. You were to go out and damage the reputation of people like Monica Lewinsky.

ROVIN: Well I didn't personally go out and damage it, but ...

HANNITY: Part of an effort.

ROVIN: It was a team effort, yeah.

HANNITY: Got it. This was an open marriage with the Clintons.

ROVIN: So it's been said.

SEAN HANNITY NEEDS TO HEAR ABOUT ALL THE SEXXX SCANDALS, IN LURID DETAIL!

HANNITY: They also claim that in fact, Hillary did in fact have a romantic relationship with Vince Foster.

ROVIN: That was pretty much of an open secret in our circles, and the order to intervene with the press for at least a half hour after he committed suicide ...

This is all super legit and awesome and we definitely believe this guy so much. For context, Media Matters shares a few Weekly World News cover headlines, to help us understand where this Rovin guy -- who is also a sci-fi author! -- is coming from. Like, for instance, the picture up top of this post! And also this one:

Rovin told Hannity that the real reason he's revealing all his "memories" of "sexxx fixing" for "The Clintons" is because he's so grossed out by all the salacious sex scandals on BOTH sides during this election, and he wishes everybody would just stop:

ROVIN: The important message to get out ... is the election is too important to focus on the salacious material. ... I am not doing this for or against any candidate. I'm doing this hopefully to ...

ROVIN: Level it, and I hope that this stuff is so unpalatable that we just stop. I mean, I know that's an absurd dream ...

A conspiracy theory-loving boy can dream, can't he? He doesn't want to hear about Trump's sexual assault groping, and he doesn't want to hear the lurid details from his own hazy memory about how he personally arranged lesbian fingerbang time for Hillary Clinton, or helped cover up that Hillz and Vince Foster did #nakedtime together.

Sean Hannity, still literally slobbering over orange dreamboat Donald Trump, really needs to make sure this dude is voting the correct way, even if he's "coming forward" for only the purest of reasons:

HANNITY: Who are you voting for?

ROVIN: One of those two!

It would be UNPALATABLE for crazy tinfoil hat man to say who he's voting for!

So, have we learned anything new in this post, besides how Hillary Clinton has a secret fetish for Alien Bigfoot Boning? No, we have not.