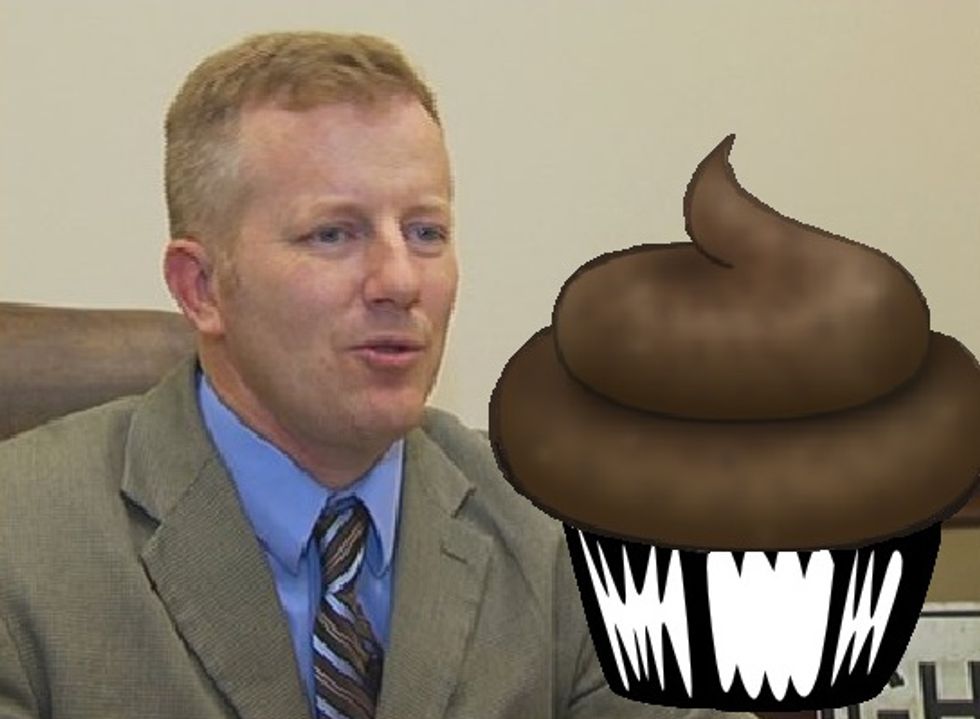 A big congratulatory rubber-gloved handshake to Tennessee state Sen. Stacey Campfield, our inaugural winner of the Legislative Shitmuffin of the Year Award, State Legislator Division. And indeed, who more fitting than the very man whoinspired the creation of the award? And so we doff our leather kitten headgear to you, Stacey Campfield, for outstanding achievement in the field of trying to make life miserable for the people of Tennessee.

Oh, sure, there were other candidates. There was the libertarian New Hampshire state rep. who thought maybe penalties for assault should be downgraded, since "Some people could make the argument that a lot of people like being in abusive relationships." There was Texas state Rep. Jodie Laubenberg, who thought rape kits cause abortions. There was another Texas nominee, state Sen. Bob Deuell, who proclaimed that pregnancy can only occur during “accurate intercourse”. And then Arizona state Rep. Brenda Barton spoke out during the government shutdown about the tyranny of "De Fuhrer," Barack Hussein Idi Amin Hitler.

Ah, but all of these were as a fart upon a summer's breeze in comparison to the achievements of Stacey Campfield, who brings Gohmertesque levels of stoopid to all that he does. It's really pretty impressive -- Campfield's capacity for petty legislative awfulness first came to our attention way back in 2011 when he first introduced the "Don't Say Gay" bill, which would have prohibited classroom teachers from mentioning the existence of homosexxers. That thing stank so badly that George Takei generously offered to loan Tennessee kids and teachers "Takei" as a substitute for "gay."

Undaunted by the mockery leveled at Tennessee (and the failure of his bill in the state Senate), Campfield insisted that AIDS all got started with a single monkey-fucking airline pilot (he read it somewhere) and in January of this year introduced a new variation on "Don't Say Gay" -- this time his dream bill would not just bar K-8 teachers from mentioning the ghey, but would also require teachers and counselors at all grade levels to notify parents of students who identify themselves as LGBT. You know, to protect the kids from dangerously gay behavior. He later attempted to clarify that he didn't want to out any gay kids, just to keep them from being abused -- which is odd, since Tennessee already has reporting requirements for child abuse.

But that wasn't all -- also in January, Campfield introduced a bill to cut welfare for families if their kids' failed to make “satisfactory academic progress,” because nothing motivates poor folks to academic achievement like being even poorer. At a hearing on that proposal, Campfield mocked an 8-year-old-girl who presented him with a petition opposing the bill, saying,

“How are you? Thanks for coming,” Campfield told the girl. “I love it when people use children as props.”

And then there was the little stuff, the character stuff -- like his attempt to redefine his blog as a private communication between himself and people who like him, so if anybody (especially the Knoxville News Sentinel) quotes him, they'd owe him to the tune of $1000 a word. Needless to say, everyone had a lot of fun with the idea that a guy who writes laws apparently has no idea what "fair use" is. And his charming habit of yelling at people. And his imaginary girlfriend. Her hypothetical existence came to light during the libel case he lost -- and for which he then vowed not to pay the court-ordered damages. Lucky for Campfield, the case got tossed, because a sympathetic judge decided that while Campfield had indeed lied, he had come by his lies honestly. Also, to help protect imaginary aspirational families like his, he moved to shut down "Sex Week" at University of Tennessee-Knoxville by threatening to defund the entire damn university. He even did his part to protect Christmas from the imaginary war being waged against it, because there isn't a single terrible Republican idea that Stacey Campfield doesn't want on his résumé as well.

Stacey Campfield: A man, a plan, a shitmuffin.