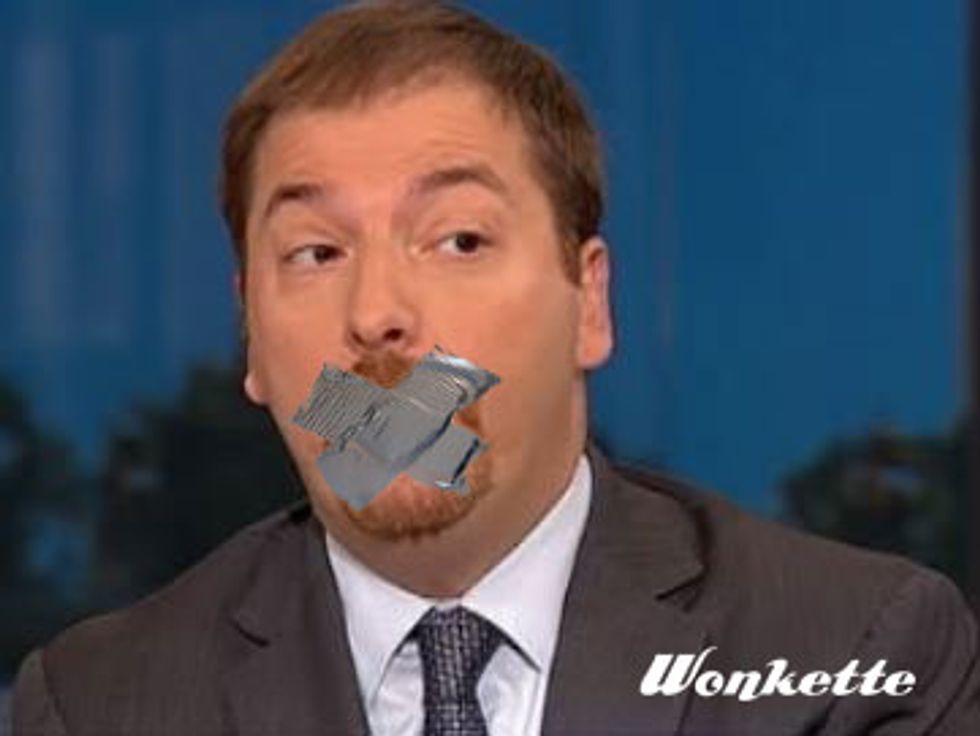 Chuck Todd loves nothing more to magisterially pronounce the end of things (and then sheepishly apologize). A few weeks ago, he determined, in his usual godlike way, that Alison Lundergan Grimes had "disqualified" herself for the U.S. Senate by refusing to answer a question about who she'd voted for. (Considering she was an Obama delegate, it was probably Obama, but WHO CAN EVER KNOW???)

"DQ!" shouted grand umpire Chuck Todd, blowing his whistle (his whistle is his penis). "TOO MANY MEN ON THE FIELD PROBABLY I DON'T KNOW I AM A GIRL AND DONT UNDERSTAND SPORTS." (Me. Not Chuck Todd. Chuck Todd probably does understand sports, because he is super manly which he proves by growing ugly facial hairs.)

Then he was all oh never mind, I guess I shouldn't have said that, my bad, I am a giant douche. (Direct quote.)

Well, what is Chuck Todd pronouncing the end of today? Just the Democratic Party being the "party of Obama."

For those of you who wished to spare your ears having Chuck Fucking Todd in them, he declared that Democrats this cycle were begging Bill Clinton to come stump for them, but were not begging that stupid Barack Obama to come campaign for them, because he has cooties. Black cooties even. (Black cooties are like regular-white-people cooties, except they're super-good dancers, and they talk Jive.)

OH THAT IS GOOD TO KNOW! We for one LOOOOVE when Chuck Todd tells us who our party belongs to -- us? Does it belong to us? Hahahahhahaa get the fuck out, of course it doesn't. It "belongs" to Bill and Hillz, because "super good reason here."

Have some crap Dems been running their little tootsies away from the president (and his fucking stellar accomplishments) just as fast as they possibly can? Sure. Just like President Al Gore did.

Some of our more Nadery readers will sniff about drones and the NSA and Eric Holder being a dick. Sure, jerk off about how much of a plutocrat Our Bamz is in the comments, dudes. Let er rip! You are allowed to disagree with us, and sniff, and moan, and be giant tittybabies! (You know who would be way better about drones and the NSA? Hillary Clinton jkjkjk lololol.)

Some of us like our Bamz. Some of us FUCKING LOVE OUR BAMZ. Some of us know that he has had a shitstorm of Mitch McConnell and Ted Cruz to deal with, and no amount of triangulating is going to get a Surgeon General confirmed because NOBODY is going to get confirmed, because Bamz's opponents are not playing beanbag or however that stupid saying goes, and without a Nancy Pelosi whipping a Dem majority into shape until they pass Obamacare one day, immigration reform the next, and cap it off with cap and trade because they had some time left over before lunch, it is NOT ACTUALLY HIS FAULT that the GOP congress is a bunch of fucking hostage-taking lunatics.

In conclusion, Shut the Fuck Up, Chuck Todd. You are bad at your job, and nobody likes you :(