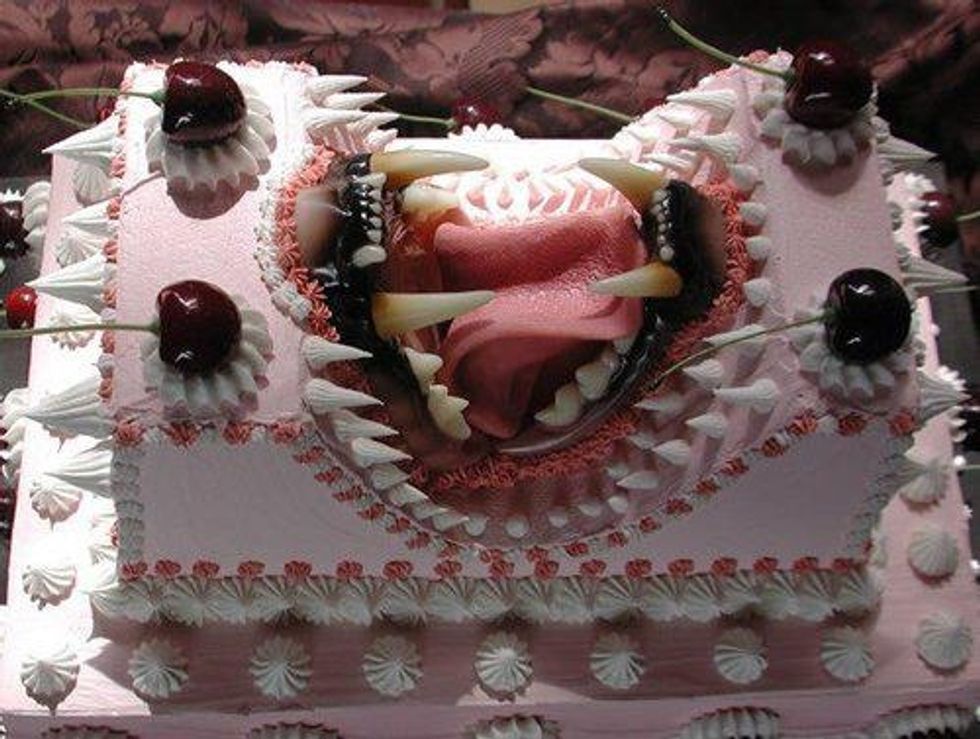 So you think you know what slavery is. Maybe you only just realized it was "really really bad." Or maybe you already knew it was "really really bad," so anything that you don't like because it is really really bad is just exactly the same thing. "Ronan Farrow's new show is slavery." "That dry overcooked chicken was slavery." "Being forced to rent hotel rooms to black dudes against my will because the Civil Rights Act demands that if I am the proprietor of a 'public accommodation,' or public-facing inn, restaurant, or retail establishment, I may not discriminate on the basis of color, race, religion, or national origin, is slavery."

Luckily, Judson Phillips, president of Tea Party Nation, is here to explain what slavery actually is, and it is being forced to bake cakes shaped like penises, because that is exactly what is going to happen now that Jan Brewer has vetoed the "religious freedom to discriminate" act SB 1062. Let us hear some more. HINT! IF YOU ARE AT WORK! WE WILL NOW SEE CAKES SHAPED LIKE PENISES! TO ILLUSTRATE 'SLAVERY.' NOT SAFE FOR WORK!

Judson Phillips, tell us again about slavery! Is this slavery?

Or did you have something else in mind?

Why is this bill so important and what did it mean for not only Arizona but America?

The issue can be boiled down to one word: Freedom.

The left and the homosexual lobby are both pushing slavery using the Orwellian concepts of “tolerance” and “inclusiveness.”

To be fair, because we are always fair, Judson is not specifically railing against the provisions of the Civil Rights Act and calling them slavery; that was just a bunch of yahoos on Twitter, who, goaded by Damian clone Ben Shapiro, whose childhood back yard might yield an answer to the long-ago mystery of What Ever Happened to the Neighborhood Cats, explained time and time again that the state cannot force you to enter into contracts (i.e., serve people you don't want to in your business that is open to the public), because that is the same thing as slavery. It turns out Rand and Ron Paul aren't the only Americans who think the Civil Rights Act is un-American. It also turns out that Ben Shapiro's flying monkeys may not be as numerous as Michelle Malkin's flying monkeys, but what they lack in numbers they make up for in brain damage.

But wait, you are saying. What about the penis cakes? Judson Phillips, president of Tea Party Nation, can you peniscakesplain?

Is it this one?

How about this one?

Maybe this one, for the ladies?

This is your gay wedding penis cake right here.

You can tell, because it has a butt in it too. You're welcome, Gaymerica! Now let's go make some slaves!

[RightWingWatch / most cakes from TheLuxurySpot]