Allen West Running From Marxist-Bigot Lynch Mob, Save Him With Campaign Donations Immediately 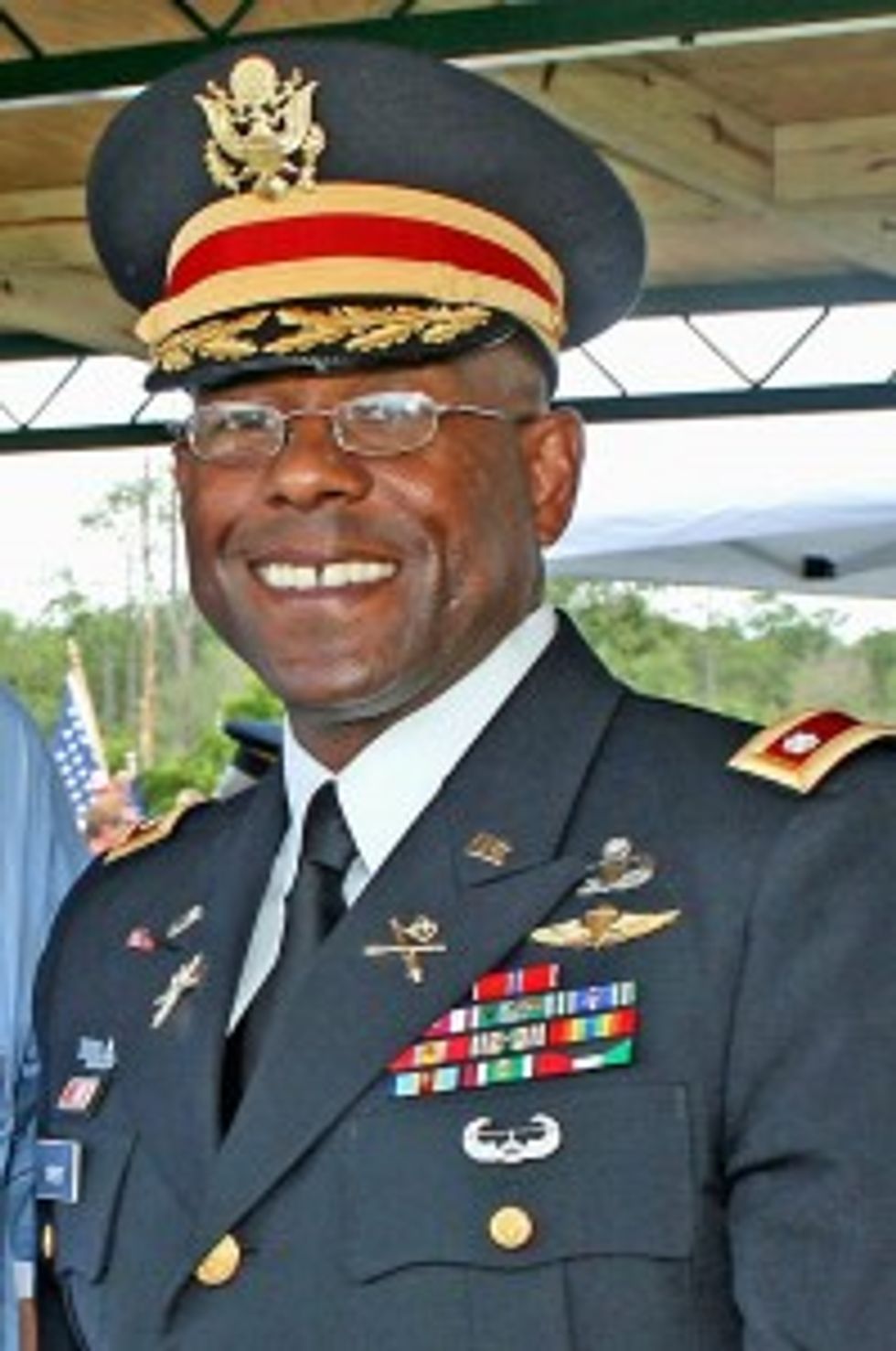 You guys, we gotta help Allen West. You remember him — he's the congressman who spends his timeattacking MSNBC's patriotism and celebrating D-Day while remaining completely silent on actual issues like military rape legislation. He's got no problem saying we should just be chaining Muslims to the side of rockets because their religion doesn't count and who cares if Muslims aren't actually trying to kidnap him. He haaaates Islam. Hates it like chameleons hate paisley. But he was in the Army so it's not a bad thing, in fact it's an awesome thing, and we should all be very thankful that he tortured an Iraqi policeman.

Earlier this week, this Great American Hero was attacked. He was the subject of a vicious, unforgivable, horrifying racial statement, and Allen West gets very agitated when someone makes a sweeping generalization about a group of people Allen West belongs to.

And, to add painful insult to crippling injury, this sweeping generalization came from the most vile of Obama campaign staff members: Bill Fucking Maher.

Wait, what's that? Bill Maher isn't associated with Obama's campaign? He's just some guy who sneers at stupid people on television? Well, he contributed money to Obama's campaign, so that pretty much makes them the same person. No one shitty has ever donated to a Republican.

This offense could not be overlooked. It's terrible, and people need to know — so West sent out an email this week to supporters (addressed as "Dear Patriot") that says "Obama’s million-dollar Super PAC donor and 'comedian' Bill Maher leveled racial smears against Allen West."

Whoa. That sounds pretty bad. So what did Maher say, that left-wing loon, that bigot, that insidious fascist socialism-humper and reader of Engels and Marx? Well, he wrote a blog post earlier this week. He titled it "The Right Shift," and in it he complains about how Congress can't do anything because the Republicans won't compromise:

The idea that the blame for our government’s dysfunction is equally shared by the parties just is a giant, steaming mound of horseshit and anyone who has paid attention to politics over the last 20 years knows it. Or as I like to call it, “The Rise of the Party of the Apes.”

Did you see it? Did you catch the racism? Well it's there, dammit, look harder — this is important.

Maybe a little context will help. If you look farther down in Maher's post — six paragraphs down, to be exact, past mentions of white dudes Thomas Mann, Norman Ornstein, David Beckham, Barney Frank, Dick Lugar, and Richard Mourdock — Maher cites West as an example of how Republicans have whole-heartedly embraced the Church of Lunacy and are taking daily trips to sacrifice women and poor people at the frenzied altar of Individual Freedom:

Or take Allen West. Seriously, take him to the padded cell and give him 20 CCs of the high test. Ornstein and Mann start off their Post op-ed by noting that recently Rep. Allen West said that there are “78 to 81” Democrats in Congress who are members of the Communist Party. And not one Republican said, “Allen, come on. You’re making us look dumb.”

Ah-HA! THERE IT IS. THERE'S THE RACISM. Maher said "apes" and "Allen West" in the same loose collection of words, and that means Democrats hate black people, and poor, fragile Allen West, wounded from his years of noble attacks on entire religions, is really busted up. How could Maher do something like this? And how can we ever fix it?

Don't worry. Allen West knows how we can fix it: Give him money.

West posted a plea on Facebook asking his followers to "Fight back against top Obama SuperPAC donor Bill Maher's racial attacks." He followed it, rather astutely, with "Donate here."

He also cooked up a graphic to go along with the request for campaign funds. It's captioned, "OBAMA SUPERPAC DONOR BILL MAHER SAYS ALLEN WEST LEADS PARTY OF THE APES."

No, you didn't miss anything — Maher never said West was "leading" the party. But we're getting outraged here, and if Allen West wants to be mad about the "Party of the Apes" but also take credit for leading it, then that's his business. Don't be so RACIST. Gosh.

It would also be racist to expect West to actually respond to the criticisms in Maher's post, and it would be even racister to point out that when Democrats have alleged critics of racism, West has called it "that very nefarious theme of the race card" and "absolutely reprehensible." He's also said it's "absolutely the last card in the deck, and that shows how weak their ground is."

He also once called Eric Holder's racism claims "a slap in my face as a professional African American member of Congress." That's right — West shot down the race card, with the race card. Let's not even get into that time he said Democrats were "nothing more than overseers of this 21st-century plantation" and declared himself "a modern-day Harriet Tubman."

Are you starting to think that maybe this is all just kind of a disingenuous attempt to raise money? Well SHAME on you. And SHAME on the media, which was preemptively blamed by Outraged Zombie Breitbart for hypothetically not covering this case of fictional racism as a case of actual racism:

Rest assured, the media still won't cover Maher's indefensible attack, even after one of the most well-known Congressmen in the country calls attention to it... Like much of the media that protects him, Maher is rich, white, privileged, and powerful and therefore can say anything he pleases about a black man. You know, as long as it's one of "those" black men -- the kind that doesn’t behave the way the rich, white, powerful and privileged think he should.

See? The media's protecting Maher because they're white. It's a big, scary white conspiracy, and if you don't think so, THEN YOU'RE PART OF THE CONSPIRACY TOO.