Allen West To Head Up 'Think' Tank. Stop Laughing, You Guys, It's Not Funny. 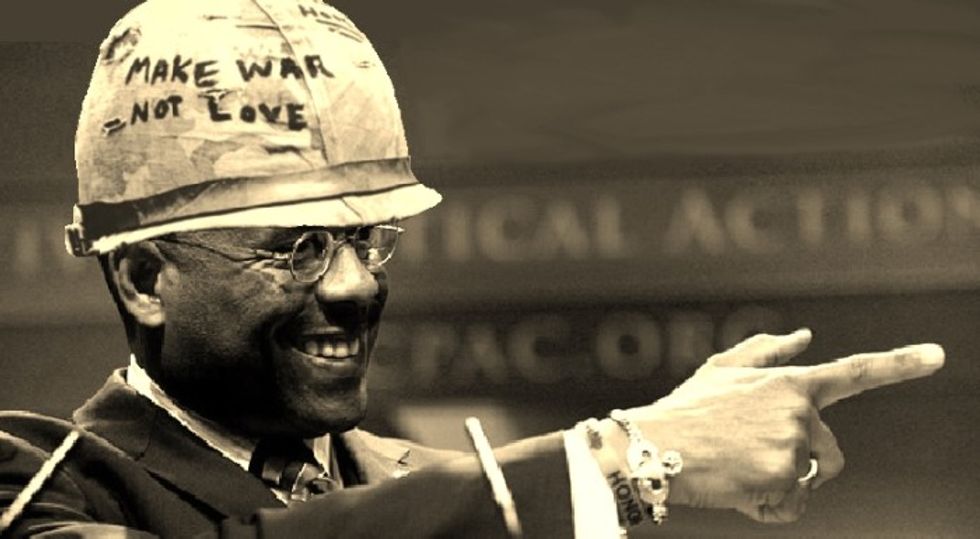 Congratulations to disgraced torturer ex-Rep. Allen West on finding a jerb! (We were going to say "honest work," but this is Allen West we're talking about, after all.)

According to a big ol' press release, come Jan. 2, 2015, the former disgraced colonel and former one-term congressman will become CEO of the "National Center for Policy Analysis," a Dallas-based think tank that shills for the oil and insurance industries and thinks that global warming is a big conspiracy. And yes, it probably gets money from Koch Industries, too.

West is understandably excited about his opportunity to contribute to the work of this important institution:

"I am humbled and honored to have this opportunity to lead one of the country's preeminent think tanks," said West. "I have long admired the NCPA's innovative research in health care, tax reform, entitlements, retirement, energy, environmental and education policy."

West added, "I believe one of the NCPA's strengths is that it is not headquartered in Washington, D.C. Working from the nation's center, I believe the NCPA's future is that of a leader in economic research as the most trusted policy analysis voice in America -- philosophical, principled and policy proficient."

"It will be policy, not politics that secures a sound economic future for Americans -- with growth, opportunity and returning the promise of the American dream for this generation and those to come," West added.

Translation: With revenue from my stupid inaccurate book starting to peter out, I sure am glad I landed somewhere I can keep grifting off donors to rightwing causes!

Per the glowing press release:

Allen is a true Policy Patriot, bringing many years of public service experience to the NCPA. He joined the military in 1983 and served in Operation Desert Storm, Operation Iraqi Freedom and Afghanistan. Over his 22 years of service in the U.S. Army, he received numerous commendations and honors for valor, including a Bronze Star, three Meritorious Service Medals, three Army Commendation Medals and a Valorous Unit Award.

Also, there was the sudden end to West's service in 2003, with an ultimatum that he resign or be court-martialed after staging a mock execution of an Iraqi prisoner, but they can't be expected to include every little detail. Besides, he had to torture the dude, as he testified at his hearing:

"I know the method I used was not right, but I wanted to take care of my soldiers," West testified to a military courtroom of observers and some teary-eyed troops formerly under his command.

Asked if he would have act differently if under similar circumstances again, West testified, "If it's about the lives of my soldiers at stake, I'd go through hell with a gasoline can."

We are such meanies, we know, dredging up the past like that.

After retiring from the military, he became the first black Republican from Florida to serve in the U.S. House of Representatives since Reconstruction. He is a senior fellow at the London Center for Policy Research and a contributor on FOX News Channel.

Yes, he did serve that one term in Congress -- but again, minor details -- before heading to Fox News, the home for retired and fired conservatives.

Also not so much mentioned in the big hiring announcement was this summer's leadership purge at the NCPA following allegations of “sexual misconduct and breach of fiduciary duty” at the think tank, which led to the firing of the previous CEO and the departure of over half its board members. According to D Magazine's blog, CEO John C. Goodman (who never starred in King Ralph, let alone any Coen brothers movies) was quietly shunted aside as part of "an extraordinary arrangement that was made with an NCPA employee named Sherri Collins, after Collins accused Goodman of assaulting her in a Southern California hotel room in 2012."

What kind of extraordinary arrangement are we talking about here?

To avoid threatened litigation for violating “both state and federal discrimination laws” over a period of many months, Goodman agreed to promote Collins from an assistant’s position to be the NCPA’s director of human relations, at a yearly salary of $85,000, plus a guaranteed annual bonus and other benefits, for at least three years, sources say.

Oh. That kind of arrangement. Yep, this sure seems like the perfect fit for Allen West. Disgraced, jobless rightwing icon -- you know, "war hero" -- meets rudderless, also disgraced rightwing think tank, and everybody's happy! Congratulations to the happy couple! Won't be any illicit sexxytime scandals for the new CEO, because we already know what a romantic he is.

We're betting that under Allen West's brave leadership, the National Center for Policy Analysis will be a very serious group that advocates sober reflection of important issues facing our nation and then advocates resolving those problems by bombing them off the face of the Earth and whining about the liberal media. Or as West puts it:

We want to align ourselves with the fundamental principle of governance of America as a Constitutional Republic and promote the principles of limited government, fiscal responsibility, individual sovereignty and free market economy. We should focus not on party but rather effective and efficient governing policy. We want our message to reach the kitchen tables of the everyday American.

So yeah. Allen West will continue blaming Barack Obama, Big government, and the gays for all of America's problems, just like he always has, but with new stationery. Great work if you can get it.