America About To Run Out Of Money Again But Speaker Ryan Says It's Cool, Brah 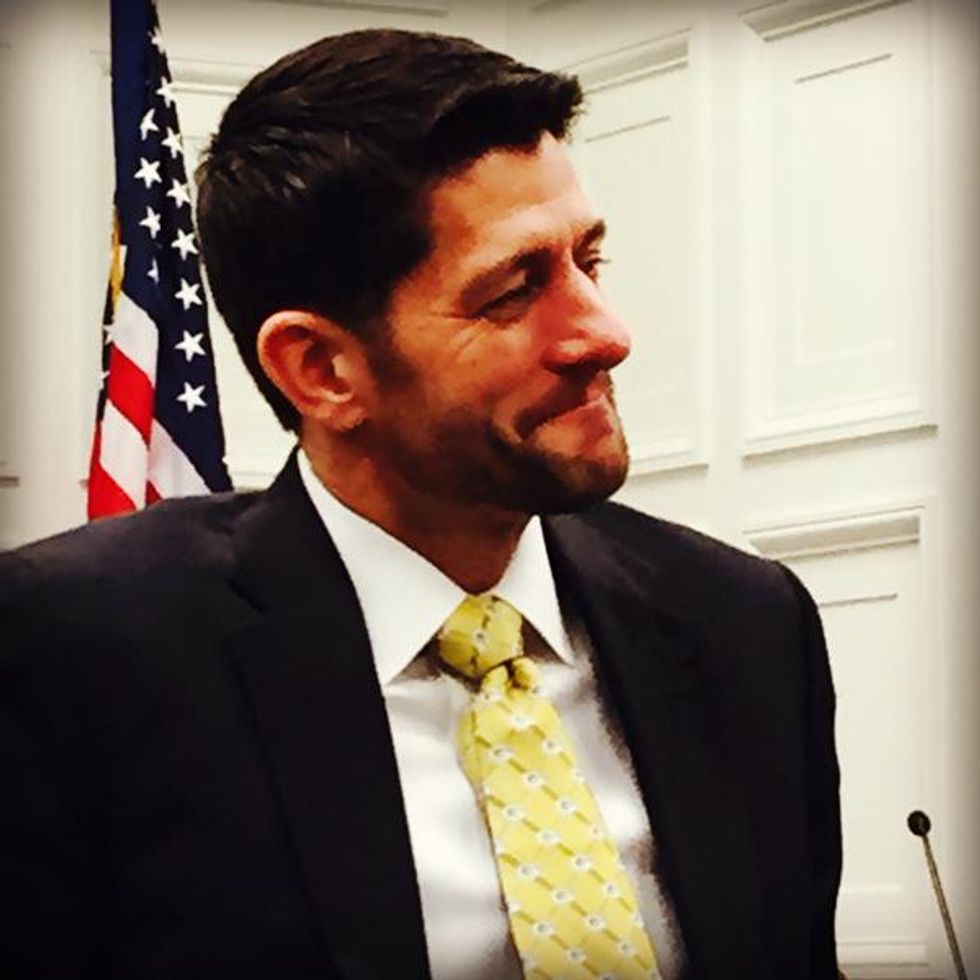 Dude, what's that thing on your face?

While our fearless leaders in Congress have been busy surrendering to ISIS and repealing Obamacare (yes, again) and sleeping on it to decide whether Donald Trump does or does not represent the Grand Ol' Party, the little matter of how to keep America's lights on is once again upon us. The deadline for funding our great bombin' adventures and abstinence-only sex ed in public schools and occasionally patching up some potholes and seizing our guns and delivering our mail and whatever the hell else our Big Government does is only a few days from pretty much nowish. If Congress doesn't figure it all out by Friday, Dec. 11, well you know that means, kids. It's government shutdown funtimes again!

While senior Republicans are confident they will reach an agreement on the yearlong funding measure at some point, it appears increasingly likely that no deal will be in place by the Friday Dec. 11 deadline, meaning a short-term spending bill will have to be enacted in order to avoid a repeat of the 2013 shutdown. And without a compromise to present on Monday, members and senators have a tense week ahead as Congress rushes to complete its year-end work and depart for the holiday season.

But that's not going to happen. On Tuesday, fresh new Speaker Paul Ryan (R-Hipsterville, Apparently, With That Ridiculous Beard) announced fuck it, they won't be able to get their job done in the time allotted, so new plan, same as the old plan. Again:

The House will pass a short-term bill to prevent the government from shutting down this weekend, Speaker Paul Ryan said on Tuesday. [...]

The government is currently operating under a short-term spending bill that expires at midnight on Friday. The new stopgap spending bill will buy time for talks on the bigger measure.

"We need to get it right," Ryan said of the broader measure. "I don't want us to go home until we get this done."

Sure, just another temporary patch to extend the current temporary patch that extended the last temporary patch because Republicans don't want to pass a real funding bill for an entire year unless it defunds and undoes everything, from Planned Parenthood to the Labor Department's new rules to your mom's under-the-mattress rainy day stash of cash. Democrats, not being nihilist fungus-covered cunt-gadgets who want to drown America in the bathtub, are not down with doing that.

If only Republicans who control the entire U.S. Congress hadn't had to spend all that time having a UNBECREDIBLE breakdown after Boehner told 'em to take this job and shove it, and if only they hadn't had to spend that entire day being outsmarted by Hillary Clinton on The Benghazi, and if only they hadn't had to waste god knows how many hours investigating Planned Parenthood's black market Baby Parts Qwik-E-Mart, maybe they'd have time to figure out a proper year-long funding bill, like how their job says they're supposed to. But you know. Priorities.