America Almost Out Of New Ways To Increase Gun Deaths? Trump And Republicans To The Rescue! 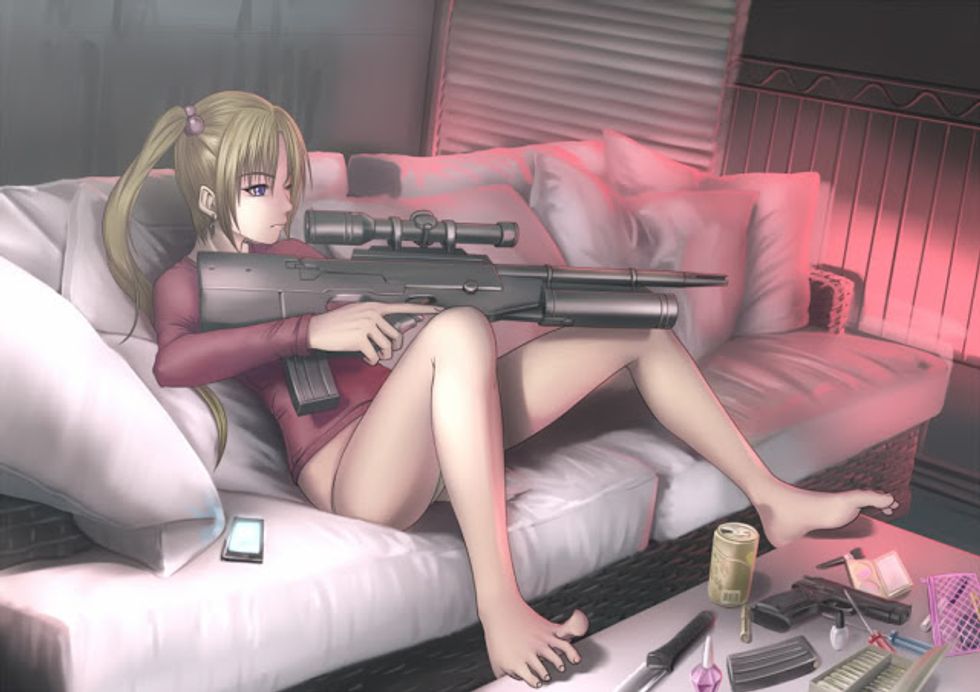 In a country where there are more guns than people, it seems we may be running short on ways to make guns more ubiquitous, but you should never underestimate the American knack for innovative approaches to problems like the fact that we currently have only 112 guns per 100 Americans. That really should be an average of at least two guns per person, shouldn't it? Fortunately, now that the GOP dominates both the national and state governments, we can look forward to even more creative opportunities for getting more guns in the hands of more people, and when everyone is finally armed, we'll finally become the polite society the NRA keeps promising.

Donald Trump has signed that bill killing an Obama administration rule that added people who are too mentally ill to manage their own affairs to the national criminal background check database, so now people with severe mental illnesses can purchase a gun without any interference from Big Government. And while the regulation did have an option for people to appeal if they were denied a firearm, it was apparently still too restrictive of the basic right to have a semiautomatic rifle with a 100-round magazine, so now it's history. This one's mostly symbolic either way, since only about 75,000 people nationwide were affected by the regulation, and it's unclear whether more than a few wanted to have a shootin' iron. But now they have the same opportunity to shoot up an elementary school as the rest of us!

Some Florida legislators are concerned about the increasing number of children killed or injured by guns in recent years -- the Tampa Bay Times estimates that since 2010, child deaths by gunfire are up 20 percent, and injuries up 36 percent. So what does the head of Florida's Senate Judiciary Committee want to do about that?

“We could do away with gun-free zones,” said Senate Judiciary Committee Chairman Greg Steube, R-Sarasota, naming a key piece of the National Rifle Association’s agenda in Florida. [...]

“There’s not a school resource officer in every one of our elementary schools,” he said. “If a terrorist wants to come in and start shooting our kids, there’s nothing to stop them.”

The Tampa Bay Times analysis didn't specify what percentage of shootings affecting children took place in schools -- school shootings are extremely rare to start with -- but did find that firearms-related accidents had increased more quickly in the five-year period than had assaults or suicides. Not quite clear, then, how allowing more guns around schools might increase safety, but since so many gun owners believe themselves to be Rambo, it's probably a terrific idea.

One Florida law that actually did seem to work was a 1989 measure requiring gun owners to keep weapons secured when children are around:

Under the law, which remains on the books, a gun owner can face second-degree misdemeanor charges if a child 15 or younger accesses his or her weapon and takes it to a public place or waves it in a threatening way. If the child uses the weapon to kill or injure someone, the gun owner can face third-degree felony charges punishable with a fine up to $5,000 and up to five years in prison.

The Law Center to Prevent Gun Violence said the law had resulted in a 51 percent reduction in unintentional deaths of children. But as time has gone by, awareness and enforcement of the law seems to have diminished; in 2014, the Florida League of Women Voters found fewer than half of the 30 gun stores they checked actually posted a mandatory warning about the law, and between 2010 and 1016, there have only been nine felony convictions of people who left guns where kids got to them. Some Democrats in the Florida legislature want to tighten the law to actually require a trigger lock or gun safe; the current law says a firearm only needs to be stored where "a reasonable person would believe it to be secure.”

Several other proposals for keeping guns away from kids in homes are also being proposed, but let's not get too excited about any of them getting a vote. They'd have to make it past state Sen. Steube, who thinks the current law is plenty strong enough, and safety should be left up to individual responsible gun owners. He says he always keeps his guns in a safe when his 6-year-old son is around, and that any smart gun owner would do the same. He apparently is unaware that plenty of gun owners are not smart, or at least wouldn't dream of imposing actual safe behavior on them. The NRA may advocate for members to store guns safely, but once a state talks about requiring exactly what the NRA recommends as a good practice, that's tyranny.

Instead, Steube is hot to allow concealed weapons to be carried in schools, on the off chance that Janitor Rambo could take out a mass killer or terrorist. Why address the more common sources of danger to kids when it's a lot sexier to fantasize about the glories of a lone hero stopping a massacre?

And finally, there's the bill introduced Monday by Texas Sen. John Cornyn, the Senate's number 2 Republican. The "Constitutional Concealed Carry Reciprocity Act" would mandate that all states recognize concealed carry permits from other states. So even if one state's concealed carry law requires extensive safety training and a background check for its citizens, that state would be obliged to recognize concealed carry permits from Kansas, which allows people to decide for themselves if they're qualified to have a concealed weapon. Cornyn says his bill "strengthens both the constitutional right of law-abiding citizens to protect themselves and the power of states to implement laws best-suited for the folks who live there," so everybody's free, especially the folks from states without any particular rules on concealed carry, who shouldn't be prevented from going armed if they cross a border into some wimpy blue state that is full of gun-grabbing tyrants.

As more and more states allow guns in more and more places, we worry there may eventually come some point of diminishing returns on relaxed firearms regulation -- how long until the NRA starts lobbying for other measures to boost gun sales, like mandating that voters carry a gun to the polls?

Yr Wonkette is an ad-free zone. Help keep it that way with your generous donation, especially since it's likely to piss off Wayne LaPierre.